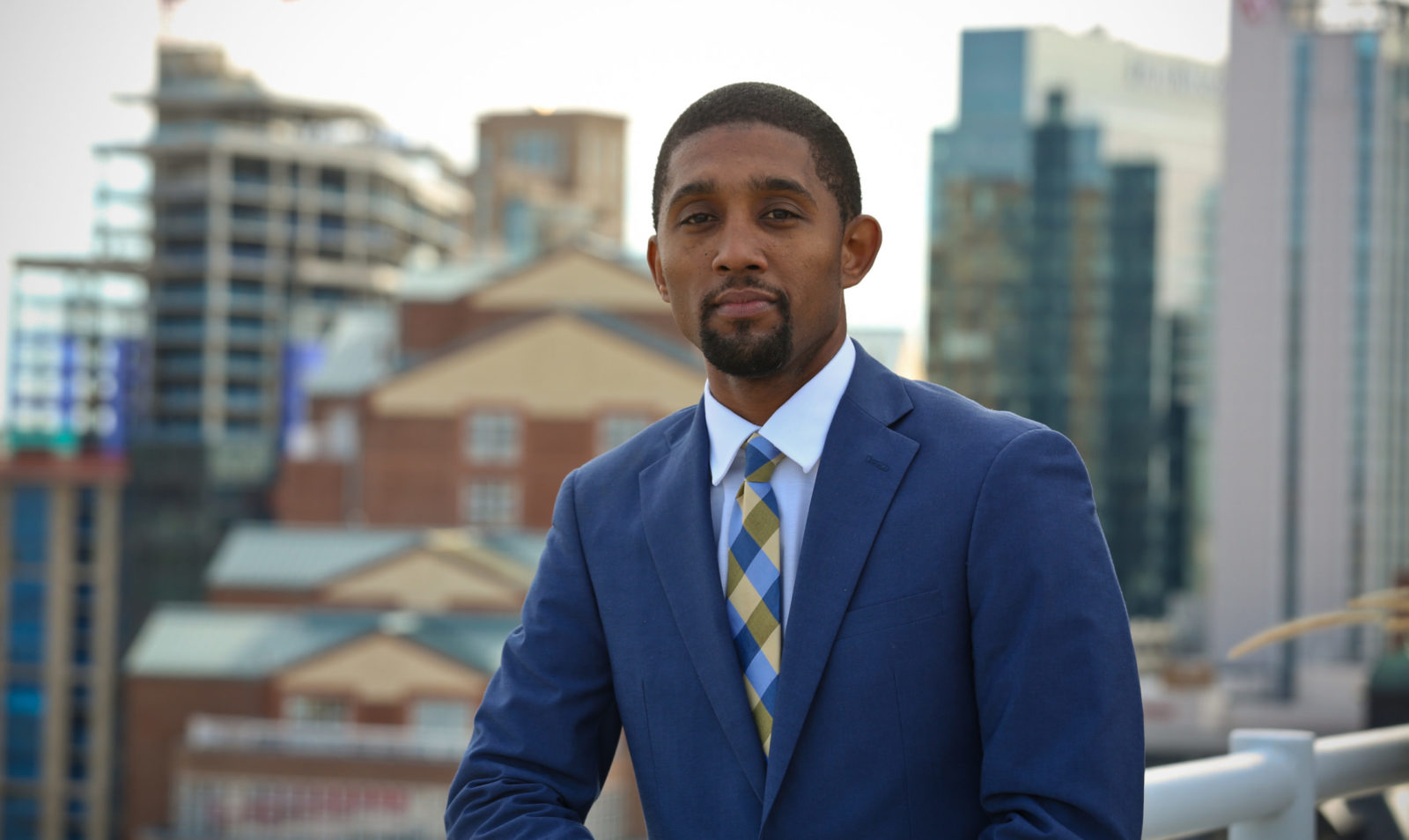 A new millennial mayor on the horizon in Baltimore

Baltimore City Council President Brandon Scott is gearing up to become the city’s youngest mayor in more than 100 years.

Scott, 36, is facing a general election this November, after picking up the Democratic nomination in a tight and crowded race in early June. But in Baltimore, where every mayor since 1963 has been a Democrat, the election is all but decided in the primaries.

Still, Scott says he is taking nothing for granted.

“I don’t take any competition lightly,” he told Jewish Insider in a recent interview. “So I’m going to campaign for the November election the same way I campaigned for the primary election.”

Scott ultimately won with 29.36% of the vote, just eking out a win over former Mayor Sheila Dixon, who received 27.73%. The mostly mail-in election was decided close to two weeks after the primary was held. Scott believes his message of city-wide outreach and restoration of trust was what propelled him to victory.

“As we were saying throughout the campaign, we were the only candidate that could actually speak to every group in the city, and have a broad range of support throughout the city: white, black, old, young, gay, straight, rich, poor,” Scott said.

And the city council president has also built a strong base of support among the city’s Jewish community. Though a last-minute letter was published by a handful of community members supporting candidate Mary Miller, Baltimore City Councilman Isaac “Yitzy” Schleifer told JI that Scott was always the real favorite.

“The Jewish community overwhelmingly supported him,” Schleifer said, pointing to a letter of endorsement from Rabbi Sheftel Meir Neuberger, president of the local Ner Israel Rabbinical College, who issues a personal slate of endorsements each election cycle. The community rallied behind Scott, Schleifer posited, because “we all understand that we’re one Baltimore… we need a leader who’s going to be a leader for all of Baltimore, and we just didn’t feel that any of the other leading candidates could be or would be that leader.”

Scott grew up in the Baltimore neighborhood of Park Heights, a majority Black area that is also home to a large concentration of Orthodox Jews.

“I grew up in the southern portion, of course in Park Heights now you have basically two portions,” he said. “It was a very unique situation, because we learned a lot about the Jewish community. But that dividing line in Park Heights separated two different worlds.”

That experience symbolizes one of the key issues Scott is looking to overhaul once in office — the “structural racial inequity” in the city’s housing policies. He pointed to legislation he helped pass in 2018 in the city council — later ratified by voters — requiring city agencies to assess current and proposed policies through the lens of racial, gender and economic equity.

“I’m glad that I’m going to be the person to have to implement it,” he said. “We have to begin to be a city that invests in the promise of our young people and not their failure.”

Scott, who was first elected to the city council in 2011 at age 27, won his election at the outset of a wave of anti-racism protests that have swept the nation. But the city council president noted that Baltimore is ahead of the curve when it comes to police reform, pointing to the federal consent decree of 2018 that required significant changes in the city’s police department — stemming from widespread 2015 protests after the death of Freddie Gray in police custody.

“We’re already engaged in the police reform effort. This isn’t something new,” Scott said. “Long before anyone was talking about ‘defund the police’ with a hashtag,” he said, the city has been working toward “responsibly, over time,” reducing the police department’s budget.

“We know that the way we’re going to see our city become the safe city that we want it to be — it’s not simply going to be about the police,” Scott said. “We have put too much burden on our police department,” he added, saying funds needed to be redirected to mental health counselors, social workers, addiction treatment and housing. “We have to reimagine what public safety means. But we can do that in a way that’s responsible, that does not also put people at risk.”

Schleifer, chairman of the Baltimore City Council’s Public Safety Committee, said the city is already working on many reforms. “The things that people are calling for are things that we’ve already been doing,” he said, pointing to body cameras for police officers and a shift to a community policing model.

The friendship between Scott and Schleifer, which predates their time on the city council, has only grown over their past four years serving together.

“I was involved in community stuff, he was involved in community stuff as well, even as kids,” Schleifer said. “We come from the same side of town, but we have two different life experiences. And so, having that well-rounded viewpoint, I think, will help both of us shape policy but, most importantly, provide for the variety of needs that the people of Baltimore have.”

Scott told JI that his longstanding ties to the city’s Jewish community have helped shape his approach to Baltimore.

“For me it’s about building bridges, it’s about building levels of understanding, about showing people how much we have in common, and not just focusing on the differences,” he said. Scott even celebrated Purim this year for the first time — “which was a great experience and very unique” — dressed up as his friend Schleifer.

Scott admitted that there have been tensions between the city’s Jewish and Black communities, but he believes things are on an upswing.

“The relationship between the African-American and Jewish communities in Park Heights is a lot better than it was when I was a kid,” he said. “But it’s nowhere near where it needs to be.” Still, he added, “people have made a very, very deep effort to try to work on issues,” and he wants to make even further progress as mayor. “We have to have someone who’s going to bring us together, force us to be uncomfortable — that’s the only way that we’re going to move forward.”

And he is keenly attuned to the community’s concerns over growing antisemitism in the United States.

“That kind of stuff is unacceptable,” Scott said. “I take that stuff very seriously… we’re going to continue to monitor and the community knows that they have my full support.”

Schleifer paints a somewhat rosier picture of the relationship between the Black and Jewish communities in the city.

“There’s certainly people on both sides who may create tensions,” he said. “But there’s not a general tension between the Black and Jewish communities… the most well-run communities, where people get along the most, are the ones that are the most diverse,” he posited, pointing to the makeup of his own district.

“It really is the same handful of people who cause all the problems,” Schleifer added. “That doesn’t mean we’ve never had an issue,” he said, but today, “all groups are trying to work across the aisle and help each other.”

Dalya Attar, the first Orthodox Jewish member of the Maryland House of Delegates, whose district is entirely in Baltimore, threw her support behind Scott and is celebrating his win.

“I am extremely satisfied that he won the election and [I] have a rejuvenated sense of hope for Baltimore,” Attar told JI. “He had significant support within the Jewish community.” Attar said many within the community are hopeful that, once elected mayor, Scott will address “ensuring the safety of all constituents, finding ways to make living in Baltimore City more affordable and strengthening the relationship with the Jewish and African-American communities.”

Howard Libit, executive director of the Baltimore Jewish Council, said he has known and worked with Scott for many years.

“He forged a strong relationship with a number of institutions in the community,” Libit told JI. “He’s been there, he’s been engaged on issues that we care about… I’m excited that someone I know and respect a great deal looks likely to be elected the next mayor.”

Come November, a new young guard is slated to be elected to helm the city of Baltimore. Scott, at 36, is expected to become the mayor, while Schleifer, 31, won his own primary in June, and will return to the council, and the slightly more veteran Nick Mosby, 42, is projected to become the council’s next president.

Meanwhile, Scott says youth is far from the only thing he’ll be bringing to City Hall.

“It’s going to be about bringing that new energy, that new transformational leadership that wants to root out corruption, build new systems, make the city equitable, be accountable, be open and transparent with people,” Scott told JI, “and set Baltimore on the path to becoming the greatest comeback story in the history of our country.”