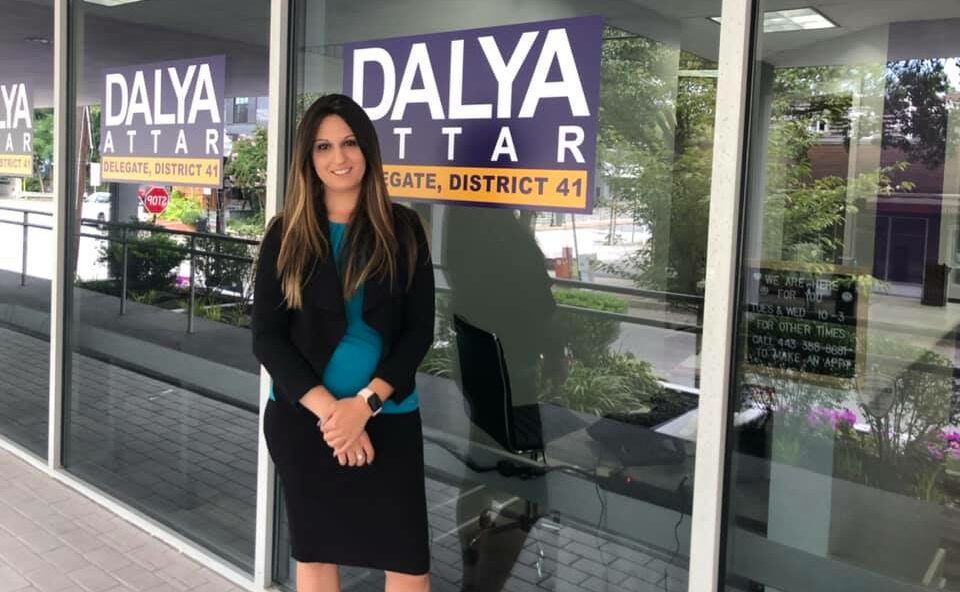 Dalya Attar says 'it's in our Torah that you have to help others, whether or not they look like you'

Just before Dalya Attar left her Baltimore office on a recent Monday for a day of meetings and her weekly drive to Annapolis, where she serves in Maryland’s House of Delegates, she quickly ate a salad, the last freshly prepared kosher meal she would consume until she returned home at the end of the week.

Attar is the first Orthodox member of the Maryland House of Delegates, but that hasn’t stopped the 29-year-old from mastering the art of being an Orthodox Jew in Annapolis. She packs kosher food that she prepared in Baltimore, selects books for the occasional Shabbat she spends alone at an Annapolis hotel during Maryland’s yearly General Assembly, which runs from January through April; and is developing an efficient plan for preparing for Passover, which begins less than 48 hours after the 2020 session ends in April.

Attar was elected in November 2018 among a wave of diverse Democratic female candidates — the most in the country’s history. “I was running for office at a time that many women wanted to step up and said, ‘It’s time for us now,’” Attar said. “We are just as strong as anyone else.”

The Baltimore native does not get caught up in the mudslinging and name-calling that can sometimes overtake politics. Her job, she insists, is to represent the people of Baltimore, not to think about “the drama” in Washington. She’s been doing that for six years as an assistant state’s attorney, prosecuting narcotics and firearms cases. “I was in the juvenile system, and I was just horrified by what I saw taking place,” Attar said — kids going to bad schools and sometimes coming home to a cold house with no food — so she decided “to go the policy side of things.”

Attar’s campaign was a big deal for the Orthodox community in Baltimore, where she has lived her whole life. The night she unseated two incumbents in an 11-way primary, Baltimore Jewish Life posted a simple headline: “Dalya wins!!!” Polling from the American Jewish Committee shows that a majority of Orthodox Jews voted for President Donald Trump in 2016, but Attar insists that the reality is more complicated, at least in Baltimore. “What I find is, many times, Orthodox communities are supportive of people who are supportive of Israel,” she posited. “That’s not always a Democrat and that’s not always a Republican.”

Israel has not been a focus for Attar, largely because, as she sees it, the Old Line State already supports the Jewish state. Maryland Gov. Larry Hogan signed an executive order in 2017 prohibiting the state from doing business with companies that boycott Israel. “Maryland has been supportive of Israel for as long as I remember,” she said.

Attar hopes that her position will change some of the misconceptions Marylanders have about the Orthodox Jewish community. “People assume that, ‘Oh, they just don’t care about anyone but themselves,’” Attar said. “We do believe in tikkun olam… It’s in our Torah that you have to help others, whether or not they look like you.”

Attar’s district, entirely within Baltimore City’s limits, tests this premise. “It’s one of the most diverse districts in Baltimore City, and representing everyone fairly and equally is extremely important,” Attar said. She acknowledged that racism and antisemitism exist in the district, but she focuses on bringing people together. “People want to get along,” Attar said. “People don’t want to have this idea of, I hate my neighbor simply because I hate my neighbor.”

Her slate of bills this session reflects her diverse constituency. She worked with the National Federation of the Blind to introduce a bill that would put braille on motor scooters. Another bill requires landlords to reduce the lead poisoning risk to tenants. Her one distinctly Jewish bill is facing a tough path to success.

The proposed law is meant to “help agunot women,” Attar said, using a Hebrew word that refers to Jewish women whose husbands refuse to sign a gett, a Jewish writ of divorce. Without the gett, an observant Jewish woman is unable to remarry in the Jewish community. What the law seeks to do is “basically not allow a man to get a civil divorce if he hasn’t given a gett yet,” Attar explained.

The topic is complicated and poorly understood, even by many Jews. “Our colleagues don’t fully appreciate that the rabbis are unable to address the problem,” said fellow Maryland Delegate Sandy Rosenberg, who has represented District 41 since 1983 and in 2007 introduced a similar bill that did not pass. But Rosenberg said that Attar’s work on the bill underscores what she does best: “working hard and working with others strategically.”

Attar traces her work ethic to her parents, both immigrants. Her Iranian father came to the U.S. to study engineering and was granted asylum after the Islamic Revolution in 1979. Her Moroccan mother came “to live the American dream.” Both learned that life in America, a “land of opportunities,” could be unforgiving and difficult. “They had very tough lives, trying to give their children the life that they never had,” Attar said.

The fourth of six children, Attar knew by middle school that she wanted to be a lawyer working on criminal justice. She attended Bais Yaakov, an Orthodox all-girls school, where Attar says she “was always the girl who thought outside the box.” She joined the debate team and questioned everything, which she admits “made my parents crazy sometimes.”

Although Attar’s ambition sometimes separated her from her classmates at Bais Yaakov, she had a handful of Orthodox Jewish role models. Attar viewed Sen. Joe Lieberman (I-CT), who famously maintained a Shabbat-observant lifestyle while serving in the Senate, as an inspiration. Locally, she admired Judge Karen Chaya Friedman, an Orthodox woman serving on Maryland’s highest trial court. As a prosecutor, Attar had appeared in court before Friedman, who has been on the bench for 19 years. “I’ve seen what she’s able to do and how much good she’s able to do in her position as a frum woman, and it was very inspiring for me,” Attar said.

When she first started in the legal field, it never occured to Friedman that she would be an inspiration for Orthodox women, “but if I’ve done that for Dalya or for other young frum girls, that’s terrific.” Even now, Friedman said, her path is uncommon for Orthodox women: “There are some standout exceptions, but I would say for the most part it’s still not widely done.” When Friedman met her husband three decades ago, she was upfront about her career goals. “There were people who discouraged him from pursuing going out with me because of that,” she explained.

Attar’s husband, a longtime family friend before they married, has supported her career from the beginning. Attar says her kids, ages six and seven, are proud of their mother, who they think goes to the White House with the president everyday. She has an endless list of issues she wants to address, among them providing job opportunities for “returning citizens,” or people getting out of prison; improving schools for children in the district; and keeping Pimlico, the race course that holds the Preakness Stakes, in Baltimore. The 90 days she spends in Annapolis for the legislative session are never enough.

“It’s a whole new world down there,” she said. But Attar, one of the youngest members of the legislature, is used to the pressure. “I worked full time when I was in school, I had both my kids when I was in law school, so I’ve always been moving quickly.”

Don’t expect her to slow down anytime soon.