Dr. Morris Hartstein has made 10 trips to to the African nation, distributing glasses and medications and overseeing hundreds of cataract surgeries 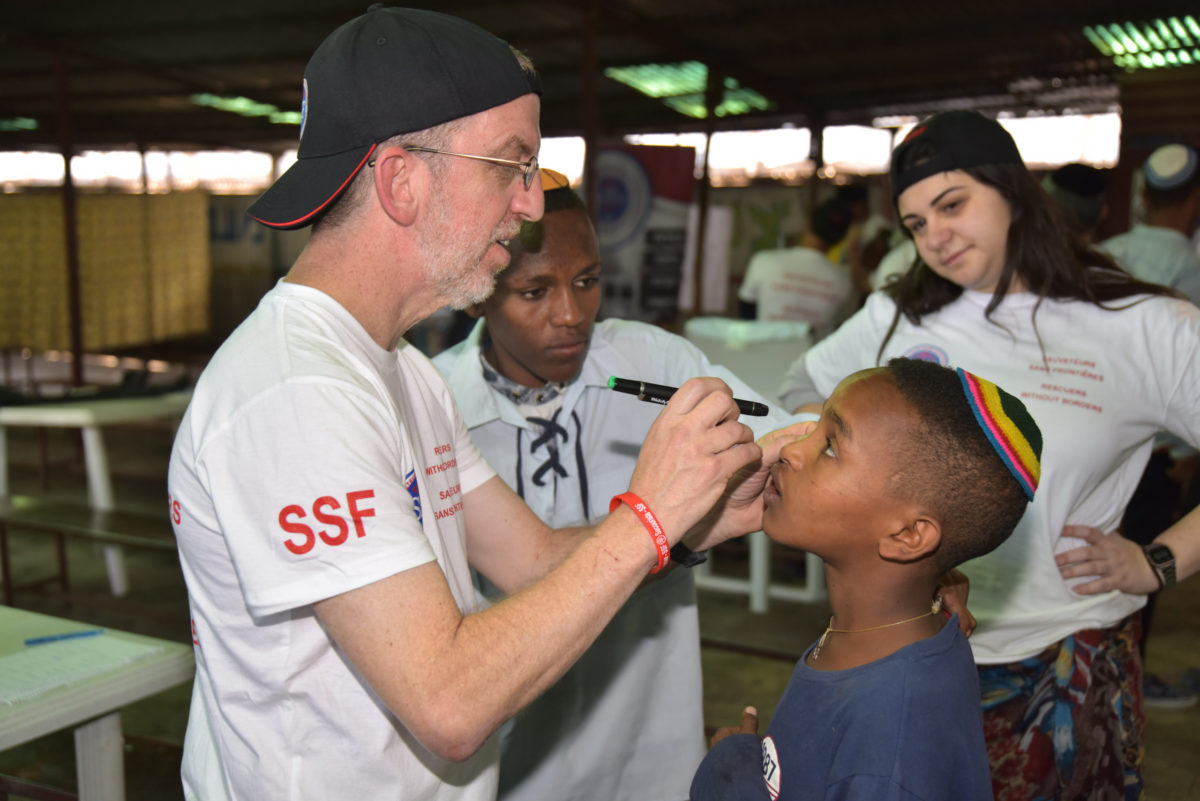 In 2014, Dr. Morris Hartstein and his family were trying to plan their summer vacation. They considered a few destinations in Europe, but one of their four children suggested something a little different. He wanted to take a family volunteer trip, where they could help make a difference.

The Hartsteins ended up in Ethiopia that summer, visiting the thousands of Jews living in an encampment in Gondar who have been waiting — sometimes for years — to make aliya.

“We brought all of these games and we told stories and I played guitar — we taught them some songs,” Hartstein recalled in a recent interview with Jewish Insider from his home in Ra’anana.

Hartstein is an eye surgeon and the director of ophthalmic plastic and reconstructive surgery at Assaf Harofeh Medical Center in Israel. He had considered utilizing his medical skills during that first volunteer trip, but decided it was too legally and technically complicated.

But one afternoon, word got out that he was an eye doctor, and he showed up to “hundreds of people sitting” and waiting to see him outside a community center. He had no equipment with him except a penlight, but he stayed late into the night examining patients and — with the help of a translator — instructing them to seek further medical help.

Harstein — a native of St. Louis who made aliya in 2004 with his wife, Elisa, and their family — never intended to return to Ethiopia. But he couldn’t stop thinking about the community and the considerable lack of medical care in the region. Many who thought they were blind just needed glasses, while others required a simple 10-minute cataract surgery, but had no real access to care.

“The following summer, we were thinking if we should go back,” he said. “It really touched us — the people and the poverty there and the desperation.” This time around, he solicited donations, sourced equipment and set out with tools, glasses and medications.

“We set up a clinic in the Jewish compound and examined a couple hundred people,” he said, enlisting all four of his children and his wife as assistants and providing the kind of basic care he hadn’t practiced much since medical school.

Fast-forward five years, and Hartstein has completed 10 total trips to Ethiopia, treating thousands of patients both in and outside of the Jewish community and securing his Ethiopian medical license. He has partnered with the nonprofit Struggle to Save Ethiopian Jewry, helped arrange meal programs for the Jews in Gondar, trained many community members in basic first aid, sponsored and coordinated hundreds of cataract surgeries and brought more than a dozen Ethiopian ophthalmology residents to train in Israel. He also performed some of the local hospital’s more complicated oculoplastic cases during his visits, and personally trained an Ethiopian doctor in his speciality.

But it took a steep learning curve and a lot of trial and error before Hartstein learned how to effectively help the community and understand its needs.

After their second trip, “we were kind of hooked at that point,” and the family headed back for a third visit armed with more glasses, eyedrops and other remedies. But Hartstein was disappointed to find that none of the patients he had referred to the hospital for cataract surgeries had followed up on his advice.

“They’re essentially internal refugees, they left their villages and came to Gondar and they don’t really have status there — and there’s antisemitism there,” he said. Many of the Jews in the encampment were intimidated by the hospital, or couldn’t afford the approximately 50-cent fee.

So on one trip, he personally drove a group of patients to the hospital, paid for the surgeries and made sure they followed through. “The ball really started rolling there,” he said. “It just kind of needed that jumpstart.”

He also began visiting a village outside Gondar called Azezo, whose residents — who are not Jewish — lived in abject poverty with even less access to medical care, to conduct basic eye checks and distribute glasses.

During his most recent trip in November, Hartstein partnered with the Switzerland-based Dear Foundation to oversee a mass cataract campaign in a town outside Gondar. He arranged a team of 20 people, took over part of a local hospital, and spent four days overseeing more than 200 cataract surgeries and a handful of other eye-related procedures.

Over his many visits, Hartstein has developed a close connection with and sympathy for the thousands of Ethiopian Jews in Gondar who have been waiting to move to Israel — many of whom have immediate family members who have already made aliya.

“It kills me that these people are just languishing there,” he said. “If you go there — they daven [pray] three times a day, they observe the holidays, they study, they sing ‘Hatikvah’ — they’re just dying to be here.”

Israel has brought close to 100,000 Jews from Ethiopia to Israel over several decades. The remaining community, estimated at around 10,000 people, has become a political football of sorts in Israel, often based around claims that they need to convert to Judaism or aren’t eligible for aliya. In 2015, a Knesset resolution was passed to bring the remaining community to Israel by the end of 2020, but its implementation has been repeatedly delayed and put on hold. Before Israel’s most recent election, Prime Minister Benjamin Netanyahu vowed to restart the aliya, and some immigration has resumed.

On Thursday, a flight of more than 100 Jews from Ethiopia landed in Israel, and several dozen olim arrived in late February, though other flights were halted because of the coronavirus outbreak.

“I truly feel that they should be here,” Hartstein said. “They could bring over everyone left in a week,” he added, but the government continues to “drag its feet, and do it very piecemeal.”

Hartstein had multiple trips scheduled for this year, but was forced to cancel them as he watched the spread of COVID-19. For now, he’s helping to oversee and coordinate the Gondar Jewish community’s response from his home in Ra’anana.

“I’m still trying to be active from afar,” he said. He made sure to close down the Gondar meals program and transition to takeout only, and dispatched a team he helped train in first aid to go door to door among the older population and teach them how to properly wash their hands.

While the number of coronavirus cases in Ethiopia remains relatively low, Hartstein is still deeply concerned, since the country lacks adequate testing, protective gear and equipment. “They may be late getting it, but if they get it they’re toast,” he said. “There’s maybe 100 ventilators in the country.”