Perez tells Jewish Dems they will ‘be proud of’ DNC platform 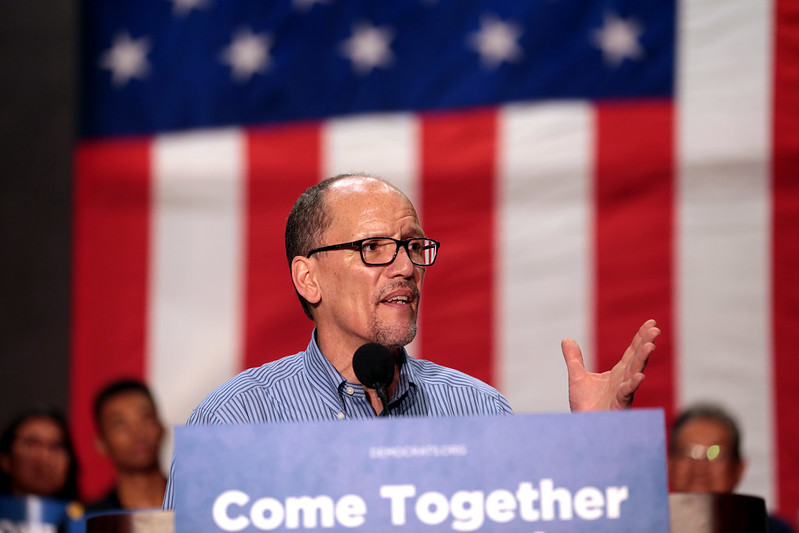 Chairman Tom Perez speaking with supporters at a "Come Together and Fight Back" rally with U.S. Senator Bernie Sanders hosted by the Democratic National Committee at the Mesa Amphitheater in Mesa, Arizona.

On a pre-Passover conference call, Democratic National Committee Chairman Tom Perez sought to reassure Jewish Democrats concerned over support for Israel within the party ahead of the summer’s convention and determination of the party platform.

Reassurance: “We want to make sure that our platform, which is our values statement of our party, is a platform that you can be proud of, a platform that, again, reaffirms our commitment to a two-state solution  — negotiated directly by the parties,” Perez said during the call with Jewish party members on Thursday. Perez added that Matt Nosanchuk, who was recently hired as the DNC’s director of Jewish outreach, will reach out to Jewish Democrats “in the weeks ahead” to get their input.

How it works: There are 187 members on the platform committee — 25 of whom have already been appointed by the DNC chair. The remaining members will be appointed in accordance with how many pledged delegates each candidate brings to the convention. If Sen. Bernie Sanders (I-VT) picks up a sizable number of delegates in the upcoming state contests, he would increase his chances to appoint more supporters to the remaining slots on the committee, opening the door for more progressive proposals to be debated, if not adopted, by the full committee.

Jewish vote: Perez said that he was “very heartened” by the results of a recent poll sponsored by the Jewish Electorate Institute, which showed that Jewish voters overwhelmingly identify with the Democratic Party.” “We understand that this president [Donald Trump] is trying to create wedge issues so that he can divide us, so he can win a few more voters in, especially, swing states,” he added. “We recognize that we have to continue to compete for every voter, and I am confident we can do this.”