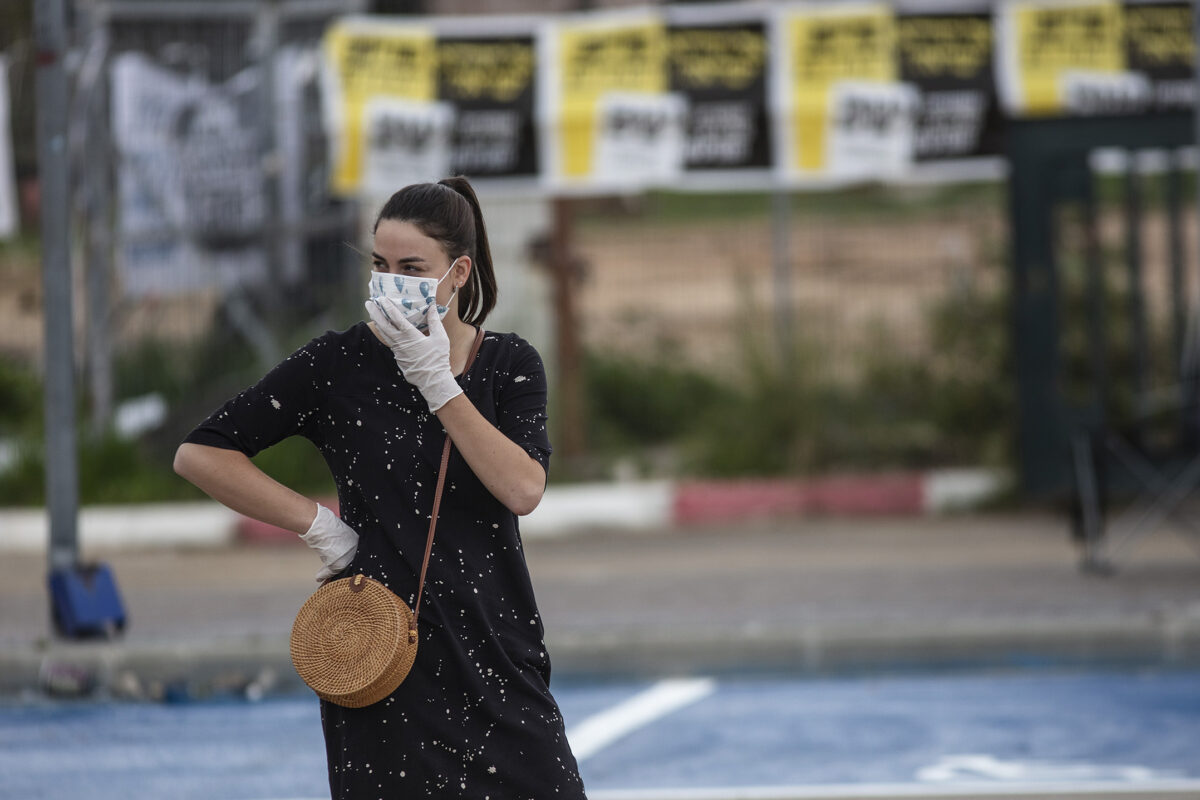 An Israeli woman under quarantine, after potential exposure to coronavirus, is seen at at a special polling station during the Israeli parliamentary election.

The ongoing spread of the coronavirus across the United States, Israel and Europe is leading to self-quarantine, event cancellations and widespread fear among the Jewish community.

Spreading quickly: A Jewish lawyer in Westchester unwittingly transmitted the disease to nine other friends and family members, bringing the total confirmed cases in New York State to 11. The man remains hospitalized, and his wife, two children and a neighbor have tested positive for coronavirus. A friend of the family has also tested positive, along with his wife and three children.

Shutdowns: The confirmed cases across Westchester led to the self-quarantine of more than 1,000 people, the suspension of activities at the Young Israel of New Rochelle, and the cancellation of classes at SAR Academy through next week and at Yeshiva University temporarily. A Jewish school in Baltimore sent home three students who may have had “indirect contact” with one of the patients. Nefesh B’Nefesh canceled an aliya fair slated for March 15 in New Jersey amid concerns.

No stigmas: Councilmember Mark Levine (D-Manhattan), former chair of the New York City Council Jewish Caucus, tells JI, “Once again Jewish New Yorkers are at the center of a public health crisis. And once again ignorance and prejudice are leading to scapegoating of the community. We need to do everything possible to ensure that coronavirus does not further exacerbate already surging antisemitism and that no group in this city is targeted as a result of this crisis.” Members of the community expressed concerns about being stigmatized due to the outbreak to LoHud.

Holy land: The Israeli Health Ministry is cracking down in an attempt to stop the spread of coronavirus, sending more than 50,000 people into mandatory home quarantine. With at least 15 confirmed cases in Israel, the Health Ministry has ordered anyone returning from France, Spain, Switzerland, Germany and Austria confined to home quarantine for 14 days. This is in an expansion of the restrictions already imposed on those coming from China, Singapore, Thailand, Japan, Hong Kong, Macau, South Korea, and Italy.

Big impact: El Al has laid off 1,000 employees and cut salaries of top management as it struggles with the fallout. Israeli Chief Rabbi David Lau advised Jews yesterday to forego the traditional touching and kissing of the “mezuzah” on doorposts to help prevent the disease’s spread. All IDF soldiers and all health workers in Israel are prohibited from leaving the country at all.

Cancellations: The ministry’s orders also banned any gatherings of more than 5,000 people, and any international conferences, leading to widespread cancellations of concerts, Purim parties, sports games and conferences across Israel. The Jerusalem Marathon, scheduled for March 20, has been postponed, the mayor said Thursday. Most sports games in Israel are now playing to empty stadiums.

Eyeing the U.S.: While there are currently no specific restrictions on travelers from the United States, the ministry said that anyone who attends a conference overseas must also observe a 14-day quarantine. The policy applies to all those returning from March 4 and forward, which could potentially include those at the recent AIPAC policy conference in Washington. AIPAC sent a warning to those at its conference earlier this week that a group of attendees were “potentially in contact” with an individual with confirmed coronavirus, though no attendees have tested positive so far.

NY-Jerusalem: One of the people in Westchester who tested positive for coronavirus visited Israel between the dates February 22-28. The Israeli Health Ministry released a detailed list of the woman’s activities in Jerusalem, including visits to shops, restaurants and travel on public transportation. The ministry ordered that anyone who was on the same El Al flights or visited locations at the same time as the tourist must enter quarantine for 14 days.

Across the pond: A Jewish dentist in London tested positive for the virus yesterday and has been in self-isolation since he returned from a trip to Switzerland via Milan last week.