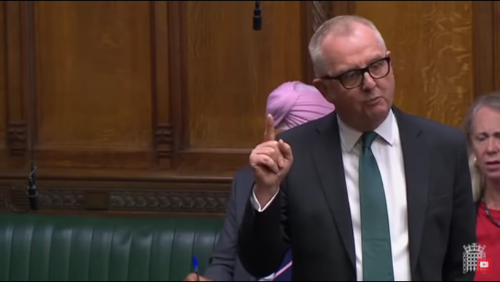 Former British MP Ian Austin, who resigned from the Labour Party last year to protest Jeremy Corbyn’s extremist views and handling of antisemitism, will speak on stage during the Sunday afternoon plenary session.

Message to American Jews: In an interview with Jewish Insider’s Jacob Kornbluh on Friday, Austin said that it is an “honor and a privilege” for him to “be able to bring the story of what happened in the U.K.” to such an important gathering. “I will be talking about the campaign we mounted to prevent Jeremy Corbyn from becoming the prime minister,” he said. “I will be talking about how people from different political backgrounds came together to challenge extremism and to stand up to decent mainstream political values, and to stand up for the Jewish community and oppose antisemitism.”

Red light warning: Austin said that while he is not in a position to tell Americans what to do in their elections, “the one thing I would say is that what happened in the U.K. shows how quickly extremism could move from the fringes to the center of a political party. It shows how quickly a mainstream political party can be taken over by outside the party or from its extreme fringes, and it shows how people have got to be vigilant and have really got to be careful about safeguarding their political institutions. The second thing I think it shows is that it’s not good enough to say that someone is not electable, but say why they shouldn’t be elected.”

It could happen anywhere: “If you go back six years, who would have thought that an institution so robust as the Labour Party and as central to Britain’s democracy could have been so vulnerable to extremism, and in the end, antisemitism. That would have been unthinkable. And I think what happened in the U.K. shows you have got to be really vigilant in how to protect your institutions.”

How he did it in Britain: The key campaign against Corbyn in the recent U.K. elections, Austin said, was explaining “what the impact of his policies were, how extremism and antisemitism had poisoned the Labour Party under his leadership. And I think the great thing about our country is that the British people, many of whom have not met any Jewish people, that even though they didn’t know the details or the history of antisemitism, they knew that it was bad and they were disgusted by it. It was a major factor that people who voted Labour their entire life decided they couldn’t support Corbyn in this election.”