“I was the squad before ‘The Squad’ — Meet Jill Carter, running for Congress 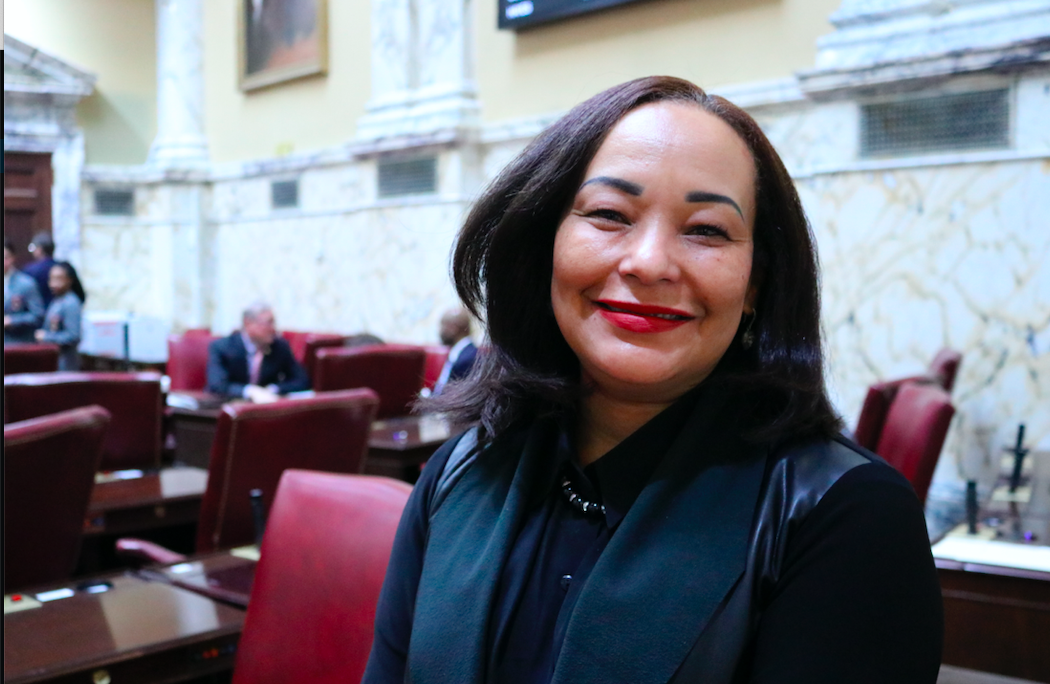 In this Jan. 24, 2020 photo, Maryland State Senator Jill Carter, of Baltimore, stands in the Maryland Senate in Annapolis, Md. Carter is one of 24 candidates running in a special Democratic primary to run for a congressional seat that became vacant with the death of Elijah Cummings in October. (AP Photo/Brian Witte)

Dubbed “The People’s Champion,” by the late Congressman Elijah Cummings, it’s only fitting that State Senator Jill P. Carter spends the last 72 hours of the 7th district congressional primary race canvassing the neighborhoods. Driving around her district, blasting John Lennon’s “Power to the People” from her campaign van and calling out “give the power back to the people,” Carter’s boots-on-the-ground style is reminiscent of a 1970’s-style political movement.

“Today has been one of the best days of my campaign,” says Carter as we sit in her Hampden Campaign headquarters on the last Saturday before voters in the district head to the polls. “Caravaning through the streets, lifting people up and urging them to vote reminded me of my childhood, campaigning with my whole family for the late Congressman Parren J. Mitchell. He was a strong congressman who gave people hope.”

Congressman Mitchell, the first African American elected to Congress in Maryland and a friend of Carter’s family, was the first person she thought of when she began to consider running for his vacant seat.

“Like Congressman Mitchell, I believe politicians need to meet people where they are,” said the 55-year-old Carter. “We won’t fix anything if we are disconnected. Congressman Cummings saw me as the people’s champion because he saw my commitment to championing the causes of people that need champions. I put people over politics and I’ve often taken on issues that are to my own political detriment.”

At times a contentious figure in the Maryland House of Delegates and Maryland State Senate, Carter has a reputation for going against Democratic establishment.

“On a local level, I was ‘The Squad’ before ‘The Squad,’” said Carter, describing the group of progressive congresswomen that includes Reps. Alexandria Ocasio-Cortez (D-NY), Ilhan Omar (D-MN), Ayanna Pressley (D-MA) and Rashida Tlaib (D-MI). “It’s that idea of having an independent voice, protesting and using tactics that are shunned by the political establishment. I believe in their tactics of coloring outside the lines, doing what you have the ability to do with the bandwidth you have. I think we have to use any means necessary to get our points across. I don’t know if I agree with every single thing The Squad does, but I do believe in the idea of an independent spirit and pushing against established Democrats.”

As a delegate for Bernie Sanders in 2016 and one of the most progressive candidates in the primary race, Carter supports much of The Squad’s progressive agenda, including the New Green Deal and Medicare for All.

“355,000 Marylanders are underinsured or not insured at all,” says Carter. “We have to do something about that. We also have to move from dirty to clean energy if we want to survive. There isn’t one issue that is more important. The most important piece is that the seventh district has faith and trust that the person they elect is a voice for them.”

Carter breaks from Omar and Tlaib when it comes to the issue of BDS, though she opposes recent efforts in Washington and in state houses to pass anti-BDS legislation. “I don’t support BDS but I do believe Americans should be able to decide what they want and don’t want to purchase.”

Carter heaped praise on the Elijah Cummings Youth Program in Israel, a leadership program for high schoolers in the district that includes a trip to Israel. She hasn’t yet been to Israel, but only because she hasn’t been invited.

“I believe in peace and not war,” says Carter when asked what peace in the Middle East looks like in her mind. “The United States should make better efforts to bring about some type of solution that works for Israel and Palestine and for Iran and Iraq. As a congressperson, I envision I would vote in a matter that would allow Congress to have more power over what the executive does when it comes to acts that can be construed as triggers for war. I know when we are at war and conflict, there are resources being expended on that. Those resources need to be put back into our communities and that is my priority. But to be honest, I don’t think we are going to make any progress domestically or abroad under President Trump.”

Born and raised in the seventh district, Carter knows first-hand the challenges of the area. Home to some of Baltimore’s richest and poorest communities, as well as large African American communities and Jewish communities, Carter understands there are “a lot of issues in the district that no one wants to address.”

She hopes to change that.

“I’ve always felt very strongly about bringing Blacks and Jews together,” says Carter. “I believe we need to do a better job teaching our children about everyone’s history. It’s critical for us to have better education about the Holocaust and slavery because I think if we could better understand each-others struggles there wouldn’t be so much resentment.”

“Antisemitism and racism are issues that strongly impact this district and voting for anti-hate crime legislation is something I can do to combat that on the state level where I’m at now.”

Carter is no stranger to speaking out for those who are “intentionally ignored.” The daughter of civil rights activist Walter P. Carter, Carter grew up on the front lines of the fight for equality. Carter was seven years old when her father died of a sudden heart attack, but his cause for justice lives on in her.

“Growing up, when my dad wasn’t home my mom’s explanation was he was fighting for equality,” Carter recalls. “When he died, I asked my mom who was going to fight for us now. I didn’t know then how poignant and profound that question was, because I have found the civil rights movement has died. There has been no transition into any next steps of economic power. Baltimore remains in a state of complete inequity and poor black neighborhoods have not evolved.”

The desire to carry on her father’s legacy was one of the reasons Carter chose to run for the Maryland House of Delegates in 2002, an election she won. A lawyer by trade, Carter served as a delegate for the 41st district for 16 years before stepping away from politics to serve as the director of the Baltimore City Office of Civil Rights and Wage Enforcement. In 2018, Carter resigned from that post to become a state senator.

This year, Carter introduced Senate Bill 619, which prohibits University of Maryland Medical System board members from having lucrative business deals with the institution. The bill resulted in criminal charges against former Baltimore City Mayor Catherine Pugh as well as the resignation of UMMS board members.

“The effects of the UMMS bill were far greater than I had anticipated,” Carter explains. “When I put in that bill, I had no idea it was going to have the results it did. It was one of many bills I submitted and didn’t have more or less meaning to me than any of the others. I’ve never done something that I don’t believe is right because of repercussions. If I believe it’s right, I can justify it.”

Carter is perceived as an underdog in a crowded race that includes former Congressman Kweisi Mfume and Cumming’s widow Maya Rockeymoore Cummings, both considered frontrunners. But Carter, who believes the media decides on frontrunners based on national name recognition and fundraising abilities, doesn’t concern herself with labels, noting she won her race for State Senate last year with less money than her opponent.

With endorsements from the Baltimore Sun Editorial board, former gubernatorial candidate Ben Jealous and a number of state delegates, Carter is confident her next stop is the United States Congress. The winner of Tuesday’s primary is the likely winner in April’s general election, which will also serve as the primary for November’s general election. Should Carter fall short in her special election bid, she plans to be on the ballot in April.

“I think everyone in this race who comes close will run again in April,” says Carter. “But I do believe there is a real desire to have a woman in this position. So if a man wins the special election and a woman comes in second, I think she has a real chance to capture support and win in April. In my mind, if I come in second, I will run again. I want to use what time I have left in political life to make the government work for the people.”