92,000 Jews to gather at MetLife Stadium on New Year’s Day 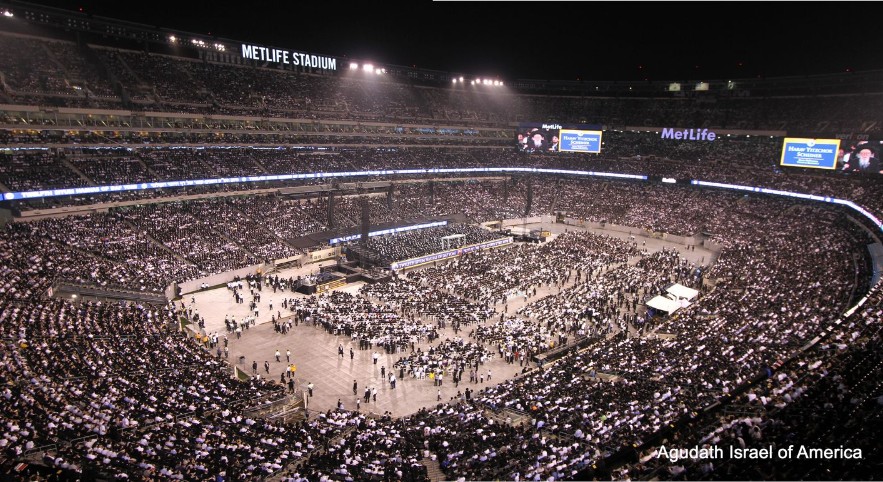 On January 1, 2020, approximately 92,000 people are set to gather at MetLife Stadium in New Jersey to celebrate the 13th completion of the Daf Yomi program (Siyum HaShas), a seven-and-a-half-year cycle of studying the Talmud.

Uniting Jews: The event, organized by Agudath Israel of America, is considered to be the largest gathering of American Jews in a single venue in the history of the United States. Featuring speeches from leading rabbis of the Orthodox Jewish community, the gathering will be broadcast around the world.

Safety first: Rabbi Yosef Chaim Golding, the Siyum’s chief operating officer, tells JI that the recent Jersey City attack has had no impact on the already high-level security measures in place. Over the past few months, Golding has been working closely with more than 50 law enforcement agencies including the New Jersey State Police, New Jersey Department of Homeland Security, New York City Police Department and the FBI to ensure that the stadium is “the safest place to be in New Jersey on January 1st,” according to Golding.

Yossi Gleiberman, a lecturer and the composer of the “Songs of Shas” musical video series, spoke with Jewish Insider about the nature of the celebration, the discipline needed to be part of the Daf Yomi daily study, and how it connects people of all backgrounds and at every stage of life.

Background: “The Talmud is a 20-volume set of 37 different tractates that make up all aspects of Jewish life and Jewish law,” Gleiberman said. “In total we have over 2,700 pages of content. In the 1930s, it was Rabbi Meir Shapiro’s idea to start a program where people would be studying the same page on a daily basis — approximately between 40 minutes and an hour a day — throughout the whole world — so that if a person in New York travels to London or somebody from London travels to Japan, he’d meet the fellow participant of the Daf Yomi cycle and they can study together and share their thoughts. And today… we are able to share with people from around the world or other study groups daily lectures and commentaries via social media.”

The book of ethics: According to Gleiberman, Talmud studies are not necessarily focused on a person’s relationship with God, but largely focused on ethics — business ethics, ethical manners at home, and the way people should treat each other. At his two daily lectures, Glieberman said, fellow attendees are mostly “practicing good-standing members of the community — it can be from a lawyer to a doctor or people involved in retail or any other kind of labor — and they’re able to juggle and balance a life of studying along with the life of having a family and enjoying and taking advantage of all the great things that the world has.”

Celebrating a journey: Unlike wedding celebrations or graduations, where one celebrates reaching a milestone or accomplishment and then moves on in life, the Siyum, Glieberman explains, is “celebrating the journey. The destination came about as we went through the journey for the last seven-and-a-half years, and the journey starts again the next day. The gathering itself is not necessarily where people are going to go partying and drinking, but an opportunity to reconnect, to get re-energized and to celebrate our commitment.”