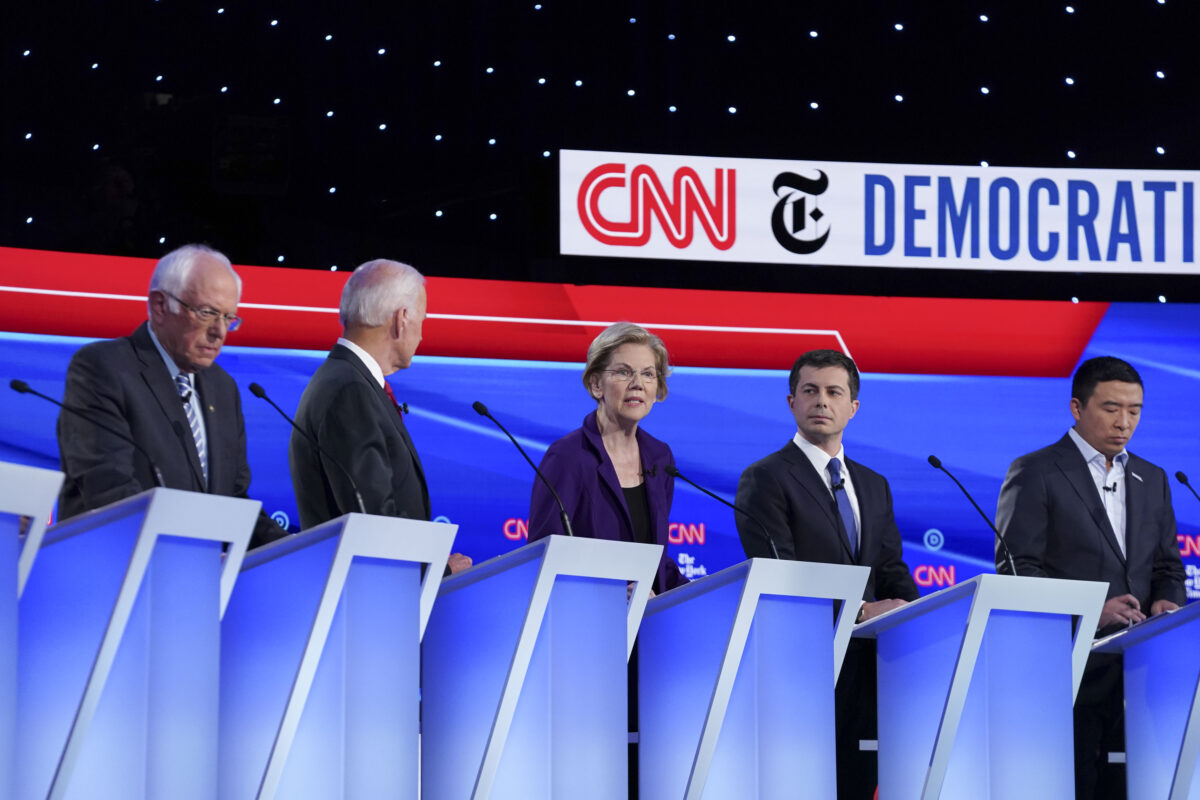 Westerville, Ohio — In a heated debate Tuesday night, Senator Elizabeth Warren (D-MA) bore the brunt of the attacks from rival candidates after taking the lead in national and early state polls.

Buttigieg, who launched a web ad attacking Warren for her support for Medicare for All before Tuesday’s debate, tried to portray her as a classic Washington politician reluctant to acknowledge the tax increases that would come as part of the plan. Warren has emphasized that costs will go down “for hardworking middle-class families” as part of legislation intended to provide free health care coverage to every American.

Senator Bernie Sanders (I-VT), who has long boasted of “writing the damn [Medicare for All] bill,” acknowledged that taxes would go up, but “for virtually everybody, the tax increase they pay will be substantially less — substantially less than what they were paying for premiums and out-of-pocket expansions.” Klobuchar praised Sanders “for being honest” and then accused Warren of not telling Americans “where we’re going to send the invoice.” Klobuchar defended her comments after the debate, telling reporters, “I wasn’t sharply attacking anyone, I was making my case about why I’m the best candidate.”

Although in past debates, Warren had been attacked by centrist candidates for her support for Medicare for All, that criticism came from long-shot candidates like former Congressman John Delaney (D-MD) and former Governor John Hickenlooper (D-CO). The Massachusetts Democrat emphasized her health care policy as a moral position and said that “the issue is whether the Democratic Party has the guts to stand up to the health care industry.”

Warren faced attacks from rivals on a variety of other topics: Businessman Andrew Yang criticized her support of a wealth tax, Congresswoman Tulsi Gabbard (D-HI) attempted to pin her down on foreign policy and Senator Kamala Harris (D-CA) went after her for refusing to call on Twitter to delete President Donald Trump’s account.

Warren also had a tense exchange with former Vice President Joe Biden. After Warren touted her efforts to create the Consumer Finance Protection Bureau (CFPB) during the Obama administration, Biden noted his own efforts at the time, telling her, “I went to the floor and I got you the votes.” In response, Warren pointedly thanked Barack Obama for his efforts.

The debate also featured the first extended discussion of foreign policy in the six presidential debates of the 2020 cycle, and came days after Trump announced the withdrawal of U.S. troops from Syria as the Turkish military launched an invasion of the country.

Gabbard, who has defended the regime of Bashar al-Assad, served as a foil for the other candidates on stage, criticizing “regime-change wars” and attacking “the mainstream media” and politicians from both parties for having, along with Trump, the “blood of Kurds” on their hands. Gabbard’s comments prompted a fierce rebuke from Buttigieg about the president’s decision to withdraw U.S. forces. “Part of what makes it possible for the United States to get people to put their lives on the line to back us up is the idea that we will back them up, too,” said the South Bend mayor, who served a tour in Afghanistan as a Navy reservist. “This president has betrayed American values. Our credibility has been tattered.”

Elizabeth Warren argued, “I think that we ought to get out of the Middle East.  I don’t think we should have troops in the Middle East but we have to do it the right way, the smart way.” Warren’s comments were strongly criticized by fellow senator Chris Coons (D-DE) after the debate. Coons, a Biden supporter, told reporters that Warren’s statement “showed a striking degree of naïveté or ill preparedness.”

Former Texas congressman Beto O’Rourke clashed with the other candidates over his support for mandatory buybacks of assault weapons. O’Rourke, whose hometown of El Paso, Texas, was the site of a mass shooting in August, insisted that if assault weapons “are too dangerous to sell, they are also too dangerous to own.” He sparred with Buttigieg, who said that the Texas Democrat was focused on “purity tests,” arguing that O’Rourke had no clear plan for how he would take assault weapons away from their owners. O’Rourke also faced criticism from former HUD Secretary Julian Castro. “I am not going to give these police officers another reason to go door to door in certain communities, because police violence is also gun violence, and we need to address that,” Castro said.

Democrats did find common ground in the first debate since the beginning of the impeachment inquiry against Trump. On stage Tuesday night, there was unanimous support for the impeachment inquiry centered around Trump’s effort to pressure the Ukrainian government to investigate Biden’s son Hunter Biden. Only hours after the former vice president’s son admitted to bad judgment in an interview with ABC News, his father insisted on the debate stage “my son did nothing wrong. I did nothing wrong.”