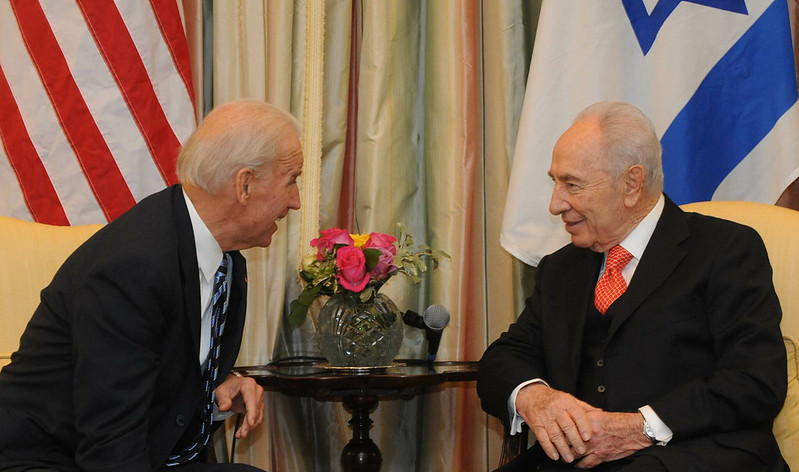 Former Vice President Joe Biden said on Thursday it would be “absolutely outrageous” for the United States to condition aid to Israel. He described the proposal, suggested by several Democratic presidential candidates, as “a gigantic mistake” after a campaign event in Fort Dodge, Iowa.

Biden’s remarks came days after the annual J Street National Conference earlier this week, where a number of Democratic candidates said they were open to attaching conditions to U.S. aid to Israel, specifically if the Jewish state were to annex parts of the West Bank. Israeli Prime Minister Benjamin Netanyahu had pledged annexation prior to the September election.

In a video submitted to the J Street conference, Sen. Elizabeth Warren (D-MA) said, “aid should not be used to support annexation,” a sentiment echoed by South Bend Mayor Pete Buttigieg, who said in an interview at the event that the United States should “have mechanisms to do this to make sure U.S. taxpayer support for Israel doesn’t turn into U.S. taxpayer support for a move like annexation.” Vermont Sen. Bernie Sanders (I-VT) went further, saying that Israel needed to “fundamentally change” its relationship with Gaza, which is currently controlled by Hamas, in order to receive aid.

Biden had told the Wall Street Journal that he hoped rival candidates who supported leveraging aid to Israel “had misspoke or had been taken out of context.” The former vice president had submitted a video to J Street in which he criticized settlement activity, which he said “takes us further from peace.”

The former vice president is a longtime supporter of the U.S. alliance with Israel. In 2008, he told the National Jewish Democratic Council, “My support for Israel begins in my stomach, goes to my heart and ends up in my head.” He has also been a longtime critic of Israel’s expansion of settlement activity in the West Bank. In a speech at AIPAC Policy Conference in 2016, he said, “Israel’s government’s steady and systematic process of expanding settlements, legalizing outposts, seizing land, is eroding in my view the prospect of a two-state solution.”