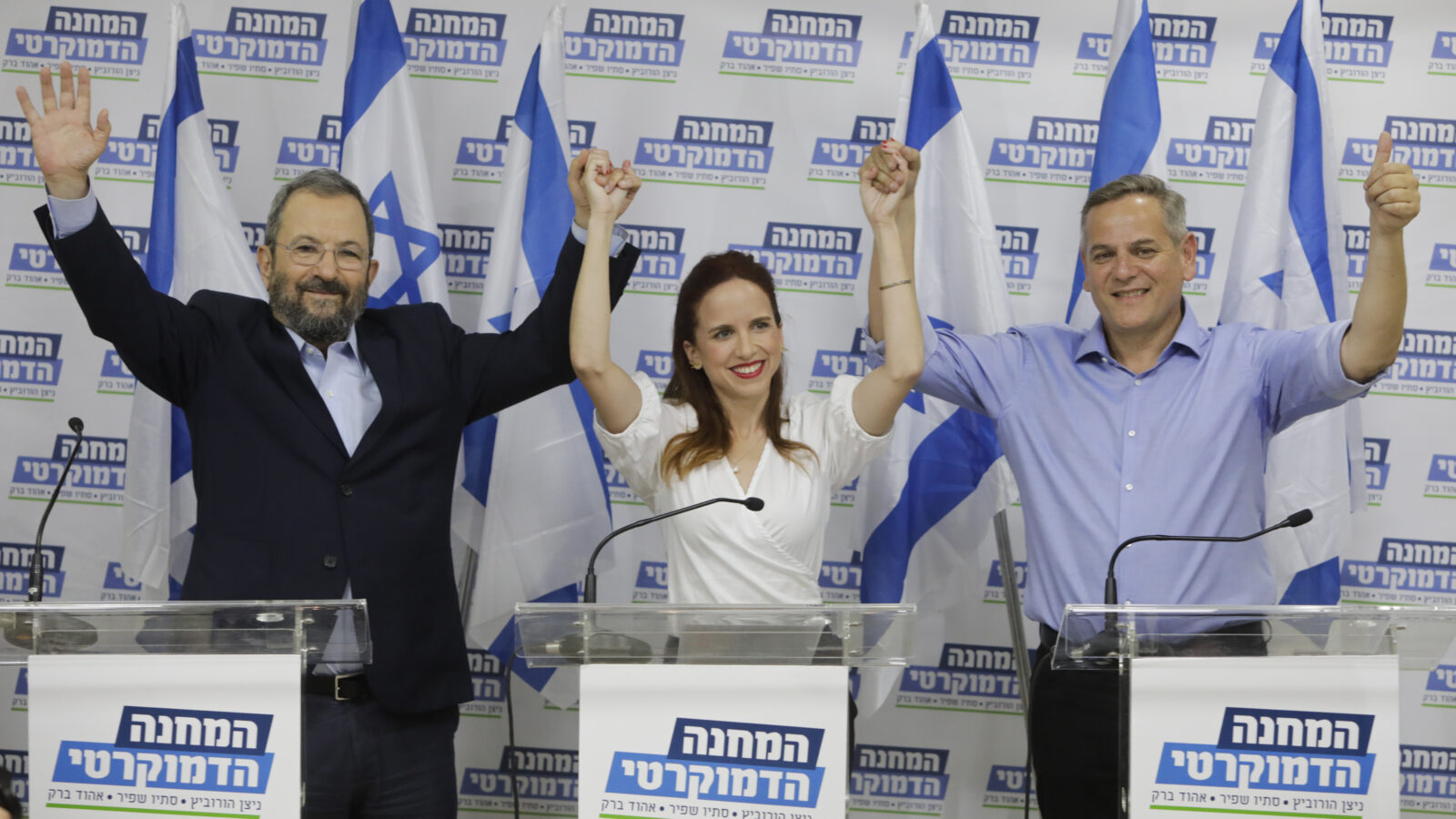 Stav Shaffir on the upcoming Israeli election, BDS on college campuses and why Netanyahu has damaged the U.S.-Israel relationship.

Israelis have a choice in this week’s election between an anarchist, halachic state and a liberal democracy, argues left-wing Israeli lawmaker Stav Shaffir.

“I think today, the differences between the democratic Israel and those on the right is very clear,” Shaffir told Jewish Insider during an interview last week at a cafe in south Tel Aviv. “On the right, what they want is an anarchist revolution, a libertarian halacha state and annexation of the West Bank.”

Those on the left, she continued, “understand that we need to have a border between us and the Palestinians, we need a two-state solution to keep Israel Jewish and democratic — to all of its citizens, Jews and Arabs — and we need to stop the Orthodox monopoly on every bit of our religion.”

Shaffir, 34, is one of the more recognizable figures on the Israeli left, and it’s not just because of her fire-red hair. She first rose to public fame as one of the leaders of the 2011 social justice protests, which oversaw tent cities popping up across Israel to protest high housing costs.

In 2013, at age 27, she was elected to the Labor Party, becoming the youngest female member of Knesset in history. After the April elections, Shaffir competed in the Labor leadership primary, and lost to former Defense Minister Amir Peretz. Several weeks after that vote, Shaffir left Labor and resigned as an MK to join with Meretz and former Prime Minister Ehud Barak to form the Democratic Union, taking the party’s number two spot.

She is hopeful that one union can lead to another, and — eventually — all the left-wing parties in Israel can join together.

“The difference of opinions between us is very narrow and if we join together, we can win every time,” she said. Shaffir said she believes Blue and White leader Benny Gantz’s “opinions are like my opinions… but his party is not showing today enough courage. And that’s why the Democratic Union has to be strong… Most politicians are afraid to say much about anything. Those who become powerful and effective are those who say their opinions and are able to fight for them. That’s the Democratic Union.”

One distinguishing feature of the Democratic Union platform is its approach to matters of religion and state. The party has proposed that such issues — including public transportation on Shabbat, civil marriage and burial rights — be transferred from the Chief Rabbinate to local authorities.

A FEW WEEKS ago Shaffir released a video in English targeting “my fellow Democrats,” slamming the BDS movement and pointing out that “not all Israelis are Netanyahu.” She scoffs at the suggestion that the relationship between Israel and the United States is at a peak right now due to the close ties between President Donald Trump and Prime Minister Benjamin Netanyahu.

“How about the young generation in the United States? Do they think the same about that?” Shaffir asked. Instead of bringing the countries together, she said, Netanyahu has “made Israel a partisan issue in the United States… he failed to create that sense of brotherhood with our brothers and sisters in the United States. Especially when it comes to our generation, where the distance with Israel is the biggest it’s ever been.”

The former Labor lawmaker says she has visited college campuses at the invitation of the Israeli Foreign Ministry in order to fight BDS, and what she discovered has her concerned.

“Every time, I hear the same things in colleges — they think that all of Israelis are like Netanyahu, they think that Israelis are racist,” she said. “But when young Jewish Americans get the real picture of what Israel is, then they understand the complexity that we have here in the political discourse.”

While Shaffir doesn’t think BDS is a particularly successful movement overall, “it has been fairly effective among young people,” she said. “Those who are now in college, in 10 years will be in Congress. And we need them to understand Israel and the complexity of it.”

Netanyahu’s decade in office, Shaffir argued, has only made the relationship between Israel and the United States worse.

“An Israeli prime minister needs to have a good relationship with every American president,” Shaffir said. But Netanyahu has burned bridges with the Democratic Party, she argued, first when he circumvented President Barack Obama in 2015 and addressed lawmakers during a joint session of Congress, and again earlier this year when he barred Reps. Ilhan Omar (D-MN) and Rashida Tlaib (D-MI) from entering Israel, which Shaffir called a “stupid move.”

“I completely disagree with what [those congresswomen] say, but every congressman and woman should be invited to Israel regardless of their opinions,” Shaffir said. “It’s better to have them come and visit, and meet Israelis, to see how things are here. To see that Israel is not exactly the way that the BDS people describe it to them.”

Shaffir said that if the two women could better understand the complexities of Israel “that would be great. If not, that’s also okay. We’re strong enough to get some criticism.”

AND SHE BELIEVES the benefits Israel has received from the Trump administration are not worth the politicization of the relationship.

“With all due respect to transferring the embassy to Jerusalem,” said Shaffir, “which is very important for all of us, it’s much more effective and important for Israel to have sanctions on Iran and to make sure that Iran doesn’t have a nuclear bomb.”

Shaffir said she is “trying to do everything in my power to build connections with the Democrats as well.” She believes the creation of the Democratic Union — which she thinks mirrors the U.S. Democratic Party — can help strengthen that bond.

“I think that we have a lot in common,” she said. “I think that we and Democrats all around the world are now facing a threat to democracy. And that threat comes from the populist front on the right, which uses racism, incitement and fear as their main political tools.”

Shaffir says the Democratic Union will “do everything to keep Israel a bipartisan issue in the States. We should also unite democrats from all around the world — and definitely our partners in Congress — and unite them around encouraging greater and stronger democracy everywhere.”

While pre-election mergers like the Democratic Union have a history of breaking up after a vote, Shaffir is hopeful that the three factions can stick together post-election.

“That’s what I want,” she said. “We’re three parties, and I’m hoping we can become one big party. I hope that in the next election there will be no small parties fighting each other, but one big Democratic party.”

THE ADDITION OF Barak to the left-wing union has proven somewhat controversial; the former prime minister comes with a lot of baggage, including the shortest premiership in Israeli history and a record that leaves most Israeli Arabs staying far away. Ali Salahla, a Druze candidate for Meretz, dropped out after the merger with Barak, saying Arabs would not vote for the former prime minister. Joint List chairman Ayman Odeh said Barak should quit the race over his past rhetoric and the role he played in the deaths of 13 Arab protesters at the outbreak of the second intifada in 2000 — something Barak apologized for only this year. More recently, he’s come under fire for his ties to the financier and accused sex trafficker Jeffrey Epstein, a subject Barak has been loath to discuss.

Could Barak — even in an unrealistic 10th slot on the combined list — be more of a liability for the party than an asset?

“Part of our pride on the left is that we always have reservations about every leader that we have,” Shaffir answers after a long pause. “That’s part of how we define ourselves. I think Barak did make mistakes in the past.” But at the same time, she said, “he has the biggest knowledge of security here. And also the biggest knowledge of how Netanyahu works. And that’s why Netanyahu is so afraid of him.”

While Shaffir compares the Democrat Union to the U.S. Democratic Party, others have been comparing her to another young, ambitious, liberal and outspoken female lawmaker: Rep. Alexandria Ocasio-Cortez (D-NY).

“I see everything that she’s doing because people send it to me and say ‘look what your sister is doing,’” joked Shaffir. “I think she’s doing really important work, and I think the young generation of Democrats [around the world] should work together on many issues.” Shaffir said while she’s heard Ocasio-Cortez speak about Israel, “I would like her to visit Israel and see what Israel really is — not just through the lens of those over there who try to portray Israel in a certain way.”

What she does see in common, Shaffir said, is their attempts to “take issues that are not discussed so much, and put them at the front and fight for them.” She referenced her own time on the Knesset Finance Committee, where it took her months to learn the ropes and dig for information. Eventually, “I discovered what a chain of corruption it was,” and how little the established politicians on the committee were interested in changing the system.

Just like Ocasio-Cortez, Shaffir said, “I was not part of the old political club” — and on that “we have a lot of grounds for understanding.”