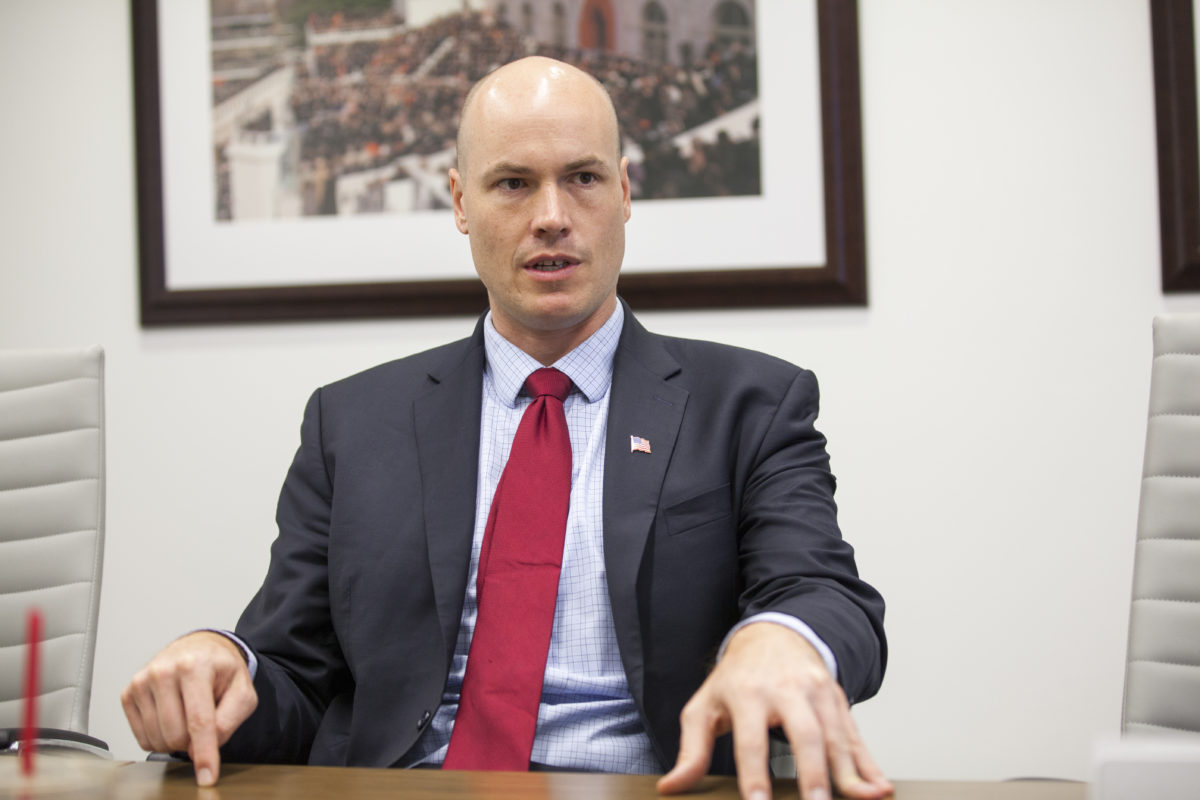 Despite the deep red hue of the rural district, Scholten almost pulled off an upset last year as a result of King’s history of racially charged comments and support for white supremacists. National Republicans withdrew support from King only days before the midterms as a result. Despite the fact that President Donald Trump won the district by 25% in 2016, King only narrowly pulled off a 50%-47% victory two years later.

This time around, Scholten is running against a weakened incumbent. King was stripped of his committee assignments in January after musing to The New York Times: “white nationalist, white supremacist, Western civilization — how did that language become offensive?”

In an interview with Jewish Insider, Scholten — who formally entered the race earlier this week — said he had “unfinished business” after his last campaign.

“When you come as close as we did in a district a lot of people [have] written off for a long time,” Scholten said he felt the need to return to the race. He insisted that “the level of excitement we’ve seen in the past couple of days shows that there is a passion now in the campaign that is far more than about me or King — but about a movement in the district. People want to start doorknocking today.”

Scholten, running in a rural district, told JI that when it comes to foreign policy, “I think of agriculture and trade” first. In a broader sense, Scholten said that “I think there’s not an easy solution to a lot of these complicated international solutions for me right now.” But he criticized “a president who is a tweet away from escalating any uncertainty all over the world.”

The Iowa Democrat said that he fully stands “for a two-state solution when it comes to Israel and was endorsed last time by J Street.” Scholten initially told JI that he did not know how he would have voted on the anti-BDS resolution that passed in the House earlier this month by a margin of 398-17: ”I didn’t read the bill to be perfectly honest, so I’m not comfortable answering that and I read more about farms and [agricultural] stuff.”

His campaign later provided a statement to JI, noting that Scholten is “not opposed to boycott, divestment, or sanctions initiatives that explicitly support a two-state solution, recognizing both Israel’s and Palestine’s right to exist and live in peace. Additionally, I don’t believe it’s the government’s place to dictate the right of people to free speech or protest. It’s protected under the First Amendment, and that has to be protected by our elected officials.”

Come November 2020, Scholten may not ultimately be facing King in the general election. Republican State Senator Randy Feenstra launched a primary campaign in January after King was stripped of his committee assignments. An ardent social conservative and opponent of gay marriage, Feenstra said he was running because of “the need to provide President Trump with a strong voice who can help protect and advance a conservative agenda for America.”

Feenstra has posted strong fundraising and garnered support both from Iowa VIPs like former Governor Terry Branstad and those with national profiles like conservative pundit Ben Shapiro. In contrast, King’s fundraising has been anemic.

Scholten noted that “this is a very unique situation where [the] incumbent has a primary challenge and the challenger doesn’t — and also the incumbent has $18,000 cash on hand. There’s not a playbook for this.”

However, the former minor league pitcher told Jewish Insider: “I’m going at this the same way as when I was [playing baseball]. I was going to pitch to my strengths and follow my strategy.” Scholten noted that his opponent is not the focus of his campaign: “I did town halls in all 39 counties and rarely did I even talk about King.”

But Scholten did say that racial comments made by both King and Trump have influenced events like the recent mass shooting in El Paso, Texas.

“Ultimately, words have consequences,” he said. “What we’re seeing is the hatred and the racism that has become too commonplace in our country.”

Scholten said Congress should take steps towards passing gun control measures. “What we need to do is come together and urgently take action to keep our people and our children safe. It’s deeply hypocritical to pray for a problem that you’re unwilling to step up and resolve.”