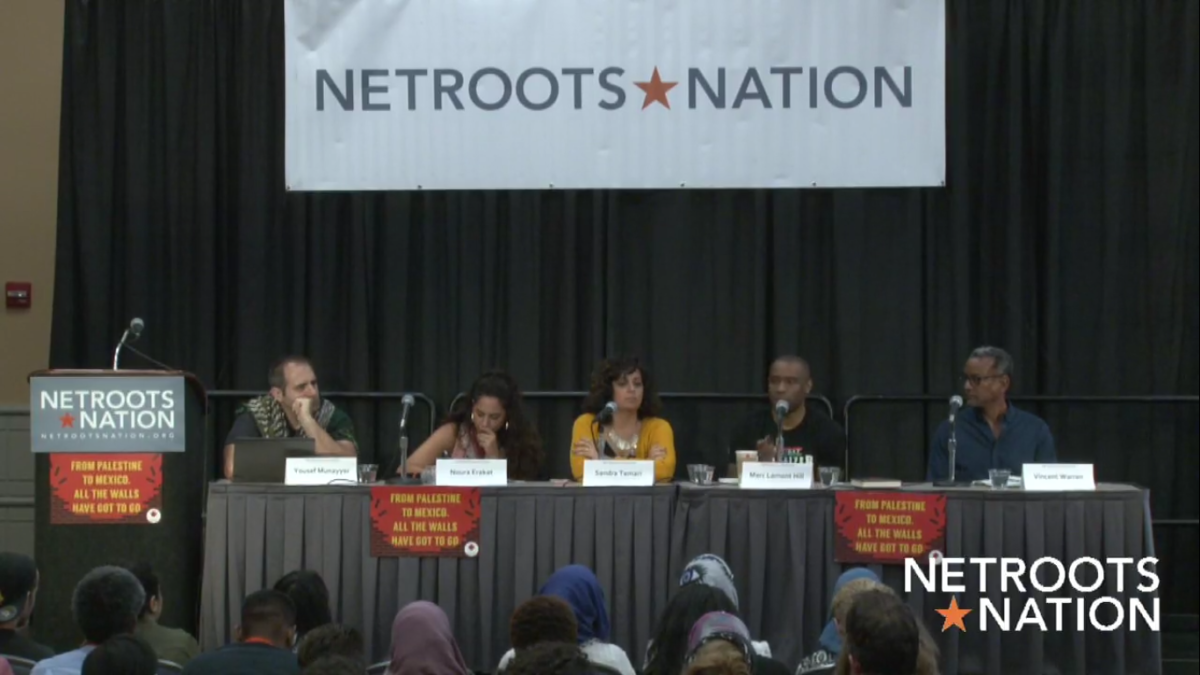 A panel on “embedding Palestinian rights in the 2020 agenda" at the Netroots Nation summit.

PHILADELPHIA — Former CNN commentator Marc Lamont Hill claimed that news outlets like NBC and ABC were “Zionist organizations” that produced “Zionist content,” during a panel on Friday at the annual Netroots Nation summit held by progressive activists in Philadelphia.

The summit describes itself as “the largest annual conference for progressives” and has long been a stop for Democratic presidential hopefuls, including this year.

Hill’s comments came less than a year after he lost his CNN perch after calling for a “free Palestine from the river to the sea,” during an appearance at the U.N. The statement was interpreted by many as a call for the elimination of Israel, something Hill denied.

He made his comments during a panel on “embedding Palestinian rights in the 2020 agenda,” which also featured statements that Israel was engaged in a “white supremacist” project.

In response to a question from the audience, Hill described the choices faced by young journalists when they tell stories about Palestinians.

“They’re like, I want to work for Fox, or I want to work for ABC or NBC or whoever. I want to tell these stories,” he said. “You have to make choices about where you want to work. And if you work for a Zionist organization, you’re going to get Zionist content. And no matter how vigorous you are in the newsroom, there are going to be two, three, four, 17, or maybe one powerful person — not going to suggest a conspiracy — all news outlets have a point of a view. And if your point of view competes with the point of view of the institution, you’re going to have challenges.”

At the summit, t-shirts were sold grouping Zionism with racism, sexism, homophobia and antisemitism as maladies to be “resisted.”

The comments on the panel and the t-shirt sale both drew condemnation from Jonathan Greenblatt, the CEO of the Anti-Defamation League. In a statement to Jewish Insider, Greenblatt said “Zionism is nothing like white supremacy. Anyone who offensively claims Zionism is a white supremacist project is ignorant of the tremendous diversity of modern Israel and seeks to negate the millennia-old connection of Jews to the Land of Israel.”

He added that while the list on the t-shirts “includes antisemitism among things to ‘resist,’ this claim that Zionism is one of these horrible types of discrimination is, ironically, antisemitic.”

Other panelists on Friday seemed to imply a desire to eliminate the State of Israel entirely. Noura Erekat, a professor at George Mason University, proclaimed “the whole land is occupied” and said those “still having conversations about a two-state solution are either ignorant or malicious.”

Erekat also described Hawaii as occupied and discussed an “explicit project” led by Ashkenazi Jews in Israel to avoid “sully[ing] the blood line with becoming dark and oriental” by mixing with Sephardic and Mizrahi Jews.

The Netroots Nation summit also included a training session on “making Palestine part of the progressive agenda,” where Israel was described as helping to drive the “environmental crisis” due to its role “driving the profits of the petrochemical companies and the weapons industry.”

Much of the conversation focused on how to persuade progressive organizations to co-opt specific issues in the United States. Zaina Alsous, an organizer for the group Dream Defenders, said the goal was to “meet with organizations, proudly progressive organizations, and say ‘What issues are you working on and how do those connect with us wanting to build out a BDS campaign?’” Attendees also discussed how to link issues like “queer liberation” and “reproductive justice” with pro-Palestinian advocacy.

A spokesperson for Netroots Nation did not respond to requests for comment.

A number of other top presidential candidates, including former Vice President Joe Biden and Senators Bernie Sanders (I-VT), Kamala Harris (D-CA) and Cory Booker (D-NJ) have appeared at the summit in past years.