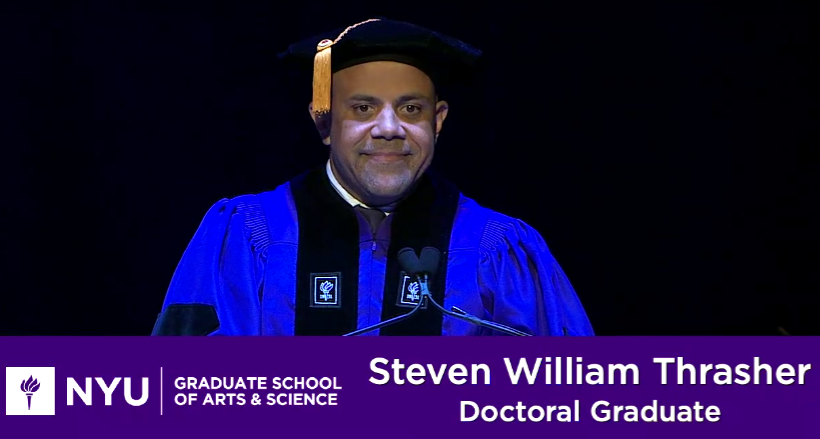 Stephen William Thrasher, an NYU doctoral graduate and professor at Northwestern, and a contributing editor at BuzzFeed, endorsed BDS and lauded NYU’s Department of Social and Cultural Analysis in remarks at NYU’s Doctoral Convocation Ceremony at the Beacon Theatre in New York City on Monday.

Thrasher: “I am so proud, so proud of NYU’s chapters of Students for Justice in Palestine and of Jewish Voice for Peace, and of GSOC, and of the NYU student government, and of my colleagues in the Department of Social and Cultural Analysis for supporting the Boycott, Divestment, and Sanctions (BDS) movement against the apartheid state government in Israel — because this is what we are called to do. This is our NYU legacy — that we are connected in radical love, and we have a duty and a privilege in this position to protect not the most popular amongst us, but the most vulnerable amongst us on every campus where we serve in every community where we live, in every place that we work.”

“This is our duty and we must stand together to vanquish racism and Islamophobia and antisemitism and injustice and attacks on women and attacks on abortion rights in Tel Aviv, in Shanghai, in Abu Dhabi, in New York City, in Atlanta, in Washington, in Los Angeles, in San Francisco and everywhere in the world. Finally, now I can relax.”

The University president, Andrew Hamilton, who has condemned the Department of Cultural and Social Analysis’s decision to boycott Israel, can be seen applauding Thrasher’s speech.