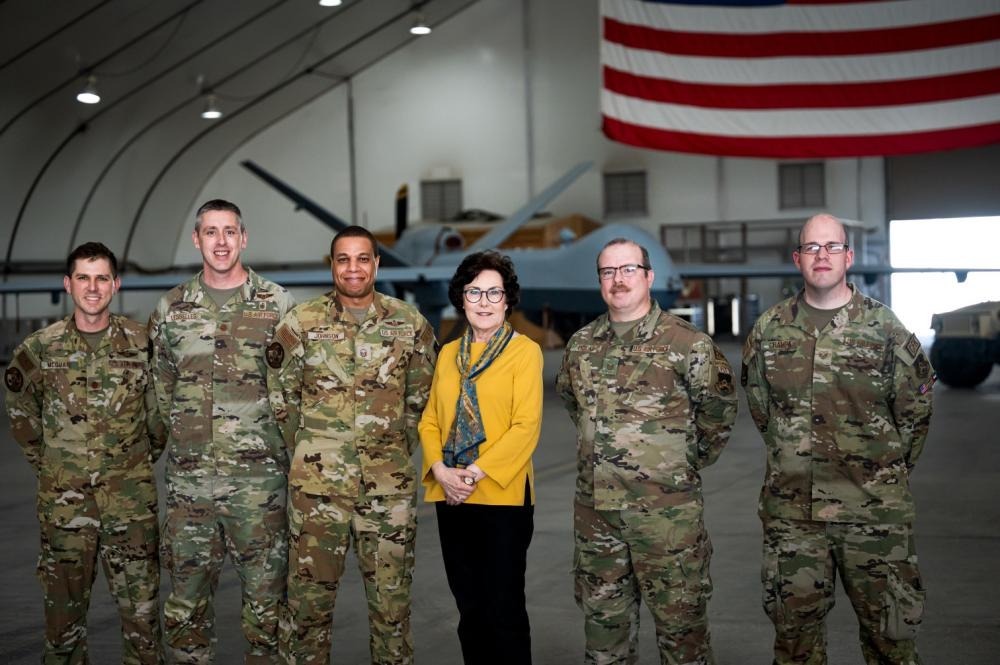 Sen. Jacky Rosen (D-NV)at the Dhafra Air Base in the UAE. The delegation of senators received a briefing from United States Air Forces Central on how the Abraham Accords are contributing to regional security.

Sen. Jacky Rosen (D-NV), who returned last weekend from leading a group of fellow senators on a delegation to Abraham Accords member countries, told Jewish Insider yesterday that she sees opportunities for the Senate to work this year on efforts to expand Middle East cooperation on air-defense and water-resiliency projects through the Arab-Israeli agreements.

It’s “particularly important that we continue to work and build on” the DEFEND Act — passed last year to promote regional air- and missile-defense cooperation, Rosen told Jewish Insider yesterday, following a press conference with other members of the delegation.

Rosen noted that several members of the delegation — herself and Sens. Mark Kelly (D-AZ), Dan Sullivan (R-AK) and Kirsten Gillibrand (D-NY) — are members of the Armed Services Committee, making them well-placed to work on the project, and said they’ll be meeting with with Armed Services Committee Chair Jack Reed (D-RI) later this week to discuss the issue further. “I’m sure a lot of others are interested as well as we begin this year’s National Defense Authorization [Act] process,” she added.

She also mentioned possibilities for expanding collaboration to protect waterways in the Gulf. The group met with leaders from Morocco, Bahrain, the UAE, Israel and the Palestinian Authority, as well as U.S. military personnel in Bahrain and the UAE, and visited the Abrahamic Family House, a multifaith complex in Abu Dhabi.

Sullivan said during the press conference that he sees an “enormous opportunity to do more” and that the air-defense would “directly address… the biggest threat in the region,” referring to Iran. The delegation members highlighted that Iran was a top concern for all of the leaders the group spoke with, including Palestinian Authority Prime Minister Mohammed Shtayyeh, according to Sullivan.

Sullivan said that the officials in the United Arab Emirates told the group they were “upset” that they felt the Biden administration had failed to respond to an attack a year ago by Iran-backed Houthi militants that killed three people in Abu Dhabi. Sen. Ted Budd (R-NC) echoed that message, saying that the group heard “again and again and again… the fear among our Middle East allies that America is not going to have [their] back.”

But Sullivan also cautioned that any Chinese involvement — including that of telecommunications company Huawei — in the participant countries’ security and military communication systems would be a deal-breaker for U.S. participation in any joint air-defense projects

Rosen further highlighted to JI possibilities for cooperative water resiliency projects in the Middle East, which she noted could also help the drought-stricken states of several of the delegation members. Several senators noted Israel’s specialty in innovative irrigation and agricultural projects.

Rosen told JI she thinks projects like this are the best path to facilitating further expansion of the agreements — focusing on the current relationships to deliver “tangible results… to show the benefit” of the agreements to other prospective members.

During the press conference, Rosen and Sen. James Lankford (R-OK), who co-led the delegation, again downplayed a report that Rosen had specifically requested not to meet with controversial far-right members of the Israeli government.

Rosen told JI that she and Lankford have been planning the trip for a year — well before the new government took office — and that they met with “high-level government officials” at each stop, painting the controversial ministers as “mid-level members” of the government.

Lankford added that he had never met with an Israeli finance minister — the job held now by Bezalel Smotrich — on any of the five trips he’s made to Israel. “It’s fascinating to me the media buzz on who we didn’t meet with, rather than what we actually did,” he said. “There’s, what, 117 members of the Knesset we didn’t meet with?… We’re meeting with all the key people.”

Rosen subsequently told JI that some Arab leaders had raised questions about Israeli policy toward the Palestinians, which has created flashpoints between Israel and its Arab allies in the first weeks of the new government.

“What every leader said is that they wanted to be sure that there was nothing that was going to be done that would impede both the Abraham Accords and the path to a negotiated two-state solution,” Rosen said. “We spoke with Prime Minister [Benjamin] Netanyahu and our delegation was very clear about keeping the status quo [in Israeli-Palestinian affairs] and not doing anything that would sacrifice or get in the way of a negotiated two-state solution. He heard us loud and clear, we’re going to continue to… let him know how we feel.”

The Nevada senator said during the press conference that the group had also urged Israel to “do more to combat Russian aggression in Ukraine” — an issue that has created some daylight between pro-Israel American lawmakers and the new Israeli government.

Generally, the members of the delegation sounded a positive note about prospects for the Middle East, echoing comments by Gillibrand to JI the day prior.

“When it comes to the Abraham Accords, in the 14 years that I’ve been going to the Middle East, I don’t think I’ve ever been as encouraged by the progress that I’ve seen,” Sen. Michael Bennet (D-CO) said, highlighting increased trade and travel among the new partners. He offered the caveat, though, that “we have a long, long way to go.”

Kelly added the group’s meeting with Palestinian Authority leadership “highlighted to me that there is a lot more work to do, not just with the Abraham Accords.”

Lankford acknowledged a continued “difference of opinion” between the Arab nations’ leaders — who support the Accords — and their citizens — who have been more reluctant to accept the agreements, but emphasized that “we’re going to work through this, understanding that this is a generational shift that’s there” and that the process will take time.

Bennet highlighted that most of the group’s meetings included discussions of rising antisemitism, demonstrating “real possibilities that might arise with the people-to-people engagements that are going to be made possible as a result of the Abraham Accords.”

Lankford noted that the delegation’s flight, on a military aircraft from the UAE to Israel over Saudi airspace, is the first time a U.S. military aircraft has ever made such a flight, itself a sign of regional progress.