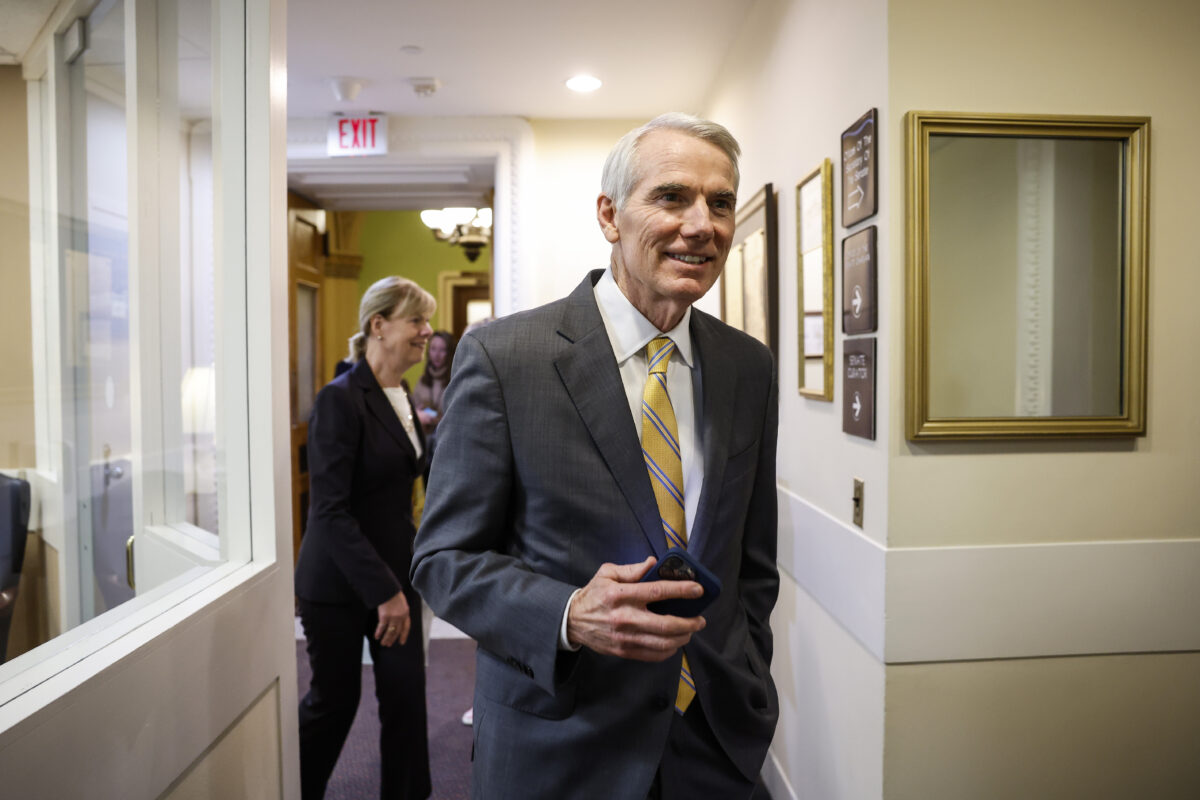 WASHINGTON, DC - NOVEMBER 29: U.S. Sen. Rob Portman (R-OH) arrives for a news conference after the Senate passed the Respect for Marriage Act at the Capitol Building on November 29, 2022 in Washington, DC.

Sen. Rob Portman (R-OH) is a longtime Methodist, having joined the church in the mid-1980s before marrying his wife. But in his decade in Washington, Portman has been a prominent voice for Ohio’s Jewish community, whose leaders are mourning the retirement from Congress of an ally and friend.

In his two terms in the Senate, Portman has promoted policies to combat the Boycott, Divestment and Sanctions movement, worked to expand the Nonprofit Security Grant Program and been a vocal supporter of Israel and the Abraham Accords. The longtime Ohio legislator is the ranking member of the Senate Homeland Security and Governmental Affairs Committee and a member of the Foreign Relations Committee.

“We’re losing someone in the Senate who we really relied on,” Jason Wuliger, a former member of the board of trustees of the Jewish Federation of Cleveland, told Jewish Insider. “He was more than just our senator, he was our friend. And he knew our issues well because he took the time to learn them to really make himself a part of our community over many years.”

Brad Kastan, a past president of the Columbus Jewish Foundation and longtime Jewish communal leader, called Portman “irreplacable” and a “steady hand” for the Jewish community, his state and the entire country.

“It’s really amazing the breadth of his involvement across so many issues that we as a community care so much about,” Kastan said.

Bonnie Deutsch Burdman, the executive director of community relations/government affairs for the Youngstown Area Jewish Federation, praised the personal touch Portman brought to his work in Washington, noting that, at her first meeting with the senator, “he had researched me and he knew exactly who I was, what my credentials were, and asked really interesting questions about the work that I did.” She said she’s since developed a “personal relationship” with Portman.

Portman praised the Ohio Jewish Communities umbrella organization in a statement to JI as  “an important partner to me” and “a critical voice on public policy issues.”

“I have been proud to work with the Jewish community throughout my years in public service and am particularly proud of our work combatting antisemitism and increasing funding for the Nonprofit Security Grant Program, which is benefiting nonprofits and religious institutions of all faiths,” Portman continued. “None of this could have been achieved without OJC’s efforts.”

Jewish leaders hosted a farewell event in Columbus for Portman earlier this month. Howie Beigelman, the executive director of Ohio Jewish Communities, said around 50 leaders from a range of agencies, and both political parties, turned out to the event in Columbus. Kastan highlighted the turnout from far flung areas of the state — some a several-hour drive from Columbus — for the event, which took place first thing on a Friday morning. “Everybody had a story,” Kastan added.

Beigelman said he had “lost count” of how much legislation Portman, working frequently in partnership with Sen. Ben Cardin (D-MD), had introduced to support Israel.

“From that perspective,” Beigelman said, “the community feels there’s no better friend in Congress for Israel than Rob Portman.”

Prior to running for Congress, Portman led the Office of Management and Budget and served as the U.S. trade representative under former President George Bush. Wuliger described Portman’s experience in trade policy in particular as a boon to his anti-BDS legislative efforts.

Portman was also a key figure in efforts to expand the NSGP, opening up funding to nonprofits outside of urban areas and increasing overall funding to the program.

Under the initial construction, Ohio’s Jewish nonprofits were mostly ineligible for grant funding and those in urban areas rarely received it, a situation Beigelman said has changed dramatically thanks to Portman’s work on the program. Now, over a third of Ohio’s Jewish agencies have received grants totalling $7 million.

“If you’re a day school student, or attend a synagogue or temple, if you have a loved one who uses a JCC, if you’re a college student at a Hillel or a Chabad, if you’re studying for ordination, if you volunteer with Jewish Family Services, if you have visited a senior living campus, or have a relative who’s buried in a cemetery here in Ohio, there’s almost no chance that you or those you care about aren’t safer today than you were five years ago thanks to Sen. Rob Portman,” Beigelman said in remarks during the farewell event.

Jewish leaders also praised the staff with whom Portman had surrounded himself.

“He’s got an amazing team,” Beigelman told JI. “And they’re just incredibly responsive and really helped him out obviously, in his work… [Their] door is always open, really willing to talk and find solutions.”

In his remarks to the group, Portman addressed the Tree of Life Shooting in Pittsburgh. The senator visited the Youngstown Jewish Community Center, not far from the Ohio-Pennsylvania border, shortly after the 2018 attack.

“As he started to tell the story, he was talking about getting a full appreciation of what the threats really were to our community and how we then had to live moving forward,” Deutsch Burdman recounted. “And he started to get choked up… He said that that visit to our JCC that morning had a very profound impact on him. It made him fully appreciate and understand what the threats were, and how important it was for the federal government to get engaged in helping to protect vulnerable nonprofits.”

During the event, Kastan also read out a letter from Asaf Zamir, the Israeli consul general in New York, which said in part, “My only hope is that future elected officials will follow the example that you have set. On a personal level I thank you for your steadfast commitment and unwavering support for the State of Israel and its people. Your words, actions and deeds have never gone unnoticed.”

Some Jewish leaders said they’d been in conversation with Portman’s successor, Sen.-elect J.D. Vance (R-OH) and were largely encouraged. Vance, who traveled to Israel while on the campaign trail, has also visited some in-state Jewish agencies and met with local leaders.

“He asks a lot of questions,” Beigelman said. “‘Why are these things important? And what made Portman the leader on this?’ He was really asking how he could step in and fill some shoes.”

Wuliger agreed, adding, “everything I’ve seen — I think he’s going to be an effective senator that we can count on.”

However, even as they look ahead to the future, Jewish leaders seemed confident that, in the words of Kastan, “we’re going to hear more from Rob Portman.”