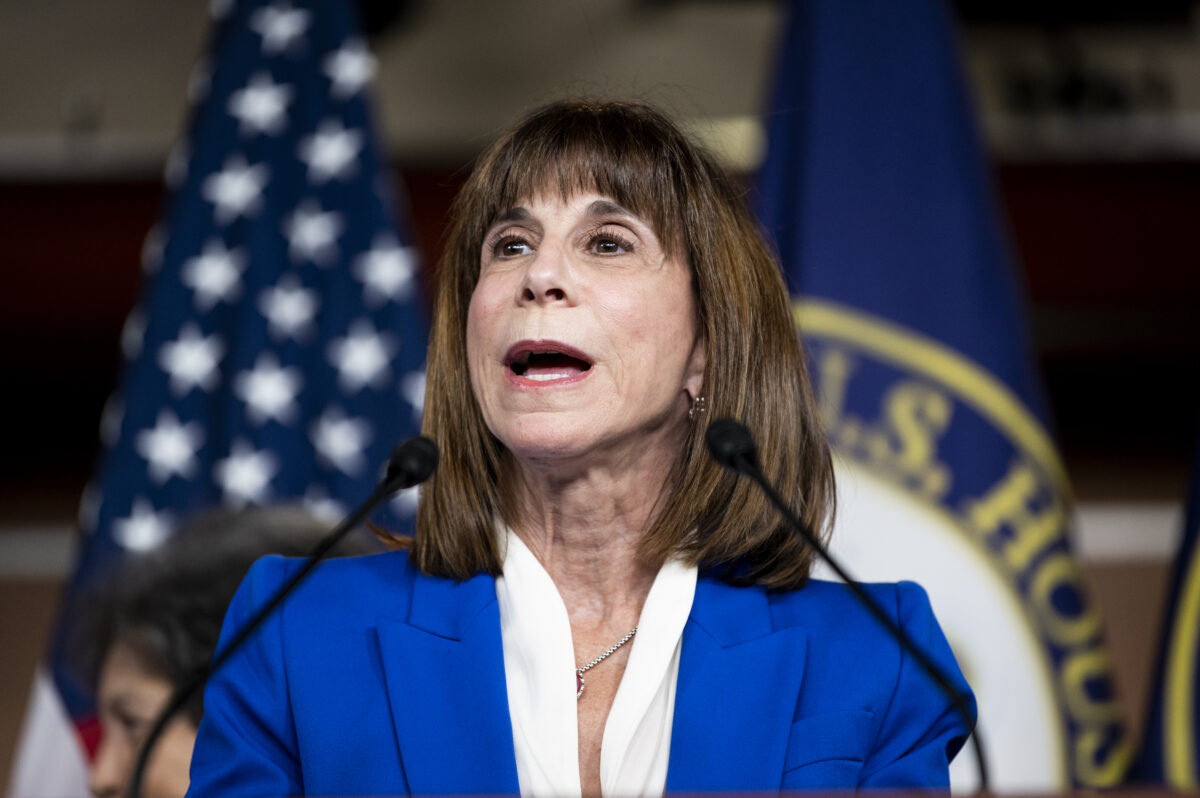 Rep. Kathy Manning (D-NC) speaks during the news conference on the introduction of the Medicaid Saves Lives Act on Wednesday, July 21, 2021.

Lawmakers from the House Bipartisan Task Force for Combating Antisemitism met yesterday with representatives of the FBI to discuss the agency’s 2021 hate crimes report, released on Monday, which was hampered by the failure of many major local law enforcement agencies to report data. Lawmakers pressed the FBI leaders on the reasons for the gaps, as well as other issues in their hate crimes enforcement procedures regarding antisemitism, according to Rep. Kathy Manning (D-NC), a co-chair of the task force.

The reporting lapses — which included non-participation from areas with significant Jewish populations, including New York City, Los Angeles and nearly the entire state of Florida — stemmed from changes in the way the FBI collected data this year. Previously, it had used multiple systems to collect hate crimes reports; this year, it only took data submitted through the National Incident-Based Reporting System (NIBRS), and many local law enforcement agencies failed to sign up for the system in time to report data for 2021.

But, according to Manning, two FBI deputy assistant directors explained to lawmakers yesterday that the FBI has been urging local law enforcement to switch over to NIBRS since 1990, initially with limited success. In 2015, the agency announced that, beginning in 2021, it would no longer accept data through other systems, giving agencies a six-year runway to switch. The previous system required only “summary information,” according to Manning, whereas NIBRS requires significant detail from the responding officer on the victim, perpetrator, motivation, weapon and other specifics of the incidents.

“What they did tell us is every state now has the capability of using the NIBRS system,” Manning continued. “We made it very clear that [the non-reporting is] not acceptable,” she said.

The North Carolina congresswoman, who is a former chair of the Jewish Federations of North America, also noted that, in addition to the jurisdictions that did not participate, Chicago, which also has a significant Jewish population, joined NIBRS but reported zero hate crimes in 2021 — which “does make you wonder, is that really the case?”

“It is inconceivable — impossible — that there were zero hate crimes in the city of Chicago for 2021,” said Michael Masters, a former chief of staff at the Chicago Police Department and the CEO of the Secure Community Network, an agency that works to promote and ensure security at Jewish institutions around the U.S. “It’s simply not an accurate reflection of the reality in the city.” He declined to speculate as to why the Chicago police might not have reported that data.

Manning said that she and her colleagues emphasized to the FBI that they’re not willing to wait until the next annual report for more complete data, and asked them to follow up in the first quarter of 2022 with “better data.”

“I hope that these two FBI [officials] will go back particularly to the communities that we talked about and say there’s going to be a lot of pressure from Congress to get this data reported,” she said. The FBI “didn’t have clear answers” on what Congress can do to help encourage communities to participate in NIBRS, Manning added.

She noted that the FBI officials said that most training on hate crimes that they provide to local law enforcement relates to inputting data into the NIBRS system, rather than on how to identify what constitutes antisemitism.

“I am grateful for their attempt to make sure that local law enforcement agencies understand how to address hate crimes,” she said. “But it doesn’t address one of the larger issues, which to me, is how you educate people about what antisemitism is.”

Manning also said the officials were unable to provide a clear answer on how they distinguish between protected hate speech and hate speech that incentivizes violence.

“The response I got was, ‘That’s a great question, and it’s really hard to give an answer to that,’” Manning said. “With what we see on social media, and the spreading of conspiracy theories and antisemitism online, I think that’s a question that, in some respects, is at the crux of the issue. And we need to be addressing [it].”

Manning said she passed along questions from Rep. Grace Meng (D-NY) on the operations of the bureau’s hate crimes hotline, but the FBI officials “didn’t didn’t know anything” about the issue.

Sen. Jacky Rosen (D-NV), speaking separately at a hearing on Tuesday, raised the issue of the gaps in reporting, calling them “very disturbing.”

FBI hate crime data has been riddled with inconsistencies for years, according to Masters, and even before the problems with the NIBRS system, hate crimes went under-reported. “We know irrespective of the data issue with NIBRS, there is a vast under-reporting,” Masters explained, and added that there are failures with law enforcement agencies around the country, in various jurisdictions, failing to adequately track and report hate crimes.

“We’ve seen some commentary about, ‘Why is the FBI data flawed?’ Well, the FBI has a voluntary reporting system, other than for federal agencies, and at the point that it’s in the system, there’s all sorts of other issues that have happened before that,” he noted. “It’s like blaming the chef for having a bad meal, when all the food that went into it was rotten.”

Still, even the understanding that NIBRS would have a slow implementation and that there were already challenges with reporting, Masters said, did not excuse the lack of cooperation. “I was disappointed to see the lack of reporting, for whatever reason, particularly amongst so many major cities and so many states,” he said.

Federal hate crimes data, Manning argued, is important for understanding the problem of antisemitism in the country, but also helps shape where and how funding and resources, like FBI agents, are allocated.

“We know anecdotally what’s going on out there, but we don’t have the actual data to show how dramatic the increase in antisemitism has been,” she said. “We think that that data is critical, number one to help people understand how alarming the situation is and number two to help us identify what are the different sources of the increase in antisemitism and what are the best methods we can use to combat it.”

Masters cautioned that discussion of the data should not lead lawmakers to avoid addressing the real problem — antisemitism and hate-based violence — head-on.

“The reality is that we don’t need any statistics to tell us antisemitism has increased. We don’t need a statistic to tell us that the faith-based community is under threat,” said Masters. “What I would suggest is while we have a very robust discussion about these statistics and work to fix them, it should not detract from the very urgent reality of an increase in hatred and antisemitism on the ground level.”

Gabby Deutch contributed to this report.