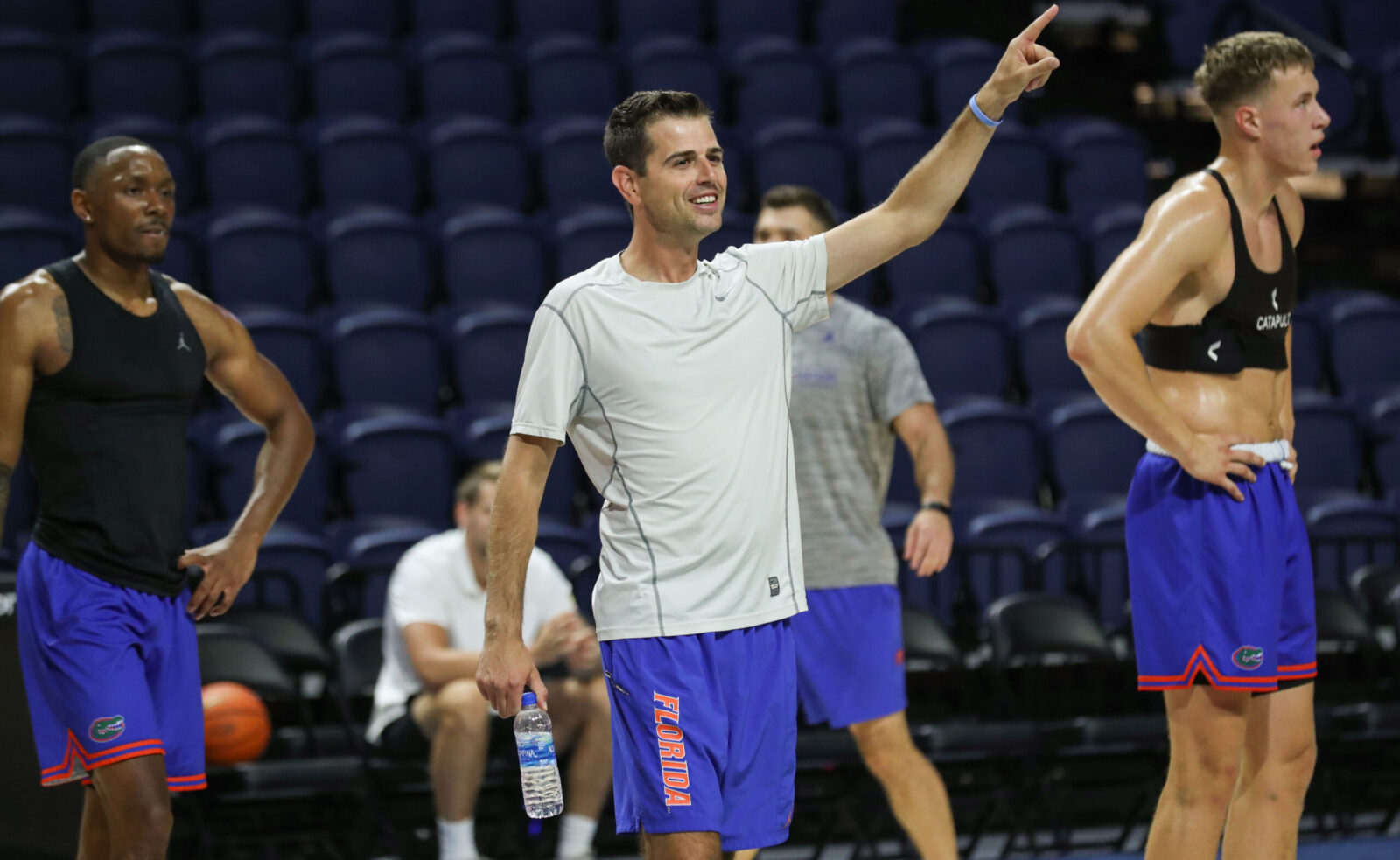 Todd Golden, the new head coach of the Florida Gators men’s basketball team, owes his professional success to the Jewish coaching community — and a connection made at the 2009 Maccabiah Games

Like a lot of Jewish kids, Todd Golden played basketball at his local Jewish community center when he was growing up, driving just five minutes down the road to the Phoenix JCC.

Unlike most Jewish kids, however, Golden took his JCC hoops experience to college’s big time. Earlier this year he was hired to be the head coach of the University of Florida men’s basketball team, signing a reported six-year, $18 million contract. In an effort to boost excitement about Gators basketball, one of his first moves when he got to Gainesville this spring was to visit UF’s three Jewish fraternities. (UF has the largest number of Jewish undergraduates of any American college, with 6,500 Jewish undergrads, according to data compiled by Hillel International.)

“There’s a huge Jewish community here at UF, probably one of the biggest at any institution in the United States,” Golden told Jewish Insider in a recent phone interview. “For me, it’s just … it feels really good to be able to be a part of it.”

Golden is one of a growing number of Jewish head coaches at major Division I basketball programs. At this year’s March Madness tournament, he won the Coach of the Year award from the Jewish Coaches Association, a nonprofit that connects youth, high school and college basketball coaches. “It’s a pretty neat brotherhood,” said Golden. “You don’t really think of the Jewish faith as being super, super strong in basketball. But I do feel like we’re making progress, which is cool.”

He rattled off a list of his fellow Jewish head coaches: Earlier this year, Jon Scheyer took over for the legendary coach Mike Krzyzewski at Duke. The University of California, Santa Barbara is coached by Joe Pasternack. Josh Pastner coaches Georgia Tech, and Eran Ganot, the son of an Israeli immigrant and the head coach at the University of Hawaii, is “like a big brother to me,” said Golden. Bruce Pearl has coached Auburn since 2014.

It was Pearl — who in recent months has gained a reputation as an outspoken supporter of Israel and a proud Jew, going back to comments he made during March Madness about applying the lessons of Purim to the war in Ukraine — who helped set Golden on his professional path.

“Todd is just a leader, a competitor. He looks like Jane, plays like Tarzan,” Pearl told JI. “He’s got this young, very youthful appearance. But he’s smart, and he’s tough, and he knows what he’s doing.”

Pearl and Golden, who is 37, met in 2009, when Pearl coached the U.S. men’s basketball team at the Maccabiah Games — the global Jewish games held every four years in Israel — to a gold medal, beating the Israeli team in overtime. (Scheyer, who was a point guard for Duke, was supposed to be on the team, too, until he had to drop out at the last minute to meet school requirements.)

At the time, Golden was playing professionally for Maccabi Haifa, an Israeli team, after a career at Saint Mary’s College in the San Francisco Bay Area. He was pretty self-aware about his own basketball skills: “I probably wasn’t good enough to play in that league as an American,” the 6-foot-3 former guard admitted. But the Israeli league had a rule that two of the five players on the court must be Israeli. “Because I made aliyah after my senior [year], I was able to play in Israel as an Israeli, which gave me a huge competitive advantage and allowed me to have a two-year professional career over there,” he explained.

His time in Israel followed an unexpected and successful college career at St. Mary’s, where he earned a scholarship and eventually became team captain after joining the team as a walk-on.

“There just aren’t many Jewish kids that work their way to get paid to play anymore, so he’s living the dream,” said Pearl, who talked Golden into joining his Maccabiah team during the Israeli basketball league’s off-season.

But Pearl saw the Maccabiah Games as more than just a basketball competition; it was an opportunity to help young Jewish men connect to their Jewish identity, and for Golden, the spiritual mission clicked.

“I thought my responsibility as the coach of that team was to take some Jewish boys, let them wear the USA uniform, but bring them back better Jewish men,” said Pearl, who at the time was the head coach at the University of Tennessee. He hosted the men for training camp in Knoxville, Tenn. “I took them to temple on a Friday night, and half the guys had never been to synagogue before. It just wasn’t part of their makeup. But this was gonna be more than just a basketball trip, and they were gonna learn about Israel, they were gonna learn about its history, like 3,000 years ago through post-Holocaust and current day, and we got real close as a team.” 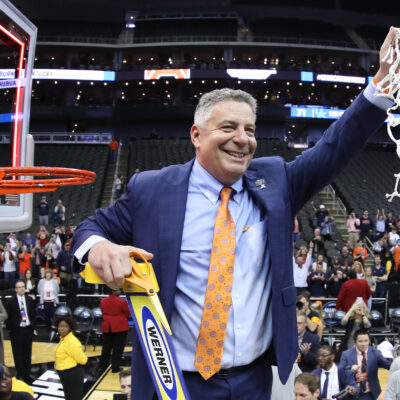 Auburn hoops coach Bruce Pearl: ‘Even in the midst of 1,000 rockets, we felt safe’

Golden played in the American Maccabiah games every summer when he was a teen, representing the Phoenix Jewish community in places such as Dallas, Charlotte, N.C., and Boca Raton, Fla. But playing for Team USA in Israel was a life-changing experience.

“It was that experience, honestly, that kind of provided different pathways and opportunities for me in my career, and I don’t think I would be the coach of Florida without that experience,” said Golden.

After moving back to the U.S. (Golden had been “homesick,” he said, although he did enjoy living in close proximity to Tel Aviv), he moved to San Francisco to work in sales and marketing.

“He was making real money, you know, taking advantage of his smarts and his personality,” Pearl recalled. But Golden wanted to get into coaching, eventually taking a job at Columbia University in New York. “I’m like, ‘Todd, what are you doing coaching? Forget about coaching. You had a great career, you know, go coach your son, and you’ve got to keep that job,’” Pearl counseled.

But Golden had caught the coaching bug, and he wanted to give it a shot professionally. After two seasons as an assistant coach at Columbia, he moved down to Alabama to join Pearl’s coaching staff at Auburn. Two years later, in 2016, he left for the University of San Francisco, ultimately becoming head coach and leading the Dons to the NCAA tournament earlier this year, its first March Madness appearance since 1998.

Golden hasn’t experienced antisemitism, either as a player or as a coach. “I think it’s because I’m pretty prideful about it. I don’t try to hide it and I’m not, like, running from it, and so I think people respect that,” he reflected.

In December, Golden will take on his mentor Pearl in an away game at Auburn. The two men now lead rival teams in the Southeastern Conference. But as Jewish coaches in the public eye, they share some goals, one of which is bringing their players to Israel. Pearl took his team there this past summer, where they played against Israeli teams and his players — most of whom are devout Christians — visited biblical sites. He wants Golden to take the Gators next year, and expose his squad to the Jewish state.

“There are a lot of people that don’t know, that haven’t been affected yet, that may be on the fence or that someday are going to face and see some real antisemitism, or experience some Israel hate. And now these kids are going to be in a position to handle it a little differently,” Pearl told JI’s “Limited Liability Podcast” in August.

“Bruce has not been shy about trying to get me to take the team over to Israel next year,” said Golden, who added that he has been exploring ways to fundraise for a trip. “We’re trying to do something where we take our team to Israel and then Africa, because we have an African kid in our program.”

At UF, his goal is to turn the Gators into a team “that’s getting deep into the NCAA tournament every year,” he said. When Golden was in college, the Gators won back-to-back national championships in 2006 and 2007, and he wants to make that a possibility again. The team lost in the second round of the NCAA tournament last year. The basketball season starts Nov. 7, with a home game against Stony Brook.

“Year one is really difficult in terms of making sure you have your foundation laid for your program, as well as getting everybody up to speed and on the same page. So [we’re] just really daily working on that,” said Golden. “The great thing is, I feel like we have some really talented student athletes and we have a good coaching staff, so I think we’ll be able to do it.”