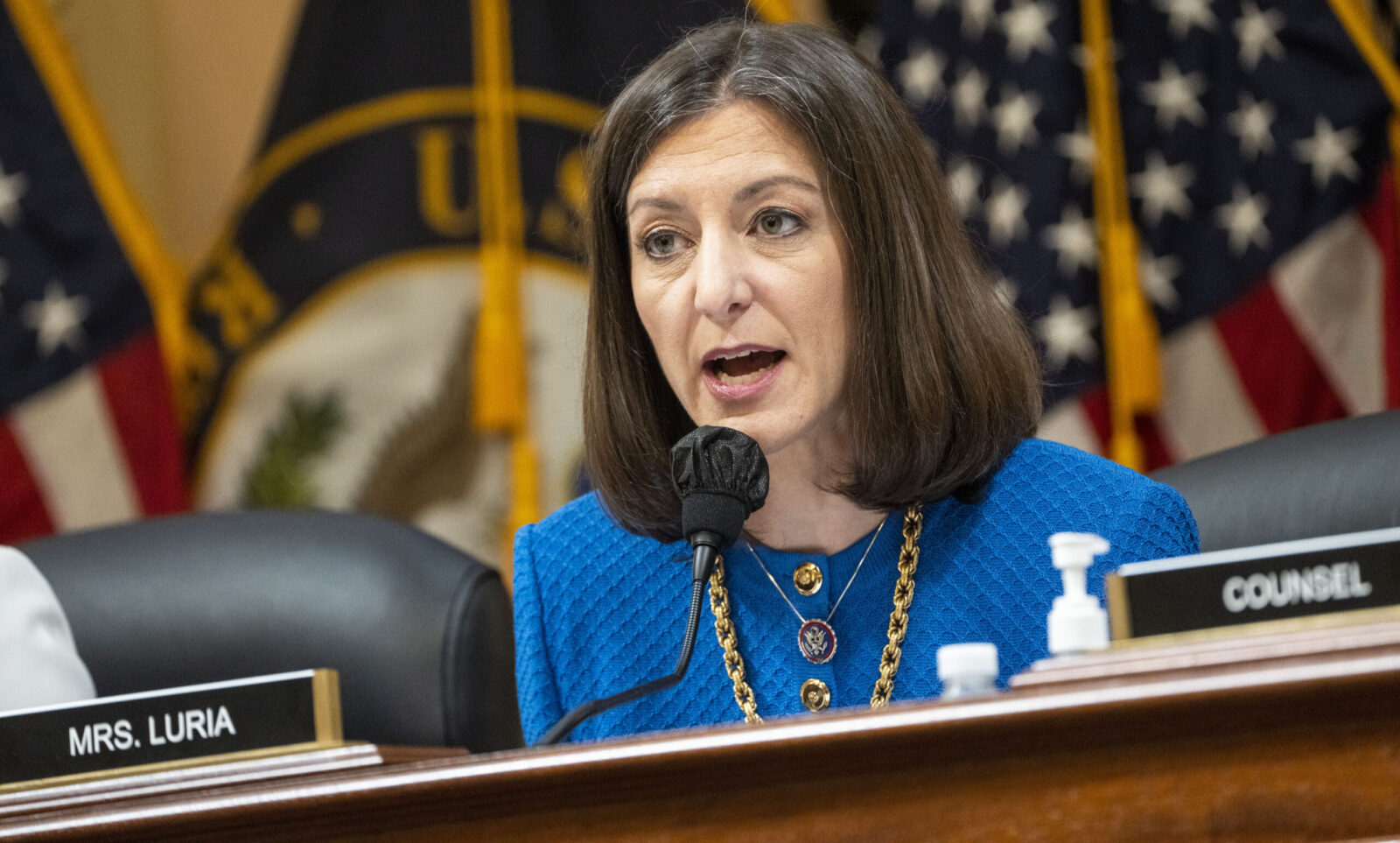 Voters like the member of Congress from Norfolk. Is that enough for her to get reelected?

When Rep. Elaine Luria (D-VA) made her opening statement during this summer’s Jan. 6 committee hearings, she seemed respectful, demure and soft-spoken, even as she twisted the knife. It was all very “Virginia,” so to speak: polite and deferential while getting directly to the point, which in this case was that former President Donald Trump acted selfishly and to the detriment of the safety of Americans by refusing to sufficiently respond to the Jan. 6 Capitol riot.

“Objectively, Elaine Lauria is a nice person. She’s not a flawed person. She’s a Navy vet,” said Bruce Meyer, who has lived in Virginia Beach since he was 13 and has been involved in local Republican politics almost as long.

In an election year that looks increasingly difficult for Democrats, nice might not be enough to win Luria a third term in the state’s 2nd Congressional District, which she flipped from red to blue in 2018.

“My Republican friends like her. I just don’t know that they’re gonna vote for her,” said Art Sandler, an AIPAC activist in Norfolk.

The race is one of the most closely watched campaigns in the nation; a recent poll found Luria and her opponent, fellow Navy veteran and Republican state Sen. Jen Kiggans, tied. Republicans need to win only five seats to return the House of Representatives to GOP control, and they view this district in southeastern Virginia as a prime pickup opportunity. Partisans and activists from across the ideological spectrum have spent millions of dollars on advertisements in the final weeks of the campaign.

“It really is a flip of a coin,” Ben Melusky, an assistant professor of political science at Virginia’s Old Dominion University, said of the election.

Luria, who is Jewish, has cultivated an image of herself as a political moderate willing to occasionally break with Democratic Party leadership in Washington. But she faces a tough test in Kiggans, who is also running toward the center in a campaign focused on economic issues.

In conversations with Jewish Insider, Jewish voters in the district and nearby Norfolk — a Democratic stronghold that was removed from the district during redistricting, making the seat lean more Republican — shared their perspectives on the race. While they tended to agree on Luria’s likeability, Jewish Republicans argue that voting with Democrats means Luria will not be a check on the party in power.

“She’s certainly not a far-left extremist,” Ian Cummings, a Republican activist in Norfolk, said of Luria. “But I certainly believe that she is a regular party-line Democrat, fairly, you know, borderline liberal.”

“We need moderate Democrats to be supportive of Israel. We need Democrats like Elaine who stand up to the far left of the Democratic Party, which Elaine does regularly,” said Sandler.

Adam Goldberg, a Navy veteran who ran as an independent for Norfolk Commissioner of the Revenue, the city’s top tax official, last year, told JI that Luria’s Democratic affiliation, at a time when a handful of progressive Democrats have loudly attacked Israel in Congress, is disqualifying for him.

“For me, especially as an American Jew, I just cannot support a party that will accept that sort of bigotry. They just can’t do it anymore. She’s a nice lady, but she represents a party that does not like us,” said Goldberg.

Kiggans, a nurse practitioner and former Navy helicopter pilot, was elected to the Virginia Senate in 2019 on a night that was otherwise a huge success for Democrats across Virginia. She defeated her Democratic opponent by just 500 votes.

She decided to run for state Senate at the urging of the Republican Professionals Network, a local networking group of which Kiggans was a member. Meyer, the Norfolk Republican activist, started the group more than two decades ago, and when the 2019 state Senate race came around, he began to identify potential candidates.

“I went around to our board and our group, I said, ‘Well, who do we know that’s a veteran, a mom, a professional — I listed a bunch of things, thinking, ‘Hey, if I get one or two, great,’” Meyer recalled. He and his wife Connie met with Kiggans after multiple people suggested she’d be a good fit. “She’s sitting on the couch, she’s like, ‘I’ve gotta do something.’” She had harbored a desire to run for office, Meyer said, but she hadn’t planned to until they reached out.

The mid-October poll that found Luria and Kiggans tied showed that the economy/inflation are the top issues for voters in the district, followed by abortion and threats to democracy. Luria, who serves on the House committee to investigate the Jan. 6 Capitol riot, has sought to highlight Kiggans’ hesitancy to discuss where she stands on matters related to the 2020 election.

One of Luria’s closing ads calls Kiggans an “election denier,” and features a clip of Kiggans walking away when a reporter asked her whether President Joe Biden was “fairly elected.” In June, when Kiggans was asked a similar question, she did not comment on the election: “I’ll just say this, Joe Biden lives in the White House and I wish he didn’t,” she told a local news station.

But Luria’s service on the Jan. 6 committee, which has been criticized by most congressional Republicans, is politically precarious. “I think that this work is important and necessary and much more important than whether I get elected again or not in the next election,” she told JI in July 2021. (Neither Luria nor Kiggans’ campaigns responded to interview requests for this story.)

“I’m a Republican, and I’m glad that she spoke up. I’m proud of some of those others — Cheneys and Kinzingers of the world who are able to stiffen their backbone and say what needs to be said,” said Jeff Brooke, referring to Reps. Liz Cheney (R-WY) and Adam Kinzinger (R-IL), two Republicans who have been critical of former President Donald Trump’s false claims about election fraud in the 2020 election. Brooke no longer lives in Luria’s district after redistricting. “I hope that their kind won’t be swept out of Congress, but I don’t know, it doesn’t look good.”

Jody Wagner, a former Virginia state treasurer and a small business owner in Virginia Beach, supports Luria’s work on Jan. 6, but doesn’t think it has much purchase with undecided voters. 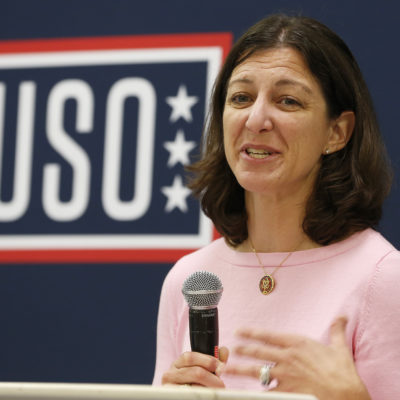 Luria: Jan. 6 committee ‘much more important than whether I get elected again’

“Unless you’re a lawyer, which I am, or a historian maybe, the whole rule of law and peaceful transfer of power, you probably aren’t that into it,” said Wagner, a Democrat. She’s more hopeful that Kiggans’ position on abortion, “which has been a little murky,” will sway voters to back Luria, who is pro-choice and criticized the Supreme Court decision that overturned the constitutional right to abortion. Kiggans, who has called herself “100%, unapologetically pro-life, has avoided saying whether she would vote for a national ban on abortions after 15 weeks of pregnancy, but a campaign spokesperson said she supports “protecting babies from 15 weeks on.”

Meyer, the Virginia Beach Republican, thinks Kiggans has put the election issue to bed with her comments about Biden being president. “She basically says, Look, I’ve already addressed that, you know, I want to focus on the economy and move on.’ She doesn’t want to have it be a distraction,” he said. “At the end of the day, it comes down to, ‘Can I afford to put gas in my tank? Can I afford to put food on the table?’”