A new book from journalist Linda Kinstler examines how society remembers the Holocaust, and the forces who would rather forget 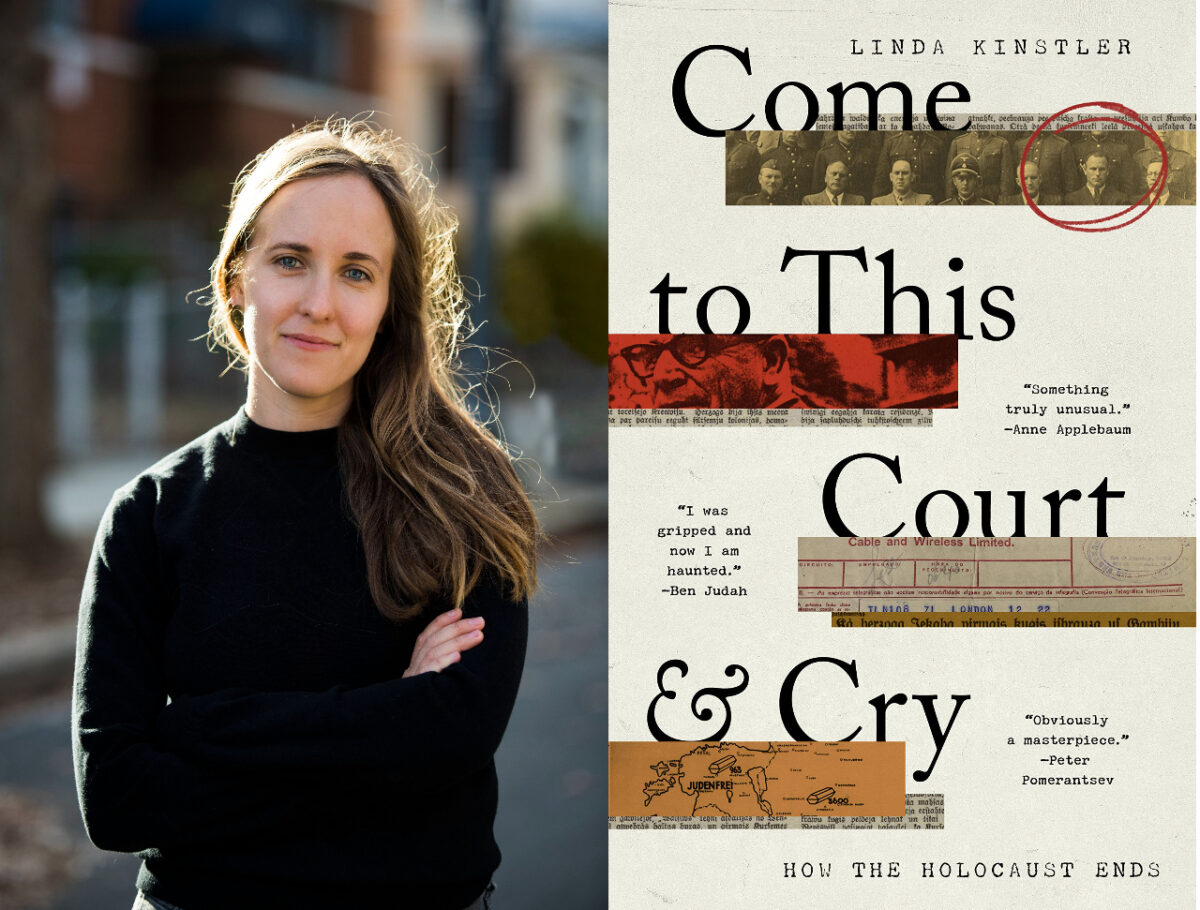 “Is it possible,” asks Yosef Yerushalmi, a scholar of Jewish history, “that the antonym of ‘forgetting’ is not ‘remembering,’ but ‘justice?’”

This is the question that drives Come to This Court and Cry: How the Holocaust Ends, a new book from journalist Linda Kinstler that explores how society remembers and honors the victims of the Holocaust — and warns that the power of survivor testimony is under threat today from the forces of nationalism and authoritarianism.

“The whole book is very much rooted in a desire to see through this vision of Jewish justice, this idea that the survivors gave their testimonies and they gave them for all time, and they expected them to last through various transitions, through upheavals,” Kinstler told Jewish Insider in a recent interview. “Now, it seems like just at the precise moment when they’re dying, [the testimonies] are starting to collapse.”

Kinstler explores these themes primarily through the story of Herberts Cukurs, a famed aviator known as the “Latvian Lindbergh” who later served in a Nazi killing brigade responsible for the murders of tens of thousands of Jews. In 1965, he was killed in Uruguay by Mossad agents who, just a few years earlier, had captured Adolf Eichmann in Argentina and brought him to Israel to stand trial.

Cukurs came on Kinstler’s radar because of an unusual criminal investigation: Seventy years after the Holocaust, a Latvian prosecutor “reopened” Cukurs’ case to try to prove his innocence and make him something of a martyr for the Latvian nation.

“I discovered this criminal investigation in Riga,” Kinstler recalled. “I had already been studying all these approaches to historical memory and justice, and then I found myself really in one of them, by virtue of my unfortunate personal connection to the story.”

Kinstler is referring to her grandfather Boris Kinstler, one of Cukurs’ comrades in a notorious killing unit called the Arajs Kommando. Boris vanished mysteriously in the late 1940s after he was believed to have become a KGB agent, but despite her years of research, Kinstler cannot fully verify his story. Boris never even met his son — Kinstler’s father — but his ghost looms large in the family’s memory. Kinstler’s summers were spent visiting a family home in Latvia with her grandmother, who never spoke of her husband. Kinstler’s mother, also from Latvia, is Jewish.

The book is not meant to be redemptive. “I’m not looking for truth about my family primarily. I would say I really felt an obligation because in Jewish tradition, you’re taught ‘Justice, justice, you shall pursue,’” Kinstler explained. “I thought, ‘OK, here is something interesting, and it looks like injustice to me. Can I follow it and understand what’s going on?’”

In the book, Kinstler, a University of California, Berkeley doctoral student who writes often about historical memory in Eastern Europe, charts the many efforts to seek justice for victims of the Holocaust over the years. In the wake of such an incomparable atrocity, prosecutors at Nuremberg, then in Germany and ultimately in Israel, had to create their own definition of justice: What crimes should Nazis be charged with? What about a high-level official who personally killed no one but set policy that led the murder of millions? What was the burden of proof? And most importantly, how would prosecutors even begin to collect the testimony of survivors who were so scarred by what they saw — and by the doubt they heard when they first began telling their stories — that they preferred to stay silent?

Since the Nuremberg Trials, which began just months after World War II ended, “we have placed — and rightfully so — so much emphasis on guarding survivor testimonies and using them in court,” Kinstler noted. “Not only that, but it turned into the courts as a place where we shore up all of these historical truths that we have fought for, such as, What actually happened during the Holocaust? Who were the perpetrators? Who was killed, and where? Because these things are very critical to our understanding of that period.”

“My goal,” Kinstler added, “is to call attention to what I think is a unique phenomenon to our current moment in which all of those things are at risk of being undermined, erased, eroded.”

Even while they were happening, the trials were imperfect; “international law” hardly existed in practice, and ordinary criminal charges seemed almost laughable compared to the horrible scope of the Holocaust. Sometimes, men who were known to have committed atrocities were given sentences that appeared much too short; often, the accused war criminals lied to the courts. But the exercise in justice was important, Kinstler argues.

The accused “have been given the kind of trial which they, in the days of their pomp and power, never gave to any man,” Robert Jackson, the chief U.S. prosecutor at Nuremberg, said in his closing statement. “The extraordinary fairness of these hearings is an attribute of our strength.”

As Kinstler follows the course of Latvian history, and the country’s attempt to reinvent itself after the fall of communism, she examines how the Baltic nation has sought to remember the Holocaust. Like other European nations in the post-Communist era, Latvia began to publicly examine its history, and reckon with the country’s strong faction of Nazi collaborators.

“In theory, the sudden embrace of the past inaugurated an era of acknowledgment, awareness, education and repentance,” she writes. “In practice, it meant that the performance of penitence became a proxy for Europeanness.” Any European might come across a “stumbling stone” marking a place where a victim of the Nazis once lived; an unsuspecting tourist to Budapest will discover the “Shoes on the Danube Bank,” the monument honoring the Jews who were shot at the water’s edge. Holocaust memorials are everywhere, and it appeared that Latvia was headed in the same direction.

But a “revisionist renaissance” was soon underway. Kinstler writes about a play, often greeted with standing ovations, where the actor who played Cukurs asked: “Am I a hero or a victim?” An art exhibition in the city of Liepāja hinted at similar themes.

“The pattern that we see is that figures who were well-known during the interwar period — like Cukurs, who was famous and was everywhere, and people were very familiar with him — they want to see him restored. They don’t want to see him maligned, and so he gets kind of appropriated and made into this national symbol,” said Kinstler. “It’s a desire to erase a whiff of collaborationism.”

She writes about Latvia, her ancestral homeland, but the phenomenon is “more pronounced elsewhere in the region, undoubtedly,” Kinstler said. “That’s what I was trying to call attention to, because it’s not like any of these things are going to go away. It’s not like denialism is all of a sudden going to stop and [people] are going to stop trying to erase the whiff of collaborationism from national stories.”

When asked whether justice has been served for victims of the Holocaust, Kinstler paused. “I don’t know,” she said. “Justice can always be undone, which is part of the thing that I wanted to illustrate. You can’t just say, ‘OK, it was achieved, now we can move on.’”

In other words: Kinstler has written an ode to the mantra “Never forget.”