Jewish legislators first raised concerns about state Rep. Dawn Johnson when she shared a Daily Stormer story in 2020. Johnson has since endorsed Republican Don Bolduc in his Senate bid 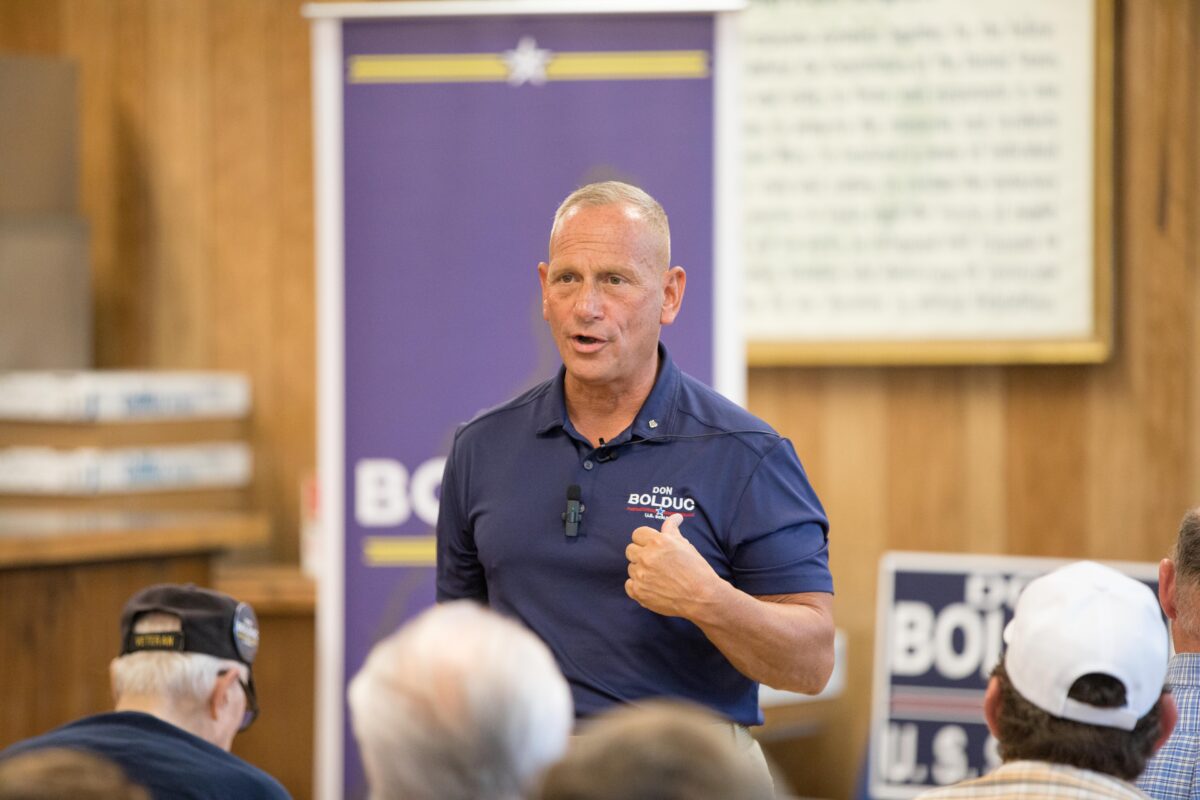 Last summer, a group of five Jewish Democrats in the New Hampshire state house forcefully spoke out against a GOP fundraiser being co-sponsored by a Republican lawmaker who, months earlier, had shared an article from a well-known neo-Nazi website on social media.

Now, as New Hampshire voters head to the polls, one of those legislators is advancing the fight as he calls on Don Bolduc, a top Republican candidate for U.S. Senate, to reject an endorsement from Dawn Johnson, who drew fierce and bipartisan backlash after she tweeted a link to The Daily Stormer two years ago.

Paul Berch, a longtime Democratic representative from southwestern New Hampshire, said he learned with “regret” that Bolduc, a retired Army general, had accepted support from Johnson, whom Berch accused of amplifying “a virulent and hateful meme about Jews.”

The article, which promoted a discredited conspiracy theory about election fraud in the 2020 presidential race, featured an antisemitic cartoon of a grimacing Jewish man with a long, hooked nose bearing a “rent hike” notice alongside a doctored image of Georgia’s Republican governor, Brian Kemp. “Riggers, Jews … Bad News!” the meme stated.

“Perhaps Ret. Gen. Bolduc is unaware of this history,” Berch, who is regarded as a leading voice against antisemitism in the New Hampshire state house, said in an email to Jewish Insider on Sunday. “I call upon him to forthwith reject this endorsement.”

Bolduc’s campaign did not respond to requests for comment from JI.

Johnson faced widespread condemnation from both sides of the aisle — as well as calls for her resignation — when she posted the Daily Stormer article in December 2020. The newly elected state representative had initially attempted to upload the link to Facebook but was blocked from doing so. “When you try to share truth FB says NOPE we will not allow it,” she griped at the time.

Amid the blowback, Johnson, whose Twitter account is no longer active, expressed “regret” for amplifying what she claimed to have viewed as “a benign link about Georgia politics.”

In an interview with JI on Monday evening, Johnson said she had found the Daily Stormer article through a “Google search” and did not immediately “think anything of it” because she had never heard of the site before. “I don’t live in that world,” she said, adding: “I’m not like that at all.”

Johnson claimed she had not noticed the antisemitic meme and was otherwise unaware it was offensive when she was roundly criticized for sharing the post. “I didn’t even understand it,” she said of the cartoon. “Someone had to explain it to me.”

She now acknowledges that the meme was objectionable, she said, even as she suggested that she would not have come to that conclusion on her own. “It is antisemitic once they explained it to me,” Johnson told JI. “I don’t agree with anything like that.”

Johnson said it was “ridiculous” that she is still facing scrutiny for the post, arguing that Berch, with whom she serves in the state legislature, “knows that’s not me.”

“He knows I don’t believe in any of that,” she told JI. “So why would they reject me for an honest mistake and then try to get me to admit something I wouldn’t do?”

Johnson explained that she is supporting Bolduc — whose father, she said, once helped her run for a local school board position — because he is “well-known” in her community. “I believe in his values,” she said. “Don Bolduc supports me and I support Don.”

Bolduc included Johnson’s name near the top of an extensive list of endorsements from New Hampshire state legislators published to his campaign site in late July. “I’m honored to earn the support and trust of these true patriots who believe, like I do, our greatest days are ahead, and together we can build back American Strength,” Bolduc said in a statement.

Johnson’s imprimatur has received little if any notice leading up to Tuesday’s primary, even as Jewish state lawmakers and other critics have continued to oppose the Republican legislator, most notably when she was among the sponsors of a Republican fundraiser last year.

In a joint statement, Berch and his colleagues had exhorted three other sponsors to pull out of the event, including Gov. Chris Sununu, a Republican, as well as Karoline Leavitt and Matt Mowers, who are seeking the GOP nomination in New Hampshire’s bitterly contested 1st Congressional District on Tuesday.

“As elected leaders, it is important for all of us to make clear that bigotry, racism, hatred and antisemitism have no place in our political process,” the Jewish state legislators wrote last August.

Their request went unaddressed by Mowers and was rejected by Leavitt, according to WMUR, a local news site. A representative for Sununu, who had previously denounced Johnson’s antisemitic post, told WMUR that the governor stood by his remarks but had no control over the list of attendees.

The last-minute endorsement underscored growing concerns from national Republican leaders who fear that Bolduc, a hard-right election denier, is too extreme for the general election — among just a handful of races that could decide which party controls the Senate next year.

Former President Donald Trump has stayed out of the primary but recently praised Bolduc — who has far outpaced Morse in some polling but has otherwise lagged in fundraising — as a “strong guy, tough guy.”

Bolduc, who unsuccessfully ran for Senate in 2020, has leapt into contention ahead of the primary, even as he has drawn scrutiny for a host of controversial statements. The former general has called Sununu “a Chinese Communist sympathizer,” voiced support for sending U.S. forces into Ukraine and advocated for abolishing the FBI as well as repealing the 17th Amendment, which allows for the direct election of U.S. senators by popular vote.

Unlike Johnson, however, Bolduc has no apparent record of problematic statements regarding Jews, despite welcoming her support.

Jeffrey Salloway, a Jewish Democrat who serves in the state legislature, said that Johnson’s endorsement was “not a surprise” because she and Bolduc are both from the city of Laconia in central New Hampshire. “He is a favorite son,” he said of Bolduc. “I doubt he is a great fan of the representative’s positions.”

He said the endorsement also makes sense because Bolduc has aggressively courted far-right supporters like Johnson as he seeks to juice turnout in what is expected to be a tight race for the nomination.

While Salloway had joined Berch in criticizing Johnson’s involvement in the fundraiser last summer, he told JI that he “would not ask” Bolduc to renounce her support before the primary. “I can see him not being willing to reject it,” he said. “He is watching his right flank hard because he is depending on them.”