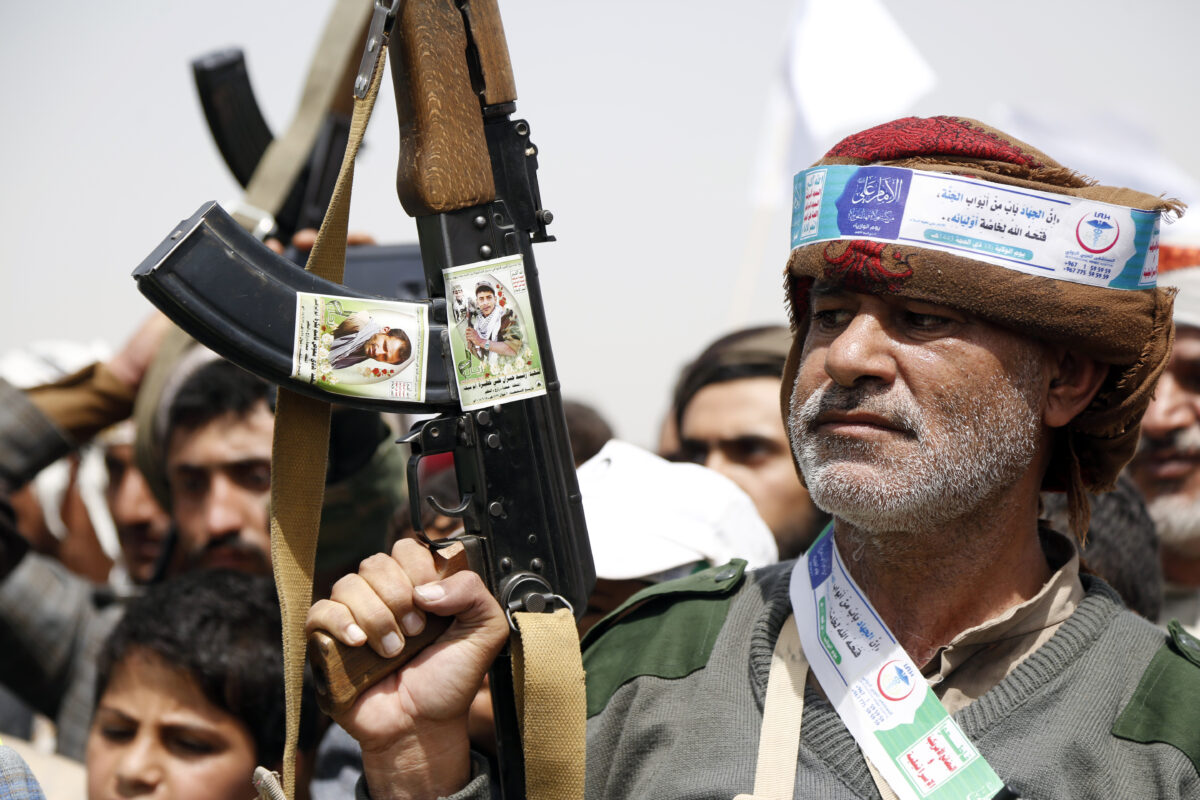 Yemenis who are supporting the Houthi group, participate in a celebration held to mark Eid Al-Ghadir on July 17, 2022.

A group of activists, led by a Yemeni human rights activist, were on Capitol Hill last week to deliver a message starkly at odds with the approach advocated by many in the human rights community: In order to aid the Yemeni people, the Biden administration should reinstate the Houthis’ terrorist designation and resume offensive weapons sales to the Saudi government.

The Biden administration removed the Houthis, an Iranian-backed Yemeni militia group that controls a sizable portion of Yemen’s territory, from the Foreign Terrorist Organization list, arguing that the group and its affiliates are the only entities capable of delivering desperately needed humanitarian aid within much of Yemen. The administration also halted offensive arms sales to Saudi Arabia in response to the high number of civilian casualties at the hands of the Saudi-led anti-Houthi coalition.

The group was led by Wesam Basindowah, the president of the Yemeni Coalition of Independent Women, and included human rights and national security attorney and analyst Irina Tsukerman and Manel Msalmi, the president of the European Association for the Defense of Minorities, who also advises members of the European Parliament. The trip to Washington was timed to coincide with President Joe Biden’s trip to Israel and Saudi Arabia last week.

Prior to meeting with legislators, the group brought together 35 international civil society groups on a letter urging Biden to reinstate the FTO designation, arguing that the humanitarian situation in Yemen has worsened since the designation was withdrawn. The letter notes that Houthi attacks on Saudi Arabia have increased, as have internal civilian casualties, the use of mines and child soldiers and other human rights violations.

“What they are doing towards women and children is completely crazy. It’s a human rights violation and we should not consider dealing with the Houthis or negotiating with them because they do not respect the truth,” Msalmi said in an interview with JI. “They are not peace-builders, so we cannot negotiate with this terrorist group.”

Tsukerman argued that data collected by Basindowah’s group has shown that removing the Houthis from the FTO list has not led to any substantial decrease in deaths and that a majority portion of humanitarian aid provided to groups with ties to the Houthis has not ended up in the hands of civilians. She argued that working with broader networks of NGOs, with smaller and more easily traceable funding grants and projects, would be a more effective strategy.

“That is just propaganda that when they [took the Houthis] from the [terrorism] list, they [did] that for the humanitarian aid,” Basindowah argued.

The group also urged the resumption of offensive arms sales to Saudi Arabia. Basindowah placed the blame for civilian casualties on the Houthis, claiming that they use human shields and hide weapons caches within schools and other civilian locations.

“All of the mistakes of this war, the Houthis were responsible for,” Basindowah said.

The State Department said this week that its focus is on maintaining the current truce in Yemen.

“Humanitarian considerations continue to be an important factor in any decision regarding a Foreign Terrorist Designation of [the Houthis]. We are currently focused on securing, extending, and building on the UN truce in Yemen, which is having a tangible impact on millions of Yemenis and provides a credible opportunity for peace in Yemen,” a State Department spokesperson told JI. “The parties need to continue to choose peace and move toward a permanent ceasefire and the launch of an inclusive, comprehensive political process under UN auspices.”

“President Biden’s delisted the Houthis as a Foreign Terrorist Organization to appease Iran, and that decision has empowered terrorists across the Middle East and led to more innocent lives lost in Yemen,” Banks, who leads of the influential Republican Study Committee, told JI. “I’d like to thank Dr. Basindowah and her colleagues for the important work they’re doing to raise awareness of the Houthis’ atrocities.”

“Rooting out violence in the Middle East must start by countering Iran and their funding of terrorist proxies throughout the region, including the Houthis in Yemen,” McClain said. “Dr. Basindowah knows this all too well, and she continues to be a champion of human rights in the region. I am honored to have met her and discussed the ways we can work together to thwart Tehran’s tyrannical agenda.”