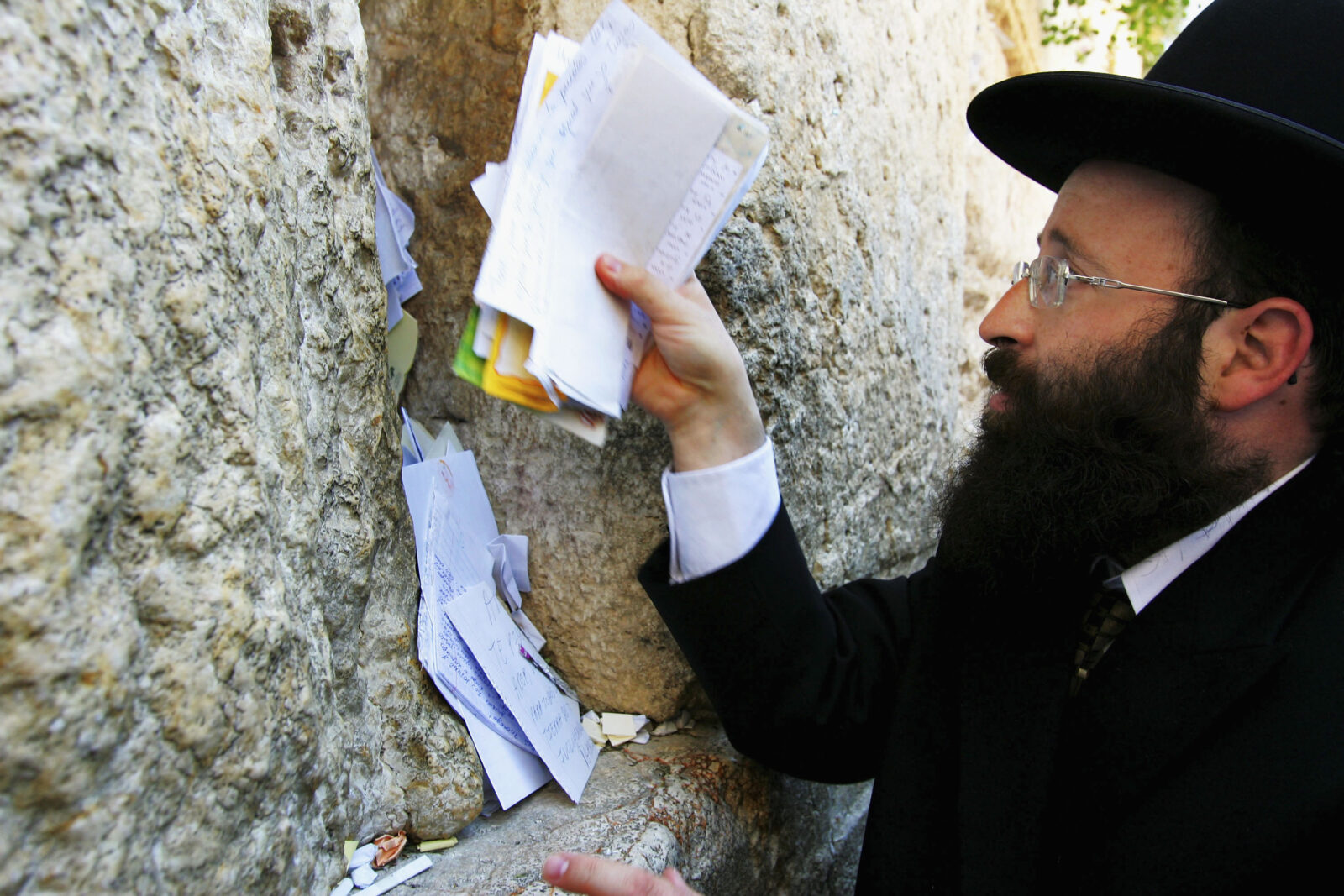 Striking a balance at the Western Wall

When Israel’s government collapsed last month, sending the country to its fifth national election in less than four years, hopes for revitalizing and implementing a government-approved plan to formally establish a pluralistic prayer space at the Western Wall in Jerusalem crumbled along with it.

Now, the so-called “Western Wall compromise,” which also recommended non-Orthodox Jewish representation on the council that manages Judaism’s holiest place of worship, is off the table once again.

This is a welcome development for Rabbi Shmuel Rabinowitz, who has served as rabbi of the Western Wall and Holy sites in Israel for some 25 years, who believes in maintaining the long-standing Orthodox customs at the sacred site. In an interview with Jewish Insider last week, he said it was important to “look at the whole picture” and not get caught up with “sensational headlines” on the matter. The plan, as Rabinowitz sees it, was never practical and there are “extremist groups stoking tempers and seeking to ignite the situation.”

Tempers have flared at the Western Wall in recent weeks, with divisions between different Jewish streams and how they view the holy site growing ever more visible in the absence of a viable and implementable solution.

Last month, non-Orthodox bar mitzvah services were interrupted by Haredi extremists calling worshipers – many of them visiting from the U.S. – “Nazis,” “Christians” and “animals.” They were filmed blowing whistles during the services and ripping apart prayer books, prompting Deborah Lipstadt, U.S. special envoy on antisemitism, to tweet that she was “deeply disturbed” and that the incident was akin to antisemitism. Jewish groups in the U.S. also expressed their outrage in a letter sent to new Israeli Prime Minister Yair Lapid and implored him to take immediate action.

On the same day, not far from where the bar mitzvah ceremonies were taking place, a group of women attempted to hold a non-Orthodox religious service at the women’s section of the Kotel plaza. The group was hassled and attacked as they read aloud from the Torah and donned prayer shawls, sacred traditions that Orthodox Jews believe should only be carried out by men.

Rabinowitz responded to the unrest, calling on all sides “to remove disputes and demonstrations from this sacred site and preserve the Western Wall as a holy and unifying site in the spirit of Jewish heritage and tradition.”

From his office inside the newly inaugurated Western Wall Heritage Center, the rabbi acknowledged the challenges of overseeing and managing the place he calls “the heart of the Jewish world.”

“We know that whenever there are two Jews, there are 10 opinions,” he told JI. “There are Ashkenazim, Sephardim, the more religious, the less religious and all types of religious and non-religious views and practices and they all come here to the Kotel.”

“I need to manage this place on a very thin tightrope so that everyone feels like this is their home,” Rabinowitz continued, noting that “there are extremist groups stoking tempers and seeking to ignite the situation” from both sides.

For the most part, however, Rabinowitz contended that the area was calm despite tensions between Jewish groups and clashes between Muslim worshippers and Israeli security forces at the nearby Al-Aqsa Mosque compound, which does have an impact on the atmosphere at the Kotel.

“This is the biggest synagogue in the world,” he said. “Before corona[virus], 12 million people visited a year and out of those, nearly everyone, 99.9%, came here in peace.”

“This is the closest we can get to the Temple, it’s the place where people come and open their hearts – there’s a reason it’s called the Wailing Wall,” continued Rabinowitz.

“People should not be coming here to express their worldview,” he added, highlighting that he would not allow any Jewish group – non-Orthodox or Orthodox – to act this way. “This should be the place where all Jews find the things they have in common.”

For close to a decade, however, the Kotel and how it is managed has highlighted a deepening rift between Orthodox and non-Orthodox Jewish streams, as well as gaps between Diaspora communities, particularly the United States, where many adhere to more liberal practices, and Israel.

A 2016 plan initially supported by all Jewish groups, as well as the government of then-Prime Minister Benjamin Netanyahu, recommended developing the southern section of the Wall leading to the Robinson’s Arch area for egalitarian prayer and families. That plan, however, was quickly shelved by Netanyahu following pressure from the ultra-Orthodox parties in his coalition.

More recently, members of the recently dissolved government expressed their support for reviving that plan, but the former prime minister, Naftali Bennett, also decided not to push the project forward out of fear such an emotionally charged matter might destroy his fragile coalition.

In the meantime, non-Orthodox groups are able to pray beside Robinson’s Arch, while the more familiar northern section of the Western Wall remains, under the authority of Rabinowitz, an Orthodox synagogue and is divided according to gender with modest dress required.

“I don’t get involved with how others behave in their own home,” said Rabinowitz when asked about the southern section. “There are synagogues that are more extreme than this place and there are communities that are much more devout; they complain about the Kotel not being segregated enough or about how modest dress is not adequately enforced. I need to find a way to navigate all these views.”

Rabinowitz used the analogy of a large family with 10 children who travel off to different corners of the globe. “In the end, each child adopts the traditions of the place in which they settle but when the father decides to bring all the family – children, grandchildren, great-grandchildren – back together for his birthday celebration, if they act according to their adopted traditions there will be an explosion,” he said. “When they are in the father’s house, they need to act according to the rules in their father’s house.”

“There was no dispute over how to act at the Kotel for 50 years, 100 years,” Rabinowitz added. “Women did not wear tefillin or read from the Torah, and no one argued what was right and what was wrong… At the Kotel, it can’t be that this group does this, and that group does that, and everyone just does whatever they want in opposition to one another.”

Yochi Rappeport, executive director of Women of the Wall, the group of women that regularly seeks to hold egalitarian services at the Kotel, told JI that her organization represented “Jews around the world from all streams of Judaism.”

“Hundreds of supporters travel to Israel to join our services, and thousands participate via our Facebook livestream,” she said, adding, “The Kotel agreement also has the support of the majority of Israelis.”

“To call our peaceful prayer services ‘provocative’ is not only inaccurate but offensive to all Jews who do not adhere to strict ultra-Orthodox doctrine,” Rappeport continued. “Our ultimate goal is to hold our prayers in the egalitarian section, once the proper renovations have been done and it is no longer under the management of the Kotel rabbi.”

She said that recent events at the site show “that the egalitarian section is unsafe at the moment.”

“Until the egalitarian section is made into a respectable and secure location for prayer, we will continue to pray in the women’s section, as is our right,” added Rappeport.

American historian Gil Troy, who has written extensively on the issue, said the “challenge would be solved if the [Kotel] plan was put into place.”

Not only would it give the egalitarian prayer space “a higher profile,” it would also “allow Jews to acknowledge the complexities of our people,” said Troy, who co-authored Never Alone: Prison, Politics and My People with former Jewish Agency for Israel Chairman Natan Sharansky, the chief architect of the Kotel plan.

Troy said that goodwill needed to be shown by both sides and whoever cares about “keeping the peace at the Kotel and maintaining the holiness of the place should be pressuring the government into making this plan work.”

From his office overlooking the Wall and the bustling plaza beneath it, Rabinowitz acknowledged it was “a stormy period” and said it was important to look at the substance of the place and emphasized the importance it holds for the Jewish people in the past and in the future.

“Every Jew, from every place in the world, is connected to this place,” he said. “The Kotel needs to be a place for every Jew.”