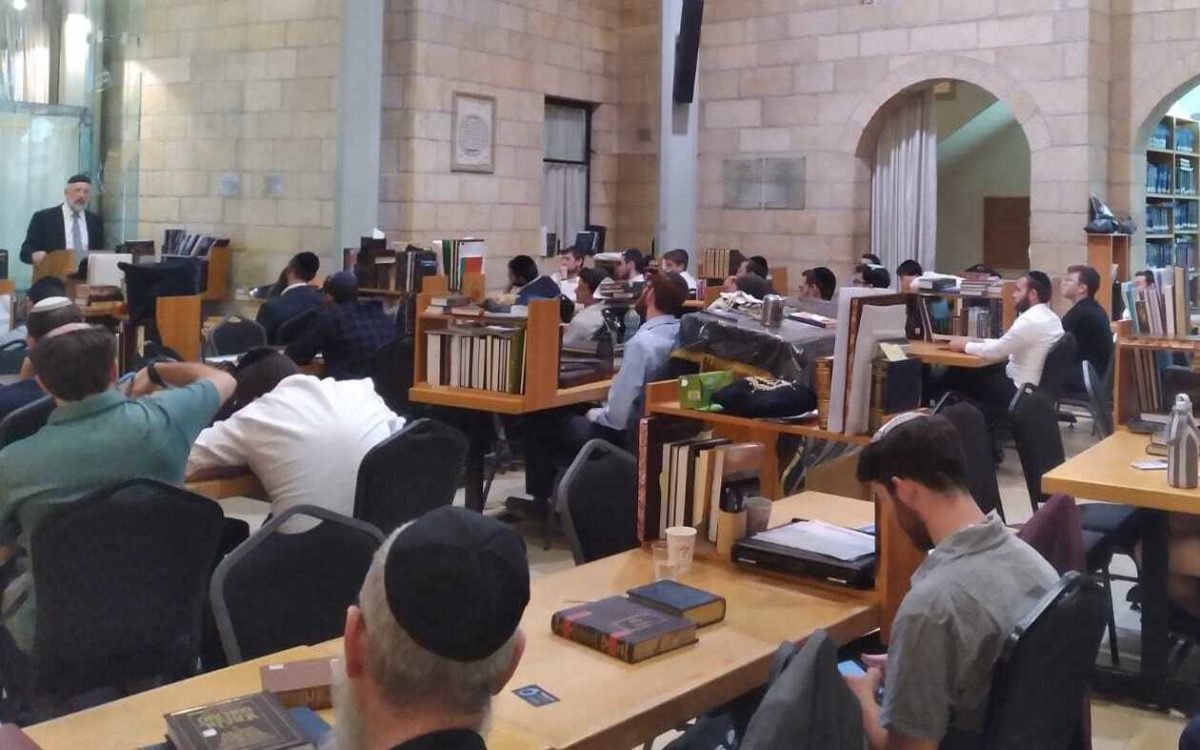 Some people call South Florida the “Sixth Borough.” At the start of the COVID-19 pandemic, an exodus from New York to the Sunshine State was national news, with emigres ranging from investment bankers to crypto entrepreneurs to ocean enthusiasts.

For those in South Florida’s Jewish community, the arrival of newcomers from New York was nothing new — even if the scale, in such a short time frame, was markedly larger. But as South Florida’s Orthodox community has ballooned, locals have acknowledged that the area’s educational institutions are not yet a match for the scale and breadth on offer in New York and New Jersey.

That is starting to change, beginning with the opening this fall of a new residential yeshiva in Boca Raton that will offer intensive Torah study as well as the option to earn a bachelor’s degree from New York-based Touro College. While Yeshiva of South Florida (YOSF) is located in South Florida, it aims to be a top-tier institution that will be an academic destination for young men from around the country.

YOSF is the creation of Rabbi Efrem Goldberg, the senior rabbi at nearby Boca Raton Synagogue, the hub of the local Orthodox community. In his more than two decades at BRS, Goldberg has overseen huge growth at the synagogue. Today, it serves more than 800 families and recently opened two satellite locations, because there is rarely housing available within walking distance from the synagogue. Goldberg has hosted leaders from across the political spectrum, and he has also collaborated with the broader Jewish community on events that cut across denominational lines.

Goldberg told Jewish Insider he first considered the need for more local educational institutions when his six daughters started to move away for different opportunities.

“I have all these daughters. They’re going to go to college or university. We’re flying back and forth, and we miss them,” he said.

The yeshiva may eventually host a seminary for women, but it is starting as a rigorous house of learning for young men to attend after a gap year in Israel. The vision for YOSF is larger than just a way to keep religious Jewish men from South Florida close to home.

It’s offering something akin to a liberal arts college, but instead of courses in Western civilization’s Great Books and philosophical discussions on John Locke, the curriculum, like those at yeshivas worldwide, features the Talmud and debates that were started by Torah sages of past generations.

Rather than a tree-lined quad in New England, YOSF offers palm trees and year-round warmth — perfect, perhaps, for walking to synagogue. “South Florida, I just think, is a comfortable, joyful, happy existence for most people,” said Rabbi Simcha Shabtai, who oversees learning initiatives at YOSF, “and for that to be the backdrop of this intensive pursuit really complements it very nicely.”

And just like a small liberal arts college might be cocooned in a tiny town miles from the nearest city, YOSF hopes to offer a bubble of sorts to its students, an immersive experience where learning comes first.

“This is saying you’re going to have seven days a week of a program, and you’re going to have the entire experience. It’s more like a college campus,” said Shayna Weiss, associate director of the Schusterman Center for Israel Studies at Brandeis University. Compare that to a place like Yeshiva University, or other yeshivas that are in the middle of densely populated Orthodox communities like Brooklyn or Lakewood, N.J. “There are people [in those places] who can stay in, but it’s kind of lame. A lot of people go home, unless it’s an official Shabbaton.”

On a practical level, none of what YOSF is offering is new. There are options for post-high school young men who want to spend their time studying Torah and earning a degree: Touro has its own Lander College in New York, which offers a yeshiva for men. Lakewood’s Beth Medrash Govoha has hundreds of courses of study for its thousands of students, who can earn a bachelor’s degree if they choose.

“I don’t think it’s meant to be substantively different than traditional yeshiva learning. Even ideologically, I don’t think that we’re coming to create some new ideological bent,” said Shabtai. “I think much of the sell is the setup, in the sense that in Israel, when guys go there post-high school, they have a unique environment that allows them to maximize spiritual growth within the yeshiva. Torah learning on its own, done in the right way, can lead to tremendous personal growth and spirituality.”

YOSF plans to open in August in a building about a mile from Montoya Circle, the heart of Boca Raton’s Orthodox community.

Boca used to be seen as a place just for retirees, but that’s changed in recent years. A 2018 study of the South Palm Beach County Jewish community found that 8% of Jews in the area identify as Orthodox, up from 4% who identified as Orthodox in 2005.

“Boca Raton is on the map all over the world in terms of its exploding Orthodox Jewish community, so people know that. They’ve heard of it,” said Goldberg. “One of the institutions that we’ve not really had or not had, at least reflecting our vision or worldview, is a post-high school yeshiva where young men who want to continue to study Torah, and maybe move on to the next chapter of their life, including college, have a place to go, which is immersive and intense.”

The first group of students, which will include roughly a dozen college-aged men, will live and study on the campus beginning in August. Only a small minority of those students will be from Florida. Annual tuition at the yeshiva is $12,000, and an additional $18,000 for Touro College, with substantial financial aid available. The yeshiva’s biggest donor, who wants to remain anonymous, is a New Yorker who also has a home in Florida.

Enrolling in Touro College’s bachelor’s program is not required, although Goldberg expects most students to do so. They can count their year of learning in Israel as credit toward a degree, so most will be at YOSF for three years. And since the students will be virtually enrolled in their classes at Touro, a private university system based in New York, they can major in nearly anything.

The YOSF team has anticipated what they worry will be one of the biggest challenges of operating in Florida: convincing men who want to get married that they will have options for dating in South Florida. Goldberg knows that there are young women in the area who will be excited to meet the YOSF students. But they are also building in occasional long weekends for students who want to date in New York to return there.

“We’re even prepared to offer some subsidies to help travel for dating, if that for some guys is going to be the obstacle to wanting to be in the yeshiva,” Goldberg explained.

A gap year in Israel has become a rite of passage for Orthodox students, and YOSF is directly tying itself to that experience. In the 2020-2021 school year, 12,000 mostly American Orthodox yeshiva and seminary students spent a gap year studying in Israel. That’s more than 70% of the 17,000 total foreigners who were granted student visas that year.

“Our tagline is, ‘Don’t just keep learning. Keep growing,’” added Goldberg. “It’s not that your major growth spurt happened in Israel, and now you’re technically just studying. It’s that your growth spurt’s not over. You keep growing.”

The yeshiva, while not technically connected to BRS, is meant to be a part of the growing Boca Jewish community. Six kollel students — married young rabbis, along with their wives — will study at YOSF, and the students will occasionally spend Shabbat meals with members of the community.

“A lot of these guys come from areas and neighborhoods where there are countless shuls, but not necessarily a community,” said Goldberg, “and being connected to a real community that has an identity as a community can be something that enriches them, and the community could gain from these guys, their energy, their intensity, their inspiration.”

What Boca has to offer the students, said Goldberg, is its “unique brand of Orthodoxy,” which he described as “much less judgmental [and] divided, much less interested in being critical of others.”

And the yeshiva has something to offer to Boca, too. “When cities make football stadiums, they’re like, ‘We’ve made it,’” said Weiss. “I feel like this is the same, like South Florida’s on the map in a serious Torah way.”