Bronx soccer field, a benefit of the Abraham Accords, is part of emerging friendship between Rep. Ritchie Torres and the UAE 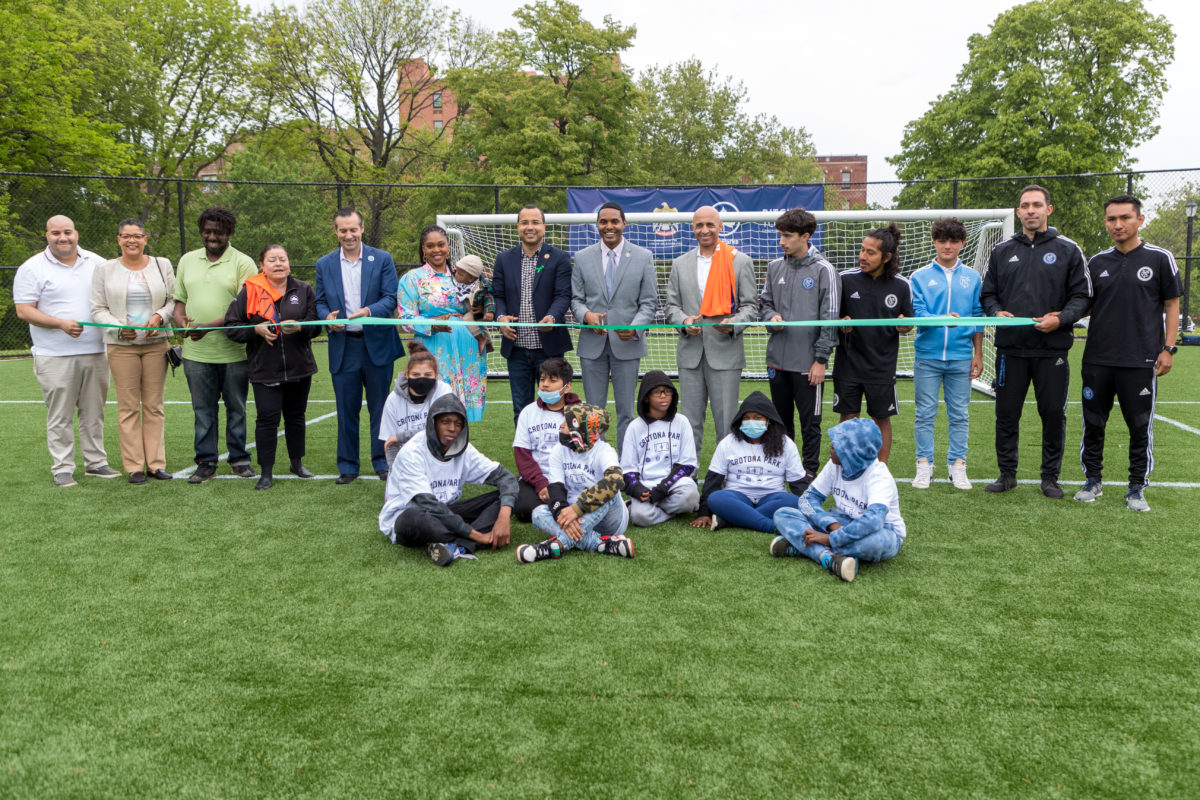 Rep. Ritchie Torres (D-NY) is no stranger to government malaise. Prior to his election in 2020, the Bronx congressman spent seven years as a New York City councilmember, working to wade through the sea of red tape that is government bureaucracy. So it impressed Torres when, last Friday, only a few months after first discussing the refurbishment of a soccer field in the Bronx’s Crotona Park, he was handed a pair of golden scissors as he stood on newly laid synthetic turf at the ceremonial ribbon-cutting.

The project was made possible thanks to a $363,000 donation from the United Arab Emirates and the New York Football Club (which is majority-owned by members of the Abu Dhabi royal family). At the ceremony, Torres was joined by UAE Ambassador to the U.S. Yousef Al Otaiba, standing alongside the congressman and a contingent of local politicians and city officials.

Otaiba has served as the UAE’s ambassador since 2008, but his public profile in Washington increased following his integral role in negotiating the Abraham Accords agreement that normalized relations between the UAE, Bahrain and Israel. Since then, Otaiba has become a popular figure at Jewish and Israel-related gatherings in Washington — frequently appearing at events to tout the Accords.

Through the ambassador’s new role as cheerleader for a changed Middle East, Torres, who has gained popularity in the Jewish community as a pro-Israel progressive, and Otaiba formed a friendship. The idea to rebuild the Crotona Park soccer field first occurred to Torres several months ago, when Otaiba mentioned that the UAE was seeking to fund the building and refurbishment of public soccer fields across the U.S.

“There’s no reason to think that the construction of the soccer fields would have gone forward without the Abraham Accords,” Torres observed in an interview this week with Jewish Insider. “The Abraham Accords has first order-, second-order and third-order consequences.”

Crotona Park covers 127 acres in the South Bronx, just below the Cross Bronx Expressway. Established in the 1880s, the land remained relatively undeveloped until the 1930s, when Robert Moses secured almost $3 million in funding from the Works Progress Administration to renovate the park, including building a public pool, tennis courts, and bathhouse. The park has remained relatively unchanged — undergoing a renovation of the bathhouse and pool in 1984 — with the exception of a 1945 expansion of the Cross Bronx Expressway that cut off the upper portion of the park. The highway expansion was one of the many under Moses that controversially cut through majority-Black neighborhoods in the city.

Before the refurbishment, the field was in disrepair, one of the many New York City parks left languishing by either a lack of funding or the snails-pace process of committee hearings and permitting. According to Torres, the UAE and NYFC funding not only sped up the process from years to months, it likely saved the city millions of dollars.

Prior to the park visit, Otaiba joined Torres at the Riverdale Jewish Center for an off-the-record conversation on the Abraham Accords before a local audience of around 60 people, including former Sen. Joe Lieberman (I-CT) and former Rep. Eliot Engel (D-NY). Otaiba and Torres, sitting on a stage with Rabbi Dovid Zirkind, spent over an hour in conversation.

“The Abraham Accords is a monumental achievement in the diplomatic history of the Middle East. It’s an achievement that few in the foreign policy establishment predicted or thought was possible,” Torres told JI afterwards, asking rhetorically, “Has there ever been a moment in human history when a Christian majority country, a Muslim majority country and a Jewish majority country came together to form, not merely a cold peace, but a genuine friendship?”

Torres is one of the more high-profile members of this Congress’ freshman class. The New York 15th Congressional District he represents encompasses portions of the West Bronx and the South Bronx.

“I represent the South Bronx, which is often said to be the poorest congressional district in America. There’s a chronic lack of access to amenities and programming.” Torres added. “For the children of the South Bronx to have access to a state of the art soccer field is both a game-changer and a lifesaver. It has a transformative impact on the lives of underserved children in the South Bronx.”

At the soccer field, scant mention was made of the Abraham Accords or Israel.

And while the events on Friday reflected the two sides of the district, the biggest takeaway was the surprising impact the Abraham Accords had on the entire district.

“Something as seemingly unconnected as a soccer field is, in its own way, a testament to the new trilateral friendship that has taken hold among the United States, the UAE and Israel,” Torres concluded.