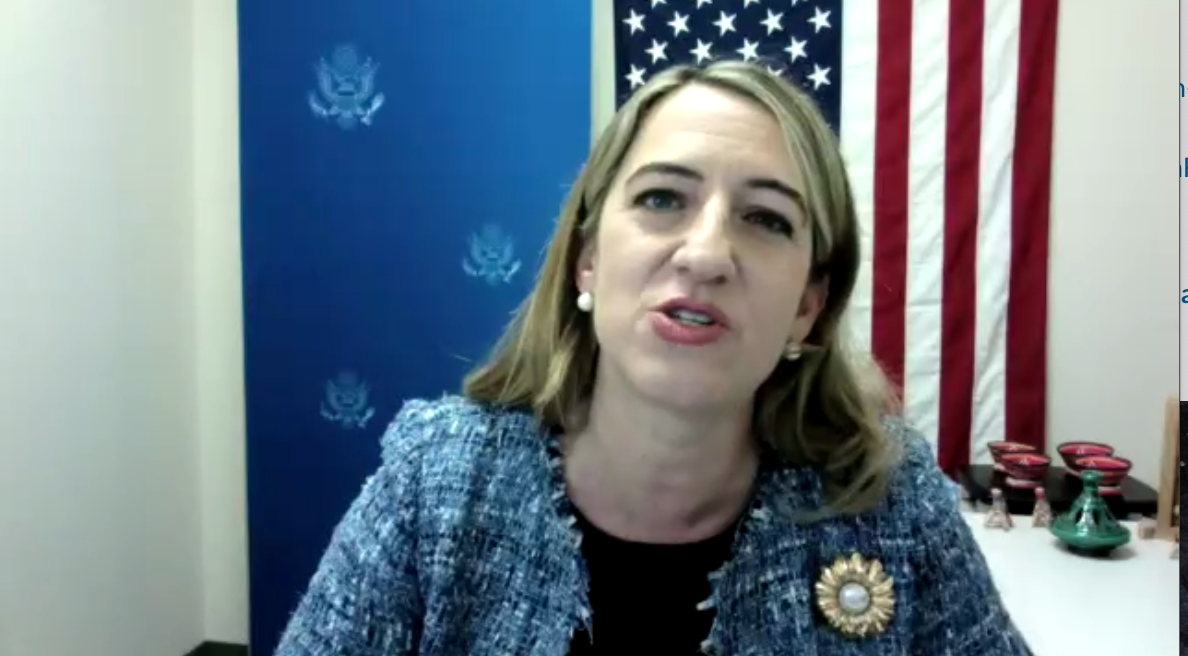 The Biden administration is “working vigorously” on growing the Abraham Accords, which “created the opportunity for nothing short of transformation” in the region, Yael Lempert, the acting assistant secretary of state for Near Eastern affairs, told members of the U.S. Jewish community on Thursday in a pre-Passover Zoom briefing. Her remarks, made an hour before a deadly terror attack in Tel Aviv, touched on the recent wave of terrorist attacks in Israel and the administration’s approach to nuclear negotiations with Iran.

“It’s usually the Sinai Desert that is at the top of mind, but this year, I really hope that what happened two weeks ago in the Negev desert also is discussed around Seder tables, because it was truly history in the making,” Lempert said, referring to the “Negev Summit” that brought together Secretary of State Tony Blinken and the foreign ministers from Israel, the United Arab Emirates, Bahrain, Morocco and Egypt last week. “Being there to witness it was a rare privilege, really inspiring and made me very hopeful about what lies in store in the future.”

Lempert began her briefing by mentioning the recent spate of terrorist attacks throughout the country.

“I want to reiterate the administration’s condolences and outrage over the senseless terrorist attacks in Hadera, Beersheva and Bnei Brak that occurred over the past two weeks, killing 11 innocent people,” Lempert told the nearly 1,000 attendees on the call, which was hosted by White House’s liaison to the Jewish community, Chanan Weissman.

One of the main priorities of Blinken’s recent trip to the region was “urging calm, both with Israel and the Palestinians during his visit to Ramallah, during the confluence of religious and national holidays this month,” Lempert said, noting that the overlapping timing of Ramadan, Passover and Easter “sadly has been a volatile mix historically, in Jerusalem in particular, and we are monitoring the situation closely.”

The Biden administration is “working to prevent actions that raise tensions” and get in the way of a two-state solution, calling for both Israelis and Palestinians to take steps to avoid escalation. “Such actions include incitement to violence and payments to individuals convicted of terrorism, as well as settlement expansion, settler violence and home demolitions,” said Lempert.

She praised the Israeli government for “recent positive steps taken to improve Palestinian lives” and referred to President Joe Biden’s recent signing of a bill that will provide Israel with an additional $1 billion for the Iron Dome missile-defense system.

Lempert, who accompanied Blinken on his recent visit to the Middle East, spoke excitedly about the accomplishments of the Negev Summit, a sentiment she said was echoed by the summit’s attendees.

“Speaking with them while we were there, they were truly excited and seized with the moment and the uniqueness and the history-making aspect of it,” said Lempert, and “and they demonstrate what is possible when countries put aside their differences and build bridges.”

Among the topics discussed at the ministerial meeting, which is set to take place annually, were energy, water, the economy, Iran and the Palestinians.

“We’re really optimistic about this format. We hope that others will join future iterations,” Lempert stated. “I’ve certainly gotten my marching orders from the president and from the secretary of state about our desire to strengthen and deepen and broaden those Accords,” referring to the normalization agreements between Israel and several Arab states.

On Iran, Lempert said the administration is “pursuing the path of meaningful diplomacy” to return to the 2015 Joint Comprehensive Plan of Action, but acknowledged the concerns of some in the Jewish community about those negotiations.

“I understand that perhaps some on this call may have serious doubts about returning to the deal, and I respect that,” said Lempert. “I know the criticism. But our critics haven’t come up with an alternative.”