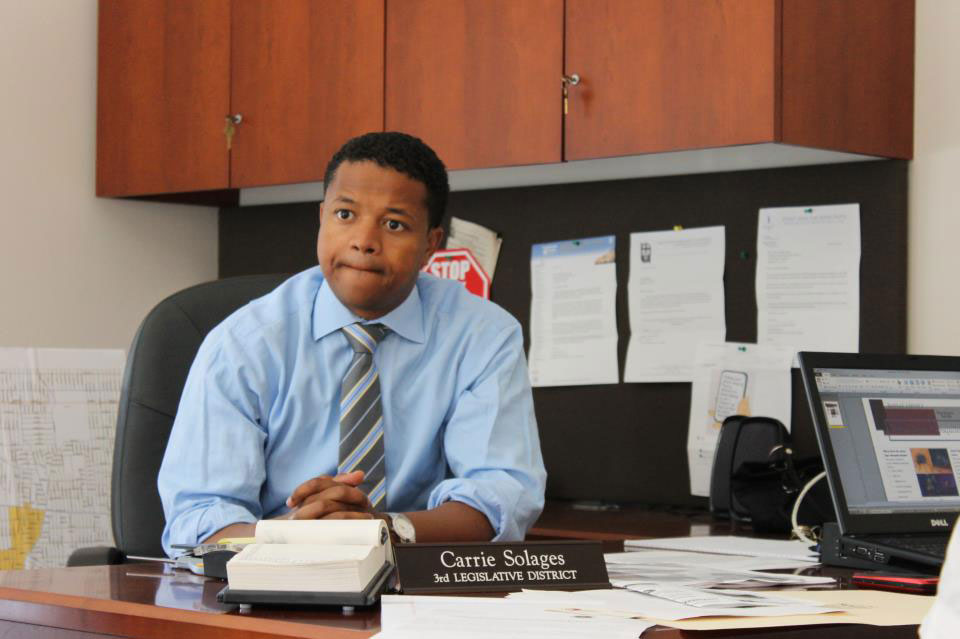 The county legislator is in a wide-open race to succeed Rep. Kathleen Rice

Carrié Solages doesn’t want to be put in a box.

When asked last month about how he describes himself politically, the Nassau County legislator — who is running in the crowded Democratic primary to replace retiring Rep. Kathleen Rice (D-NY) — boasted to Jewish Insider that he is “a Renaissance man that you haven’t seen before in politics.”

But Solages’ basic policy platform is broadly similar to that of many mainstream New York Democrats. While he was one of three county legislators who voted against county-wide police reform measures last year, viewing them as insufficient, he emphasized to JI that he does not support defunding the police and sees public safety as a top concern.

He added that one of his first projects in Congress would be to secure funding for a “virtual wall” on Nassau’s borders with Queens and Suffolk County, to record every license plate coming in and out of the county.

Other priorities, he said, would be raising the State and Local Tax (SALT) deduction “so that homeowners have a shot of living here on a sustainable lifestyle” — a common refrain from New York and New Jersey lawmakers — and lowering property taxes. (Former President Donald Trump capped the SALT deduction, which hit homeowners in blue states in particular with high property taxes.)

Solages, who is in his early 40s, argued that he’s the best-qualified candidate to represent New York’s 4th Congressional District — which includes the heavily Jewish Five Towns area — because of his decade in the county legislature, which has allowed him to build close relationships with state and county officials and given him the knowledge to “deliver for my community.”

The county legislator, who is the U.S.-born child of Haitian immigrants and previously spent time in Washington as an undergraduate at Georgetown University’s School of Foreign Service, said that running for Congress has been a “lifelong dream” inspired by “a lifelong commitment to service for my community.”

Solages’ immigrant background is a driving force behind his concerns about immigration reform, which he described as “overdue.”

“Growing up being called a ‘boat person’ and being accused of having AIDS — that had a big impact on my life and it made me, if anything, love that country, not be ashamed of it,” he said. “Being a child of immigrants made me very sympathetic and sensitive to the needs of immigrants. And when I started to practice law, I did immigration law.”

“I’m concerned about the treatment of Black refugees,” he said. “To see now Haitians being deported left and right — more than under Obama, more than under Trump, in one year —  President Biden has done that, deported more Haitians. And to see him do that — it’s a violation against the Convention Against Torture,” Solages said, referring to the international human rights treaty that went into effect in 1987.

The county legislator also said that the administration’s signature Build Back Better program was not presented well to the public. He said Rice also shoulders part of the blame for that, accusing her of not being “visible and present” in the district.

“I’m not going to Washington, D.C., to be part of the sideshow. I’m going there to deliver for my district,” Solages said. “Her not supporting the speaker — I saw that as a big issue. I saw that that would create problems for her ability to bring back more to the district.”

Rice endorsed one of Solages’ challengers in the race, former Hempstead Town Supervisor Laura Gillen. With Rice’s endorsement, as well as those of former Reps. Steve Israel (D-NY) and Carolyn McCarthy (D-NY), Gillen has been running the “traditional… establishment” campaign according to Ross Wallenstein, a New York political strategist.

“If you base it off of endorsements, then Laura Gillen is clearly a frontrunner. But endorsements, as we all know, don’t always translate to votes,” Wallenstein said. “It doesn’t seem like there’s necessarily a consensus candidate yet… I think that the race is still pretty fluid. It’s still kind of a jumble.”

Solages came in fourth among Democrats in fundraising in the first quarter, trailing Gillen and the two other prominent Democratic competitors, Malverne Mayor Keith Corbett and County Legislator Siela Bynoe.

A recent state Assembly special election in the district, which a Republican candidate won, indicates Democrats could be in for a tough fight in November.

”It seems like Democrats lost parts of that district like Long Beach and Oceanside where they should not have lost,” Wallenstein said. “If I were a Democrat running for Congress in the 4th Congressional, I would be very worried.”

Past accusations of domestic violence accusations could be an “an albatross around [Solages] neck,” Wallenstein added. Solages admitted to disorderly conduct in 2018 after being arrested for allegedly assaulting his son’s mother and endangering her teenage daughter. The woman also accused Solages of other incidents of domestic abuse. He was ordered to complete a domestic violence intervention program and undergo drug testing.

During his undergraduate years at Georgetown, Solages focused primarily on the Caribbean, Haiti and Latin America, but was attending the school in the run-up to 9/11, so the Arab world was another area of interest, he said.

Solages — who aspires to serve on the House Foreign Affairs Committee —  sees “the fact that Iran has been empowered and emboldened” as the major trend in the Middle East since his time at Georgetown.

He said that the Biden administration’s efforts to reenter the Iran nuclear deal go “against what I believe — my inner core — we cannot engage with them.”

“This is a very critical stage in our world history and we have to do everything we can to prevent this domino effect,” Solages said, pointing to a potentially emboldened Iran as a major threat alongside Russia’s invasion of Ukraine and a potential Chinese invasion of Taiwan.

The aspiring congressman said the U.S. should instead keep economic pressure on Iran and continue to provide defense funding to Israel.

“Going back to my days at Georgetown School of Foreign Service, I have always stated publicly, and internally I believe, that we must do everything we can to protect Israel,” he said.

He called for the State Department to work to continue to foster relations between Israel and Arab states, in part to push back Iranian regional influence. Solages has some personal insight into this particular issue: his brother-in-law, who is Jewish, is currently serving as a State Department official in Qatar.

Solages also supports a two-state solution, and said the U.S. has a “humanitarian obligation” to the Palestinains, to ensure that aid continues to flow. “Everyone deserves to have human rights respected. At the same time, [we have to] protect Israel’s status and make sure that it’s recognized as a state,” he said.

Disavowing the Boycott, Divestment and Sanctions movement that targets Israel, Solages characterized a settlement to the Israeli-Palestinian conflict based on pre-1967 borders as unrealistic.

“This movement wants to allow Palestinian people to return their homes and Israel to withdraw from the lands gained from the 1967 Arab-Israeli war,” he said. “It’s not gonna happen, right? That’s like France getting the Louisiana Purchase back.”

At home, Solages, who is a member of the county legislature’s Human Rights Commission, characterized himself as outspoken against antisemitism, which he said is an ongoing threat in the district. He said that a local high school had been tagged with antisemitic graffiti just weeks before he spoke to JI.

“I”ve raised it as an issue as a Human Rights commissioner… I think that we must take a more vocal stand against antisemitism,” he said. “As a Congress member, I’m going to get more funding for our schools so that we can educate our young people that it is unacceptable.”

Solages said he had also witnessed the issue firsthand in his own high school, when classmates mocked his English teacher, who was a Holocaust survivor.

“We need more funding [for] education to teach people about the true history of the Jewish people,” he said. “We have to humanize each other, especially the Jewish people. And we need funding in our schools… to show how antisemitism is purely hate.”

Rabbi Art Vernon, of Congregation Shaaray Shalom in West Hempstead, told JI that Solages has attended Vernon’s synagogue numerous times both as a visitor and to speak to the congregation. Vernon said Solages has always been willing to lend his support when asked about antisemitic incidents.

“Whenever we have wanted to organize on that, Carrié has been there,” he said, adding, “He is a supporter of Israel. He’s called me on a number of occasions about is there anything that we need him to do when there’s some kind of a crisis or something in Israel.”

Solages decried the “rise of certain [Democratic] leaders” who employ “antisemitic rhetoric,” but cloak it within language criticizing Israel.

“They’re swerving around the actual words but they’re attacking Israel and the Jewish people and they’re dehumanizing a human being,” he said. “I think that’s anti-Democratic and antisemitic.”

Solages pledged to speak up against such rhetoric, as well as have discussions with those in his party who engage in it.