Ukraine was at the heart of this year’s Living Legacy conference, attended by high-profile guests from the White House, Foggy Bottom and Capitol Hill 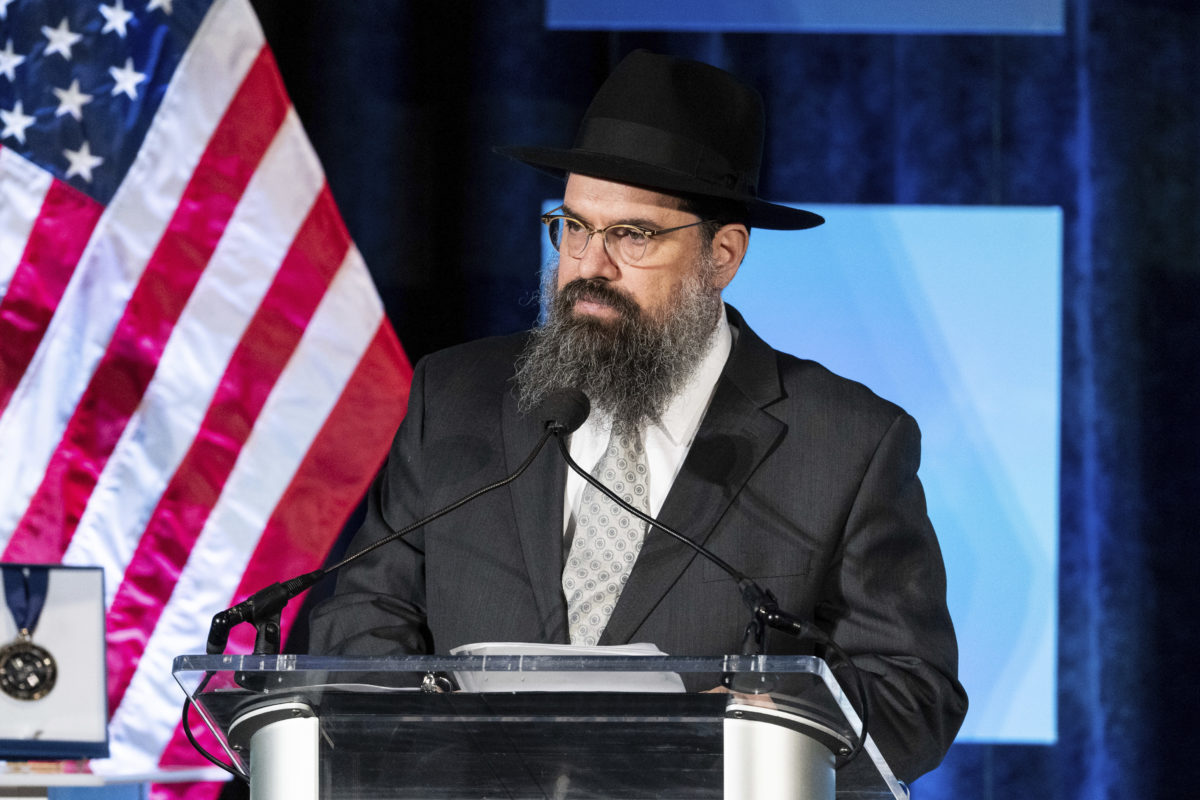 Just days after the Capitol officially reopened to tours, some 250 members of the global Chabad community gathered Wednesday in a stately caucus room in the Russell Senate Office Building to kick off a day-long conference honoring the late Lubavitcher Rebbe Menachem Mendel Schneerson.

The Living Legacy conference, which had not been held in several years due to the COVID-19 pandemic, demonstrated Chabad’s political muscle in Washington and the movement’s global reach, with high-profile appearances from members of Congress, Biden administration officials and foreign ambassadors.

Instead of focusing on a single legislative agenda or policy objective, most speakers throughout the daylong gathering spoke passionately — and, at times, personally — about the crisis in Ukraine, a country that is home to a significant Jewish community and many Chabad emissaries, who have been active in humanitarian efforts in the nation.

“I want, like we all want, peace, quiet, and success,” Rabbi Jonathan Markovitch, the chief rabbi of Kyiv, told attendees at a lunch reception at the St. Regis hotel near the White House. Markovitch and his wife left Kyiv in the early days of the Russian invasion, but returned to help with relief efforts.

For Markovitch and his wife, the conference also presented an opportunity to be reunited with family. Their daughter, Racheli Shemtov, is the rebbetzin at the Chabad at Georgetown University.

“They’re trying to help as much as possible,” Shemtov told Jewish Insider. “It was really, really challenging, because I feel very guilty being in America. Especially the first two weeks, I felt terrible. I kept telling my husband, ‘We need to go back to Ukraine, I can’t be here when all my friends are there and going through this war.’” She called the feeling “survivor’s guilt.”

While the conference provided an emotionally potent meeting ground for Chabad families touched by the violence in Ukraine, it was also a meeting place for Chabad rabbis and supporters from around the world. Rabbis traveled from places including Kazakhstan, Shanghai and Casablanca, with American emissaries from Jewish community hotspots like Florida as well as small communities in Lancaster, Pa., North Dakota and Alaska.

“They come here to gather, to emphasize, to get energized to reinforce the message of the Rebbe,” said Rabbi Levi Shemtov, executive vice president of American Friends of Lubavitch (Chabad). “If we have 100 Jews from Brooklyn coming and doing it, that’s one way of doing it. But when you have people who come from literally 40-something states,” Shemtov told JI, it shows the movement’s reach.

Attendees enjoyed lavish kosher spreads throughout the day. Pastries, bagels, cheese, fruit and multiple varieties of smoked fish were served at a breakfast buffet, with placards on each table advising people what blessing to say over the different breads.

On a bus ride from the Capitol to the lunch reception, excited visitors snapped photos of the cherry blossom trees that were in full bloom next to the Washington Monument. Attendees were advised to visit Lafayette Park outside the White House and the adjacent Black Lives Matter Plaza.

“Not many gatherings have Jan Schakowsky and Madison Cawthorn,” Shemtov said, after both the progressive Illinois Democrat and the conservative North Carolina Republican, under fire this week for recent comments he made about illicit parties in Washington, spoke at the breakfast. Rep. Michelle Steel (R-CA), whose chief of staff is a Chabad member, conversed with the Chabad rabbis from Japan and South Korea — in Japanese and Korean, respectively.

Members of Congress generally avoided politics — Senate Majority Leader Chuck Schumer (D-NY) gave a long speech, peppered with Hebrew and Yiddish phrases, about his many visits to Chabad headquarters in Brooklyn — although a few partisan jabs made their way into speeches. Schumer pointed out that “every single Democrat supported Iron Dome,” while “not every Republican supported it” in the Senate. Sen. Ted Cruz (R-TX) spoke of the House’s struggle to pass a resolution condemning antisemitism following antisemitic comments from some Democratic members, although he didn’t name names. “When that happened it broke my heart,” Cruz said.

The conference was meant to honor the Rebbe’s memory on the year that he would have turned 120 years old, a symbolic age that stems from a verse in Genesis. Speakers throughout the day emphasized his dedication to keeping Judaism alive in the shadow of the Holocaust — a legacy that, many pointed out, has a particularly special meaning given the events currently playing out in Europe.

“Today there are 10,000 Holocaust survivors at risk in Ukraine, some 1,000 in the Donbass region in eastern Ukraine, the most vulnerable,” said Ambassador Stu Eizenstat, a special advisor on Holocaust issues at the State Department. “That Ukrainian Jews have to be on the run or hiding in shelters is unacceptable in the 21st century given what happened in the 20th.”

Natan Sharansky, a Soviet refusenik and the former head of the Jewish Agency, spoke about being inspired by Jewish teachings while he was in a Soviet prison. A rabbi from Berlin rose at dinner to give a powerful speech about his community accepting orphans from Ukraine. Stories were recounted and jokes were told as diplomats from Morocco, Hungary, Turkey and other countries connected with the Chabad emissaries based in those locations.

In a lecture hall at the Library of Congress, Justice Marcus Solomon of the Supreme Court of Western Australia spoke about the separation of church and state. A Chabad-trained rabbi, he argued that the legacy of the Rebbe contradicts the separation between church and state that more mainstream Jewish groups have long supported.

The Rebbe “was a man whose family, community and civilization were annihilated by a continent that exemplified the consequences of the failure to separate church and state,” Solomon said, yet he “saw beyond that to see the divinity within humanity.”

The result is a Jewish movement that celebrates the expression of Judaism in public spaces — a community that has clashed with more mainstream Jewish denominations in lawsuits about the public display of menorahs and other religious objects. The Chabad movement has prevailed in those cases.

“There is simply a duty on each one of us in the public environment in which we find ourselves to demonstrate the compatibility of our public expression of faith with our civic and public lives,” said Solomon.

Former Sen. Joe Lieberman (I-CT) shared the story of his family’s visit to the Rebbe for a blessing on the way to his first time being sworn in for the Senate in 1989. “‘Don’t be discouraged if things don’t go your way. Remember, you have a purpose, you have a destiny that comes from Torah,’” he recalled the Rebbe saying.

After a packed day of meetings, speakers and meals, the crowd rejoiced one last time: The final act, the main event, was the Hasidic singer Avraham Fried singing the Rebbe’s favorite tunes as attendees danced into the night.