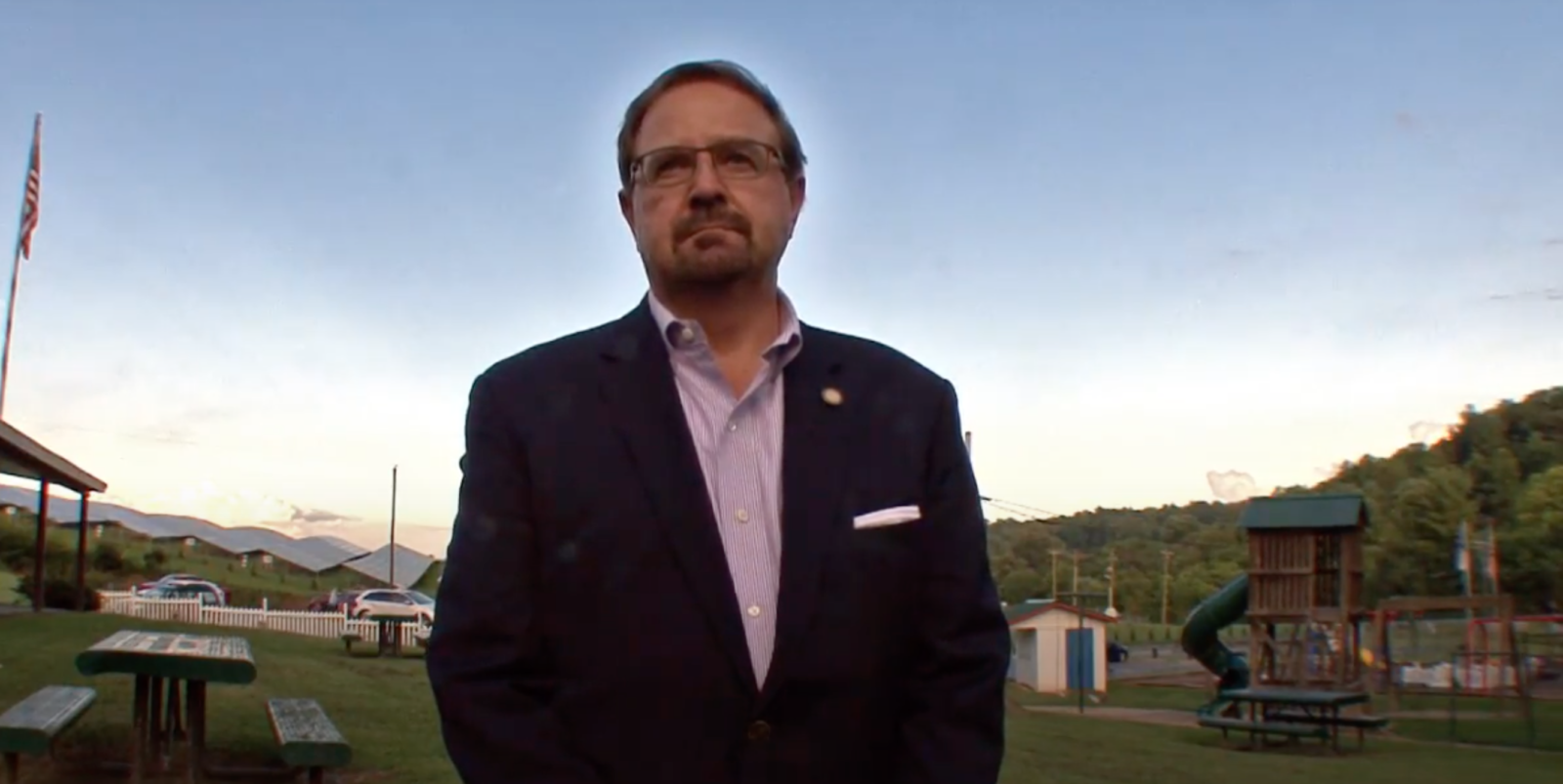 Chuck Edwards walks a fine line in challenge to Cawthorn

Chuck Edwards, a Republican state senator in Western North Carolina, readily acknowledges that he once had high hopes for Rep. Madison Cawthorn (R-NC), the freshman congressman who emerged from relative obscurity last election cycle to become the youngest House member in at least several decades.

“I had supported Congressman Cawthorn,” Edwards, 61, said in a recent interview with Jewish Insider. “I had introduced him to friends. I had made contributions to his campaign. And I wanted to see him be successful.”

But Edwards says he has now lost faith in Cawthorn’s ability to govern now that he is mounting a primary challenge against the 26-year-old GOP firebrand in North Carolina’s newly drawn 11th Congressional District.

“I feel that Western North Carolina can do better,” Edwards said of Cawthorn, who has almost continuously drawn controversy for his extreme right-wing rhetoric since he assumed office in 2021, most recently for comments in which he called Ukrainian President Volodymyr Zelensky a “thug,” drawing sharp rebukes from fellow party members. “Right now, the U.S. House floor is not a training camp for folks to learn how to lead legislatively.”

Edwards has been a vocal critic of Cawthorn’s behavior since the Capitol riot last year, when he accused the first-term Republican of “inflaming” political tensions and, in a subsequent statement, said he was “extremely concerned” with “Cawthorn’s conduct” after the congressman was caught on tape encouraging supporters to “lightly threaten” House members in an effort to overturn the presidential election results.

Despite such attacks, Edwards had not necessarily expected to find himself taking on a sitting member of Congress when he announced his House bid last November, just weeks after Cawthorn filed to run in a district to the east. In late February, Cawthorn returned to the 11th following a final round of redistricting.

His about-face set up what is expected to be a heated intraparty primary battle as the congressman squares off against a crowded field of Republican challengers in the deeply conservative district.

Edwards, viewed as one of the most viable contenders competing in the May primary, is among more than a half-dozen Republican challengers, including hotel manager Bruce O’Connell, Navy veteran Wendy Nevarez and former GOP district chair Michele Woodhouse, who has castigated Cawthorn as a “broken-promises politician.”

But even as Edwards expressed similar dissatisfaction with Cawthorn in conversation with JI, he was, for the most part, relatively cautious while assessing the congressman’s tumultuous first year in office. “I want to stay focused on what my campaign is about,” Edwards said, “and allow the voters to compare Congressman Cawthorn’s record to my record.”

Such hedging underscores the unique balancing act Edwards now finds himself navigating as he goes up against Cawthorn, who is among the most high-profile Republicans in the country and, notwithstanding recent admonishments from his colleagues in the House and Senate, appears to remain popular with the Trump wing of the party.

“He’s got a fine line to walk,” Chris Cooper, a professor of political science at Western Carolina University who specializes in local elections, said of Edwards. “He needs to demonstrate that Cawthorn is not the right candidate but simultaneously not alienate the people who just voted for Cawthorn. I think it’s tough.”

Not that Edwards has been pulling his punches entirely. “If you’re paying attention,” Cooper told JI, “it is clear that he thinks Madison Cawthorn’s actions are not appropriate for a member of Congress.”

In recent months, Edwards has put forth a litany of statements that have functioned as veiled criticisms of Cawthorn’s behavior. He has, for instance, declared his support for “the brave people of Ukraine” while calling Russian President Vladimir Putin a “thug,” and, in his first campaign ad earlier this month, emphasized what he described as his “mountain values” — an implicit jab at Cawthorn’s recent gambit to switch districts.

“I was extremely surprised when he left this district,” Edwards told JI, without casting direct judgment on Cawthorn’s decision. “And then I was even more surprised to see that he had changed his mind and decided to come back.”

Edwards steered clear, however, of criticizing former President Donald Trump. “I always appreciated President Trump’s frankness, his love of this country and his unwavering support for policies that put America first,” Edwards said. “We all have our own style, and I believe we have to be true to ourselves in utilizing that style to get the work of the people done.”

Either way, Edwards indicated that he was in no rush to notch an endorsement from Trump, who has previously expressed his support for Cawthorn but has yet to officially weigh in on the primary. “I’m seeking the endorsement of the people of these mountains,” Edwards declared. “That’s the only endorsement that’s important to me.

While Edwards casts himself as an even-tempered alternative to the brash incumbent, he and Cawthorn are largely aligned on policy, including on immigration, budget matters and the Middle East.

“We’ve got an open border to our south, we’ve got runaway debt, the folks in D.C. are spending money like drunken sailors, and there seems to be no discipline, or no will, to bring that under control,” Edwards told JI, adding that inflation is “spiraling out of control” and a “declining economy” is imperiling “our national security.”

Edwards suggested that his experience as a state legislator, as well as a businessman, makes him a more qualified candidate than Cawthorn. The North Carolina native, who has served in the state Senate since 2016, lives in Hendersonville, where Cawthorn also resides, and is the owner of six McDonald’s franchises throughout the district.

“We need solid, business-minded people like myself with conservative principles, with a history of getting things done, to address the problems of today,” he said. “I know what it takes to make a difference in government.”

But Edwards was somewhat less well-versed on foreign policy. While he touted his support for Israel and described the Boycott, Divestment and Sanctions movement as antisemitic, he was unclear on the details of the Iran nuclear deal that Trump abandoned in 2018.

“I’ve been involved in state politics for the last six years,” Edwards said, adding that he was “not familiar with the details” of the Biden administration’s efforts to renegotiate a nuclear agreement with Iran. “What I can say is that we need to stand strong and insist that Iran not be able to advance their nuclear technology.”

Asked if he was referring to Cawthorn, Edwards demurred. “I would just reiterate the same statement that I made,” he said.

In the interview with JI, Edwards emphasized that he would “stand up against antisemitism” if he is elected to the House, noting that he had already taken such action as a state senator by supporting a bill that was signed into law last year and mandates that public schools in North Carolina teach students between grades seven and 12 about the Holocaust.

“We’ve got to continue to educate America’s youth on the history of antisemitism, Israel and the Jewish people,” Edwards said. “I’m committed to stand up to antisemitism wherever I see it. I believe that it is every leader’s responsibility to stamp out racism in any form.”

Cawthorn, for his part, introduced a House resolution last July condemning the uptick in antisemitic violence that followed the conflict between Israel and Hamas.

But his relationship with Jewish constituents in the district has been somewhat strained since he assumed office, thanks in part to an old Instagram post in which he appeared to glorify Adolf Hitler, whom he described as “the Führer,” during a visit to the Eagle’s Nest, the site that once served as Hitler’s mountain chalet.

Before he took office, Cawthorn drew further scrutiny when he admitted, in an interview with JI, that he had tried to convert Jews to Christianity. Weeks after being sworn in, the congressman also invoked a poem about the Holocaust while hawking campaign merchandise on Twitter.

Last February, Cawthorn met with Jewish leaders in the district, which includes the liberal redoubt of Asheville, to address their concerns.

A spokesperson for Cawthorn’s campaign did not respond to a request for comment from JI.

In a statement in late February, Cawthorn said he was “excited to run for reelection in North Carolina’s newly solidified 11th congressional district and represent nearly all of my current constituents in the 118th Congress,” adding: “Western North Carolinians want a fighter in Congress. With their support, I look forward to returning to Washington as a sophomore member and helping enact major change with a historic Republican majority.”

With no publicly available polling, the race remains difficult to parse, though experts have suggested that Cawthorn will be tough to beat, even if the race advances to a runoff should no candidate secure more than 30% of the vote in the May primary.

Still, a Republican fundraiser who supports Edwards told JI that the state senator is strongly positioned to pull off an upset.

According to the latest filings from the Federal Election Commission, Edwards began the new year with nearly $330,000 on hand, $250,000 of which he personally loaned his campaign. The cash infusion has put him ahead of Cawthorn, a prolific fundraiser who has pulled in nearly $2.9 million since the beginning of 2021 but nevertheless entered the new year with just over $280,000.

“Cawthorn is broke,” said the fundraiser, who requested anonymity to speak freely. “Edwards is a fundraising machine and I am seeing a major uptick in donor interest now that the district lines have finally been resolved.”

Edwards, for his part, said his campaign is “picking up momentum” with two months remaining until the primary. “The people of Western North Carolina recognize the need to have someone with accomplished conservative principles representing them in office,” he told JI, “and they have been very generous and willing to step up with their time and resources to help me get elected.”

“My interest in running for Congress is to serve the people of Western North Carolina, the people that I love and adore, the people of which I am one, the mountains that I love, and the communities that have so blessed me and my family,” Edwards said. “I’m not looking to further a political career or to build a social media following.”

“I can tell you,” he emphasized, “that I have absolutely no desire to visit the Eagle’s Nest.”