Harris, Blinken, Gantz among the VIPs gathering in Munich this weekend

The annual Munich Security Conference kicked off today, bringing international influential figures together for a weekend of discussion 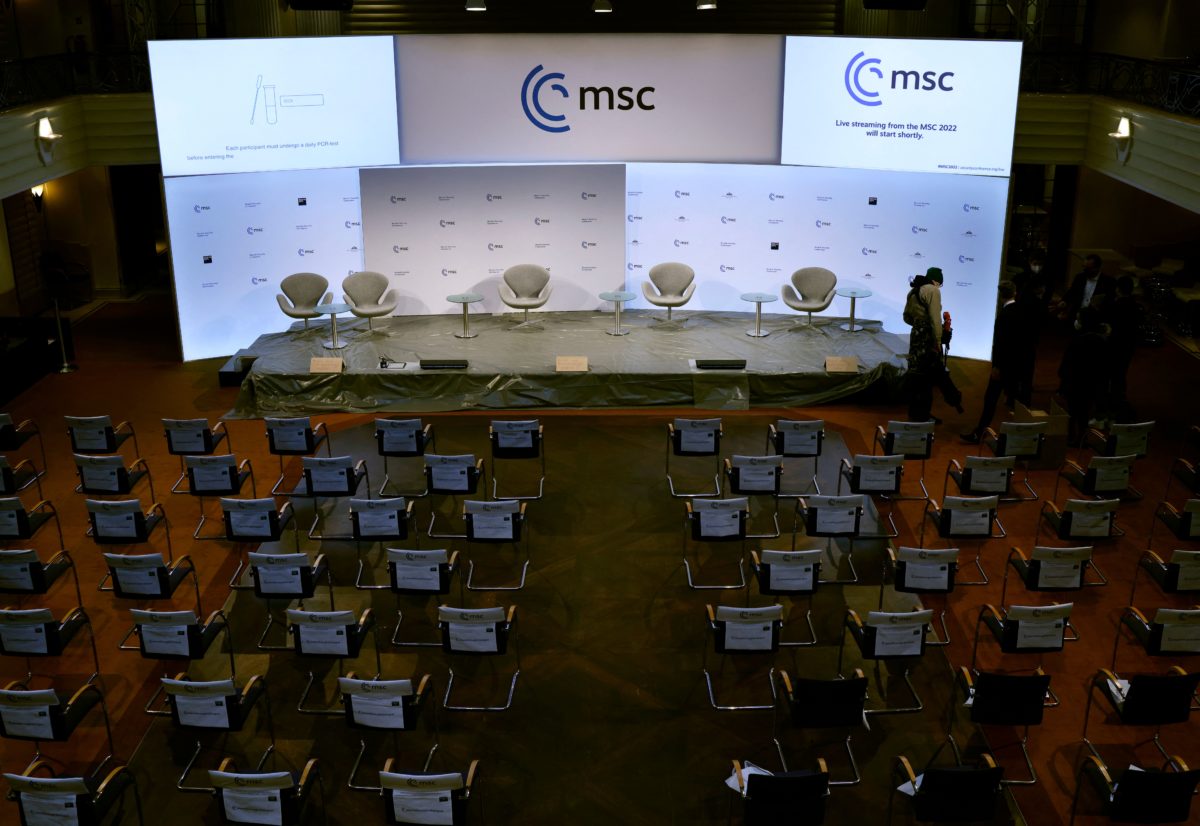 A general view shows chairs and the podium of the 58th Munich Security Conference MSC at the venue Hotel Bayerischer Hof in Munich, southern Germany

Described as the “granddaddy of international conferences,” by Hudson Institute fellow Kenneth Weinstein, the Munich gathering has, since 1963, drawn world leaders in politics and business annually for a weekend of discussions and meetings.

This year’s conference, hosted by German diplomat Wolfgang Ischinger, who previously served as Berlin’s envoy to the U.S., marks a return to in-person programming after last year’s virtual conference, and will cut back on invitees to minimize the risk of COVID-19 spread. The three-day gathering occurs against a backdrop of a looming Russian invasion of Ukraine, a topic that is expected to be a focus at the conference.

Along with Harris, who is slated to speak at a session titled “The U.S. on the World Stage,” the U.S. delegation also includes Secretary of State Tony Blinken and several dozen members of Congress.

The venue has traditionally been a place for American vice presidents to rub shoulders with their international peers. “This is [Harris’s] debut in a big way on the big international stage,” explained Weinstein.

In a statement, Coons called the event a “‘marketplace of ideas’ where initiatives and solutions are developed and opinions are exchanged.”

Israeli Defense Minister Benny Gantz is expected to attend the Munich meeting, where he will speak about the Abraham Accords on a panel alongside Emirati and Bahraini government officials.

Iran will send a delegation from its new hardline government. “In the past we’ve been used to [former Iranian Foreign Minister Mohammad Javad] Zarif coming in and blowing us over with his rhetorical excesses and somersaults,” explained Weinstein. “Zarif engages in such sophistry and is so talented at it that people are taken by his call for engagement, when that’s everything the regime is totally against.”

Iranian Foreign Minister Hossein Amir Abdollahian will speak at a session about the future of the 2015 Iran nuclear deal, whose reinstatement is the subject of ongoing negotiations in Vienna.

Despite reports that a decision about reviving the nuclear deal with Iran is days away, Weinstein suspects that the final word will not be announced until after the conference, given that Israel could register its objection to reentering the deal at the conference.

The Munich conference will also see the foreign ministers of Qatar and Saudi Arabia appear together on a panel titled “New Friends, Old Frictions: Rapprochement and Rupture in the Middle East.”