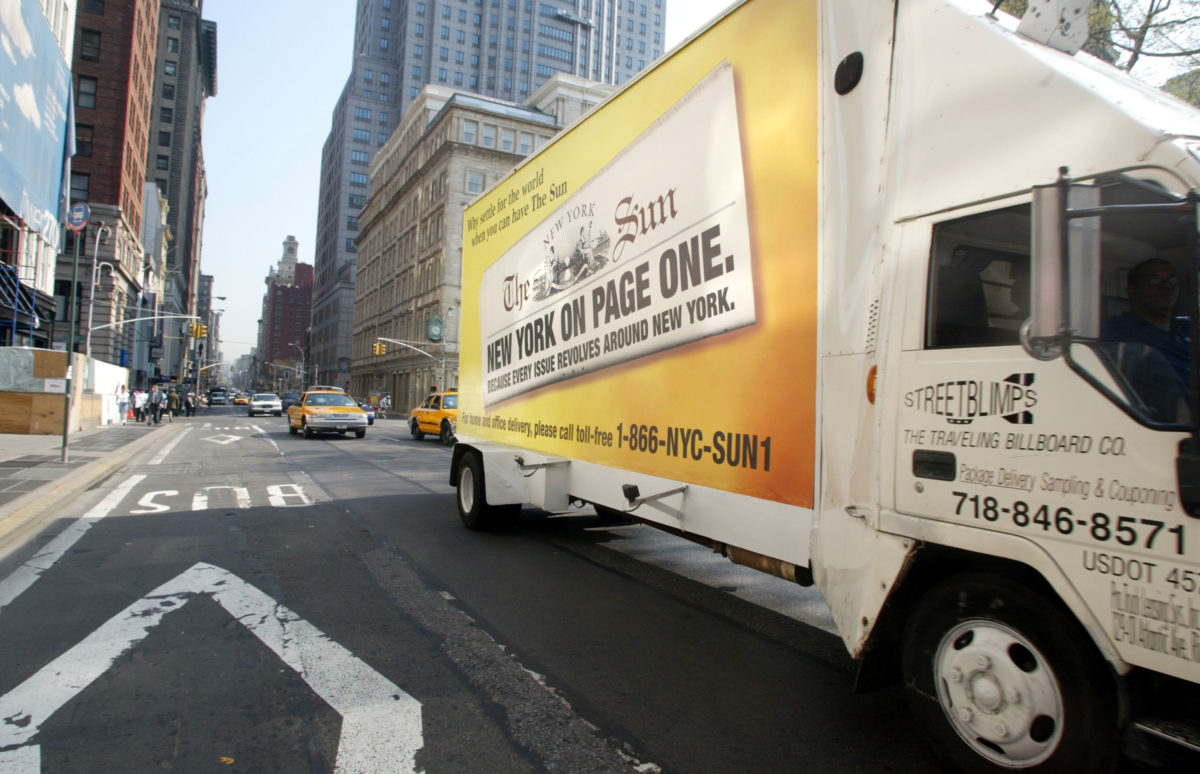 An advertising truck heralds the debut of The New York Sun on April 16, 2002, in New York City.

“The Sun eschews cynicism,” Dovid Efune, the publisher, wrote in a mission statement announcing the paper’s revival. “We prefer the teaching of Rabbi Menachem Schneerson, that darkness is best countered with light, falsehood with truth.”

The hallowed reference to the late Lubavitcher rebbe, who was among the most influential Orthodox Jewish leaders of the 20th century, may seem unusual for a newspaper like the Sun, which was first published in 1833 and is probably best known for its “Yes, Virginia, there is a Santa Claus” editorial.

But Efune suggested that the publication’s emphasis on Jewish values was in keeping both with his own experience as the former top editor and chief executive of a Jewish newspaper in New York City, The Algemeiner, as well as a broader conviction — put forth in his announcement — that the Sun has been “on the right side of history at most every critical juncture.”

For the new publisher, that includes a fierce dedication to Jewish causes. “The Sun is a general-interest paper, but it’s also a Zionist newspaper,” Efune, who is in his mid-30s and still holds a seat on Algemeiner’s executive board, explained in an email exchange with Jewish Insider this week. “The cause of the Jewish people and the Jewish state,” he said, “is a cause that the Sun is steadfastly committed to.”

On such issues, the Sun is carving out a unique path for itself among mainstream media companies in the United States, even if it is consonant with a viewpoint that guided its previous run from 2002 to 2008. In Europe, a similar ethos can be found at the German publishing giant Axel Springer, which is committed to a list of core principles including, among other so-called “essentials,” support for “the Jewish people and the right of existence of the State of Israel.”

The Sun, however, possesses what might be characterized as a distinctly yiddishe kop, not least because its 76-year-old editor, Seth Lipsky, is a veteran newspaperman with valuable experience at the intersection of Jewish and mainstream journalism.

More than 30 years ago, Lipsky left behind a distinguished run at The Wall Street Journal to found the English-language edition of what was then known as The Jewish Daily Forward, where he helped launch the careers of budding luminaries like Ben Smith, Jeffrey Goldberg, Jonathan Mahler and Philip Gourevitch. Lipsky then served for six years as the founding editor of an earlier version of the Sun before its untimely demise in the late aughts. He has since been without a fully staffed newspaper.

Lipsky, an eccentric editor who is remembered by former employees for his unusual if amusingly anachronistic professional advice — such as encouraging reporters to smoke cigarettes and wear fedoras — is now steering a newsroom for the first time in nearly 15 years.

He gave up smoking decades ago and appears hatless in publicly available photos. But Lipsky’s long-standing commitment to the old-fashioned art of newspapering — combined with a passion for Jewish issues that has animated much of his work — remains core to a sui generis approach that he likes to describe, somewhat prophetically, as editing “in the light of Sinai.”

But while Lipsky could plausibly count himself among the most quietly influential New York editors of the past three decades or so — his former charges have gone on to lead such publications as BuzzFeed, The Atlantic and The Paris Review — he is now poised to find out if his vision will catch on as he takes another shot at sustaining the Sun.

Efune, who bought the Sun from Lipsky in an undisclosed cash and stock deal last November, expressed confidence that the paper will be capable of navigating an increasingly contracting media ecosystem that has seen many publications come and go in recent years. Perhaps most notably, he has set an ambitious goal of positioning the paper as a serious alternative to The New York Times, which recently reached 10 million subscriptions.

“Our sense is that there are many times more Americans who would like to see a meaningful alternative, and are willing to participate in building it,” Efune explained. “That’s a role that the Sun is uniquely positioned to play. It’s a New York broadsheet with a similar focus on politics and culture. It’s won Pulitzer Prizes and shares nearly 200 years of history. In fact, the Sun was founded 18 years before the Times.”

As the Sun enters its third act, Efune suggested that the paper would bring a crusading spirit to its news and opinion pages, invoking a description from the late 1800s, when the paper was favorably described as “hard hitting from the shoulder on proper occasions.”

The new paper “will have very much in common with the previous iterations of the Sun, going back to 1833,” Efune said. Its specialty, he added, “has long been in its ability to build a connection with its readers and the American public. It’s that reciprocity that’s now grossly lacking. It’s why we believe that the Sun is a newspaper for this very moment.”

“Today, there are many consequential stories that are ignored or sidelined, and many substantially unimportant stories that dominate headlines,” Efune elaborated. “We’ll be prioritizing stories that are of interest and consequence to everyday Americans, and, on our editorial pages, addressing the questions that most impact our future as a country.”

That list is in many ways reminiscent of Lipsky’s editorial template when he launched what was then the second iteration of the Sun following his resignation from the Forward amid mounting tensions over his right-wing political leanings.

Soon after his departure, Lipsky secured funding from a group of conservative backers who were receptive to his plan for reviving the storied print newspaper that had gone out of circulation as a standalone publication after merging with the now-defunct New York World-Telegram in 1950.

The center-right paper was also known for its in-depth reporting on antisemitism as well as a fiercely pro-Israel outlook that occasionally drew the ire of left-wing critics. The Nation, for instance, accused the Sun of functioning “as a journalistic SWAT team against individuals and institutions seen as hostile to Israel and Jews,” even as it praised the culture pages as a “fabulous read.”

Others appreciated the sense of urgency and attention that the Sun often brought to bear on Jewish community issues. Shortly before the Sun ceased publication, The New York Jewish Week praised the broadsheet as “one of the few places in the daily media where Judaism and Christianity were treated fairly, favorably even.”

The Sun shuttered at the height of the Great Recession without having made a profit. In the ensuing years, Lipsky continued to publish a steady trickle of unsigned editorials and other columns on the Sun’s website but otherwise sat alone atop the masthead. He did not respond to an interview request from JI this week.

Efune said he was “actively considering” publishing a print version of the newspaper, but clarified that there were no immediate plans to do so at a daily rate. “Possibly on weekends to start,” he told JI.

The Sun is now offering a few membership plans that will allow for tiered levels of financial commitment, the most affordable option of which is a $120 annual subscription for unlimited articles and access to the comments section. For $250 a year, readers receive additional access to podcasts and other exclusive events as well as the Sun’s original crossword puzzles, edited by the ace cruciverbalist Peter Gordon.

The “founder” membership plan, which costs $2,500, includes a variety of enticements, such as “weekly briefings from senior editorial staff” and “limited-edition signed memorabilia,” according to the website.

The paper now employs approximately 30 staffers, “including some part-timers,” according to Efune. “Of course, the strength of any newspaper is in the hearts and minds of its editors and journalists,” he said, noting that the staff was assembled by Lipsky and Caroline Vik, the paper’s associate editor.

Lipsky isn’t the only familiar face at the relaunched Sun. Ira Stoll, the paper’s former managing editor, is a columnist, and John Seeley, who worked at the Sun as a deputy under Stoll, has returned as a news editor. Benny Avni, the Sun’s former U.N. reporter, is now chief foreign correspondent.

The wide-ranging masthead suggests a continuity with the heterodox Sun of the 2000s, situating such loudly right-wing columnists as Larry Kudlow and Conrad Black alongside a poetry editor, book and movie critics and correspondents in Berlin and Asia, among other places.

“We’re modest and realistic about what it will take, but we have a vision and we’re in it for the long haul,” Efune told JI on the day of the launch this week, punctuating his assessment with a somewhat idealistic declaration. “We’re building a newspaper, but also a movement.”