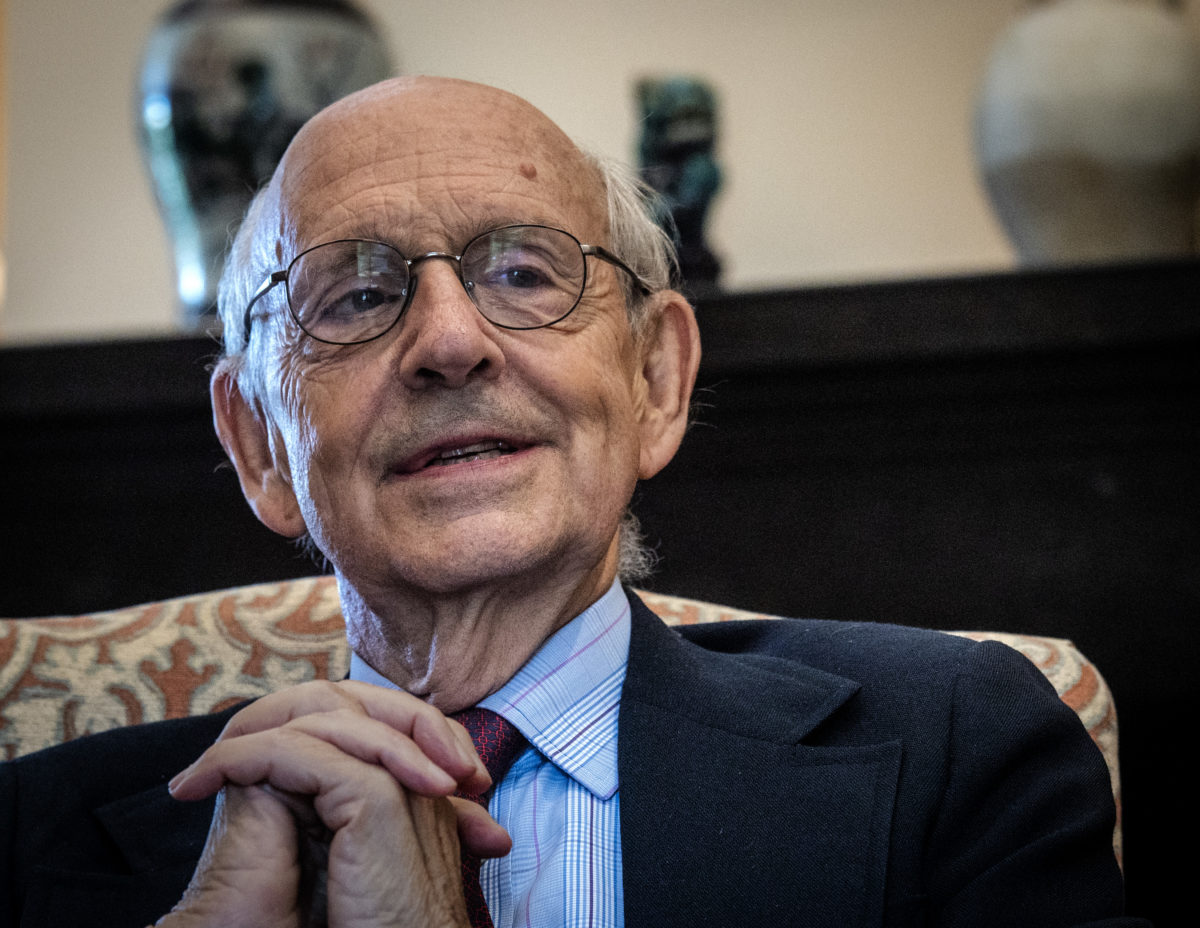 Supreme Court Justice Stephen Breyer during our interview in his office, in Washington, D.C.

Following news reports on Wednesday that Supreme Court Justice Stephen Breyer plans to retire at the end of this term, Court watchers and political activists have begun to speculate about whom President Joe Biden will choose to replace Breyer. The associate justice, 83, who was nominated by President Bill Clinton in 1994, will have served nearly 28 years on the nation’s highest court.

During his campaign, Biden pledged to nominate a Black woman to the Supreme Court. One jurist Biden is reportedly considering is California Supreme Court Justice Leondra Kruger, who has Jewish and Jamaican roots.

Breyer’s seat on the Court was once routinely, if unofficially, called the “Jewish seat,” because five of the last six justices to fill that seat were Jewish. After Louis Brandeis’ nomination to the Court in 1916, he was the sole Jew until President Herbert Hoover appointed Benjamin N. Cardozo in 1932.

Brandeis retired in 1939, leaving Cardozo as the only Jewish justice. Future Jewish justices would go on to occupy Cardozo’s seat — he was succeeded by Felix Frankfurter, Arthur Goldberg and Abe Fortas. When Fortas left the Court in 1969 over an ethics scandal, he was replaced by Henry Blackmun, a Methodist, and the “Jewish seat” disappeared. But not forever.

The next Jewish justice named was Ruth Bader Ginsburg, in 1993, who did not fill the “Jewish seat.” That went to Breyer, a year later, when Blackmun retired. “No one saw us as filling a Jewish seat,” Ginsburg said in a 2003 speech.

Breyer told the writer Abigail Pogrebin in 2005 that he was “a little surprised” that his Jewish faith did not come up in his confirmation hearings. “If you told my grandfather that there would be two Jews on the Supreme Court at the same time and nobody would make an issue of that, he would have found that to be impossible.” Nearly 80 years before Breyer joined the Court, Brandeis’s confirmation hearings were tinged with antisemitism.

Breyer often speaks to Jewish audiences, although he has spoken less frequently about his Jewish faith and upbringing than other Jewish justices. He told Pogrebin that his Hebrew school and Jewish summer camp experiences “made an impression,” and that he views the world like his father did: “My favorite way of looking at things is what Hillel said: ‘If I am not for myself who will be for me? If I am only for myself, what am I? If not now, when?’ That captures it to me.”

It is that saying, Breyer explained, that guides his basic understanding of the law, even if his Jewish faith and education do not shape his legal decisions. “The heritage of law in this country is to make people’s lives better, to make certain there’s a reasonable level of social equality, to make certain people’s basic freedoms are guaranteed,” he said. “Everyone who is a judge in the United States traces that back to the founding of this nation, and the Jews are immediately aware that it goes far further back than that.”

Breyer’s talks to Jewish audiences have focused on religion and law, such as a 2006 conversation at Georgetown’s Kesher Israel Congregation where Breyer spoke about his views on the separation between church and state. He was also a regular at Jewish events in Washington — the liberal justice attended former President Donald Trump’s first White House Hanukkah party in 2017. Earlier that year, he spoke at the U.K. Embassy at an event marking 100 years since the Balfour Declaration.

In 2014, he and Kagan spoke at The Jewish Federations of North America’s General Assembly. Breyer spoke of learning about “social justice” at Temple Emanu-El in San Francisco, the Reform synagogue where he had a bar mitzvah.

“I think of tzedakah, and it’s related to tzedek [Hebrew for ‘justice’] — and it’s not quite pure charity, like giving through love, and it’s not quite rule of law either. But it is trying to create a better world,” Breyer told the audience. “I say, ‘Justice, justice, justice shall you pursue’ — the word that suddenly strikes a bill with me is the word ‘you,’ because it’s not referring to judges alone, nor to lawyers alone. It’s referring to everyone.”

Breyer grew up in San Francisco in a middle-class Jewish family with roots in Romania, whose Jewish history Breyer is reportedly actively exploring. He and his wife, Joanna, the daughter of a British aristocrat, raised an interfaith family. Their daughter Chloe is an Episcopal priest.

Upon joining the Court, Breyer and Ginsburg together asked then-Chief Justice William Rehnquist to reschedule a case that was originally supposed to be heard on the High Holidays.

“The argument that was utterly convincing for the chief was that in an argument, there will inevitably be Jewish lawyers,” Ginsburg said in a 2018 speech. “Do you want to take away from them the opportunity to present their case? And that resonated. So now we don’t sit on the High Holy Days.”

When Breyer got the call that Ginsburg had died from pancreatic cancer, he was watching a virtual Rosh Hashanah service with his daughter and grandchildren.

“I was looking at it on Zoom, the service, and they were at the Kaddish. Right there,” Breyer said at a 2021 event with the Museum of Jewish Heritage in New York. “She had been quite sick, and it wasn’t unexpected, but still I was moved. And I said, ‘a woman of valor, a great judge, and a good friend,’” referring to the Jewish song “Eshet Chayil,” Hebrew for “woman of valor.”

Breyer has been known to follow and refer to Israeli Supreme Court decisions or other aspects of Israeli law. He attended the Brookings Institution’s Saban Forum — the annual gathering of Washington and Israeli insiders — each year, and once participated in a panel with Israeli Supreme Court justices.

“He was very involved in our conversations and a very good conversationalist,” said Natan Sachs, director of the Center for Middle East Policy at the Brookings Institution. Breyer was also very interested in Israel “and its democratic character.” When the Saban Forum took place in Jerusalem in 2009, Breyer flew overseas for the event. It was his first trip to Israel.