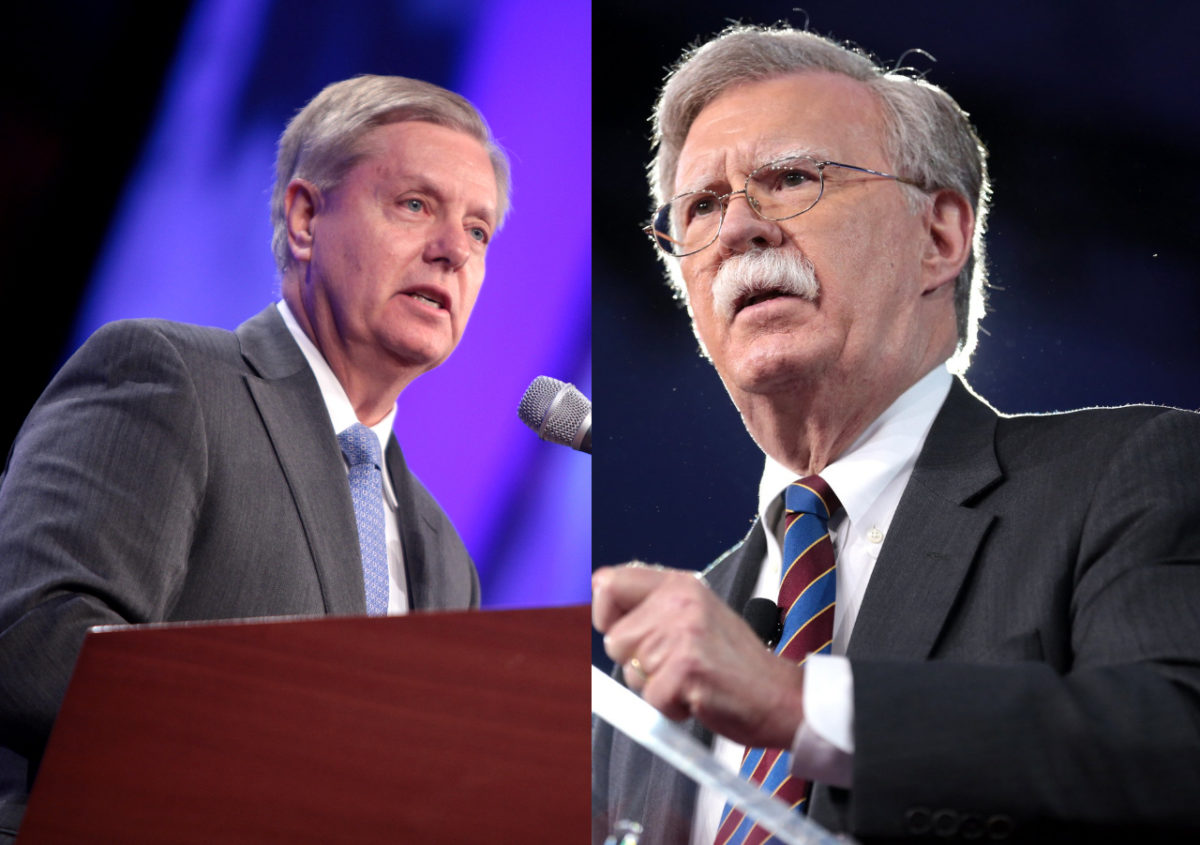 Graham, a close ally of former President Donald Trump, said the Trump administration consistently failed to provide an explanation of its ultimate end goal for Iran.

Bolton said during a separate panel discussion that the administration executed a “less than perfect performance” in the maximum pressure campaign.

“There was much more we could have done,” Bolton said. “I won’t get into all the internal reasons here. But not everybody was onboard with a real maximum pressure campaign. Notwithstanding that, the effective use, nearly, of U.S. unilateral sanctions had a devastating effect on Iran’s economy.”

Graham’s panel also included Sen. Bob Menendez (D-NJ), with whom Graham has proposed an alternative to the 2015 nuclear agreement involving a regional nuclear fuel bank, an attempt to permanently stop Iranian domestic enrichment and prevent an arms race in the region.

Both senators agreed that the JCPOA is insufficient at preventing Iran from developing a nuclear weapon, and said that diplomatic options for dealing with Iran are running short.

“The only other Plan B, short of having another diplomatic initiative such as the one Sen. Graham and I are suggesting, is either a comprehensive multilateral sanction regime that would move quickly that our allies have not been willing to [agree to],” Menendez said. “And/or you have to think about how else to stop this program from marching forward? And I think there are very few options left after that.”

Menendez added that, given recent attacks against Iranian nuclear facilities, the Iranians know that “their path forward is not without consequence,” but argued that such actions are not a sufficient solution alone.

“I think they have to already in their mind be pretty clear that in the absence of any diplomatic engagement, that there will be a consequence to their program,” Menendez said. Of course, the problem with the consequences to their programs is it sets it back, but it doesn’t end it. And that’s the fundamental challenge of it.”

“We need to do two things to the Iranians: make real the possibility of a military engagement, which they will lose, and give them an opportunity to have nuclear power without enrichment… and let them choose which way they want to go pretty quickly,” he said. “If they go down this [current] path, Israel eventually has to do something. This is unsustainable.”

He added that pressure on the Iranian regime will be critical.

“If you could convince the Iranians the regime will do better without a nuclear weapon… then they won’t have one,” Graham said. “That means you have to put the regime’s survival at stake if they continue to go down this road.”

“We will not tire. We will be relentless,” Bennett said. “Because when we’re talking about the very existence of the Jewish state, we will do what we need to do.”

Sen. Ben Cardin (D-MD), another critic of the 2015 deal, participated in a separate panel discussion on Thursday. He lamented the “tunnel vision” that he characterized as plaguing the State Department bureaucracy, which he said has led officials to exclude other important issues, such as human rights, in negotiations with Iran.

“They look for an avenue to complete their assignment as quickly as possible. They want to simplify the issues. They want to make these issues as simple as possible,” he said. “If you’re going into a discussion or a [bilateral meeting] you try to say, ‘Let’s get one issue resolved and leave the other issues alone.’”

He added that he has told State Department officials that any deal with Tehran should have no sunsets on provisions relating to Iran’s nuclear program and should also address non-nuclear malign activities.

Former U.S. ambassador to the U.N. Nikki Haley, a potential 2024 presidential candidate who spoke at a separate panel on Thursday, advised Israel not to rely on the Biden administration to support it against Iran.

“I would say don’t count on the Biden administration to help you with Iran, because I don’t think they’re going to be there,” she said.

Bolton also said that he believes the Trump administration would have executed the Afghanistan withdrawal in much the same way that the Biden administration did.

The withdrawal, he suggested, “will have enormous ramifications for the United States globally, almost all of the bad, but particularly with respect to Iran.”

Bolton called the Biden administration’s efforts to pivot away from the Middle East to focus on China an “infantile understanding of foreign affairs,” noting that China is seeking to grow its own influence in Iran and throughout the Middle East.

During her panel, Haley also accused President Joe Biden of driving Saudi Arabia toward Iran by both distancing himself from Riyadh over its human rights violations and seeking to return to the JCPOA.

“Refusing to meet with the crown prince in Saudi Arabia [earlier this year] — that was a terrible strategic mistake,” Haley said. “Regardless of what Biden’s views were on Saudi Arabia, that’s a partner we need to have in defeating terrorism. So once that happens, you’ve sent Saudi Arabia into the arms of Iran. The idea that they’re actually having conversations and negotiations was unthinkable a couple of years ago.”