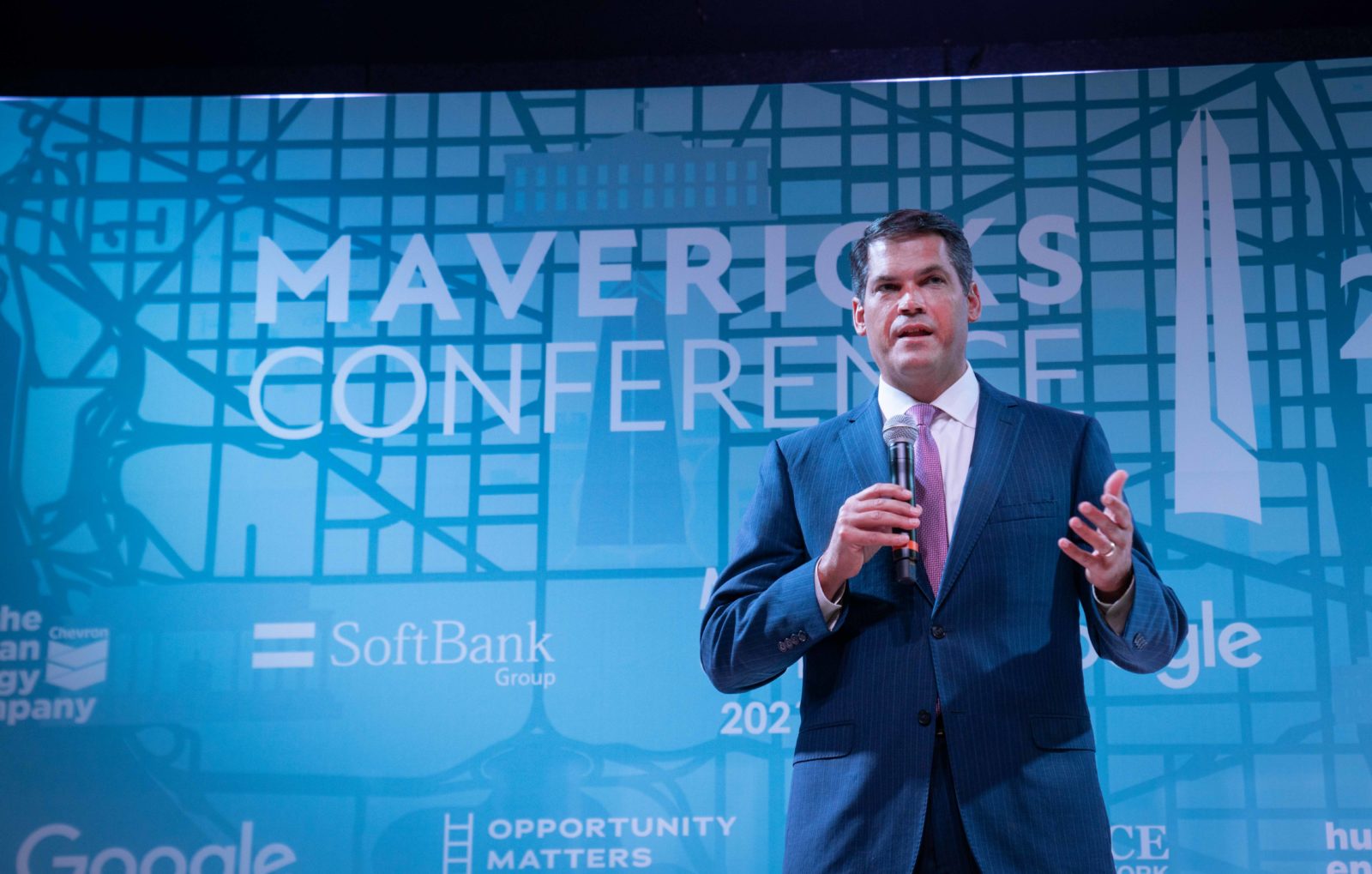 At a weekend conference in Washington, members of the national Maverick PAC network made the argument that a diverse, business-savvy elite still belongs in the Republican Party. Is anyone listening?

Last Friday night, in one of the bastions of deep-blue Washington, Democrats felt defeated. Earlier in the day, President Joe Biden had been dispatched to the Capitol to sell Democratic members of Congress on his two spending priorities. But the only bill passed that day was a month-long extension of highway funding.

A mile and a half away from Capitol Hill, at a trendy music venue at the Wharf, a small but exclusive group of young Republicans gathered to mingle with others of their kind. Fried chicken was abundant and the drinks were free. The guests’ preferred political party controlled none of the levers of power in Washington, but everyone was having a good time.

The 150 or so people filling out Pearl Street Warehouse were members of Maverick PAC, a national network of conservative young professionals that join together to make donations to Republican politicians. Some came from Washington or nearby Northern Virginia, while other members flew in from around the country. Texas was well-represented — one speaker’s reference to fossil fuels earned loud cheers from the oil and gas industry employees in the room — as was Florida. (Before he ran for Congress, Gov. Ron DeSantis had been a member of MavPAC.) Dunking on California, which just voted against a recall of Democratic Gov. Gavin Newsom, was a common theme.

But more than just a social gathering, the two-day conference served as a test case for the Republican Party in a post-Donald Trump era. Some prominent speakers, including former Secretary of State Mike Pompeo and former National Security Adviser Robert O’Brien, served in the Trump administration, while others, like Rep. Brian Fitzpatrick (R-PA), are known as moderates.

The former president, widely seen as the current standard-bearer of the Republican Party, was referenced infrequently; Trump supporters were in the room, but so were others who backed Rep. Liz Cheney (R-WY) when she blamed the Jan. 6 insurrection on the former president. One woman recalled hardly leaving her apartment last winter until she got the COVID-19 vaccine, while a young Ohio politician known to be an anti-masker described himself “as conservative as they come.”

Yet everyone seemed to get along, perhaps taking a page out of the Democrats’ anti-Trump playbook: When nearly everyone in your party wants to defeat the current president, bringing together politically disparate factions in opposition is an easier task than uniting those factions around a forward-looking vision for a party.

But while MavPAC members didn’t hesitate to share a few laughs at the expense of the Biden administration, they also tried to present a policy-focused, public service-driven approach to conservative politics separate from the world of election fraud and COVID-19 conspiracy theories that has animated segments of the Republican Party for the past year.

“We just don’t get into the weeds of having that fight,” said Ben Proler, a Houston-based employee at Shell who sits on MavPAC’s national board. “Just because we’re not in line with maybe what [the] mainstream GOP is talking about doesn’t mean we’re wrong. In fact, I think we’re right. And we’re talking about the issues that matter to our members, who are young and diverse.”

MavPAC launched around the midway point of George W. Bush’s presidency, and its founding lore lives on. “Ted Cruz and a bunch of guys were sitting around in Texas, and they thought about creating the future of the GOP, to create a brighter future for the GOP,” MavPAC national chairman Fritz Brogan recalled in a Friday night speech.

Brogan, the managing director of the restaurant group that owns Washington hotspots including Mission and The Admiral, took a moment to boast about some of the group’s more prominent alumni: Rep. Elise Stefanik (R-NY), the House Republican Conference chair; Rep. Mike Gallagher (R-WI); former Rep. Will Hurd (R-TX); and Sen. Josh Hawley (R-MO). “We have a tremendous history and a great future,” Brogan said of the group, which has between 350 and 500 members.

The network of young professionals, most of whom work in the private sector, is an educated, establishment crowd. At the start of the 2015 Republican primary, most MavPAC members gravitated toward mainstream candidates like Sen. Marco Rubio (R-FL) or former Florida Gov. Jeb Bush rather than Trump. (One of MavPAC’s earliest members was George P. Bush, the current Texas land commissioner who was recently spurned by Trump in his race for Texas attorney general.)

“We lost,” Proler acknowledged. But unlike some Never Trump Republicans, MavPAC members made the decision not to spurn the Trump administration.

“I think we tried to separate the fact that it was Donald Trump and more just like, this is a Republican administration. We are a network of very talented young professionals from around the country,” Proler recalled. “How do we best [fill] government with really, really, really good people who may not have all the political connections to get in the door?”

One of the group’s most visible alumni is Morgan Ortagus, who was a MavPAC national co-chair before becoming the State Department’s top spokesperson in Trump’s final two years. Like many MavPAC members, she opposed Trump’s primary campaign at first.

Ortagus moderated a panel discussion with O’Brien, Rep. Mike Waltz (R-FL) and Adam Boehler, a healthcare entrepreneur who served as CEO of the U.S. International Development Finance Corporation in the Trump administration. More so than the other events over the weekend, this event featured an ample amount of praise of Trump — particularly on his handling of relations with Israel.

“The world is not as safe as it was seven or eight months ago,” said O’Brien, who noted that the three largest threats he dealt with as national security adviser were China, Russia and Iran. He praised the Abraham Accords as a singular piece of good news in a challenging foreign policy landscape.

“The Accords are solid, they’re enduring, they are supported here. But the real support is coming from the parties in the Abraham Accords. You’ve got the UAE and Israel [who] realize that the U.S. [is] pulling back,” O’Brien argued.

Proler praised “the diversity of our membership — not just geographically, but we have a women’s initiative, an LGBTQ caucus, an African American caucus. So many different elements of our PAC are really showcasing the diverse group of youngish Republicans.”

The conference’s first night also featured a panel about criminal justice reform, a conservative priority that MavPAC has supported for years; a conversation with Miami Mayor Francis Suarez (who deflected a question about whether he has plans to run for higher office) and Sacramento Kings owner Alex Bhathal; and a discussion with Fitzpatrick, the Pennsylvania congressman, about campaign strategy.

In response to a question about remaining relevant when more extreme politicians throw out incendiary quotes and headlines to get more clicks, and more small-dollar donations, Fitzpatrick defended his own course of action.

“My politics are very moderate because we’re trying to grow the base of the Republican Party,” he said. “The vast majority of people in this country want pragmatic responsibility. They don’t want this red meat-throwing saber-rattling and incendiary talk. They want leaders,” Fitzpatrick said, explaining that a goal of leaders should be to “lower the temperature.”

The most praise for the former president came Saturday night in a keynote speech by Pompeo. “He taught me an awful lot,” Pompeo said of Trump. Riddled with folksy sayings about the value of integrity and hard work, Pompeo’s speech was more a paean to public service than a kiss-the-ring ode to his former boss.

“There is no job too small to work your tail off,” Pompeo said when asked what advice he would give to current service members who would one day like to serve as secretary of state. “Find some joy in what you do.”

Pompeo did not avoid conservative culture war issues — he compared The New York Times’s 1619 Project to Vladimir Putin as examples of entities that seek to “undermine the central things that we know to be true” — but he also did not dwell on the 2020 election or otherwise ingratiate himself to his party’s most extreme elements. And while he spoke of the left’s attempts to “infiltrate” American institutions, he told attendees that when fighting the left, “Do it with a smile.”

“My wife reminded me that when you talk about things in national security, you can sell a lot of Xanax. It can be pretty depressing. I’m not depressed at all,” said Pompeo. “If you’re gonna bet your money today, you should always place it on the United States.”