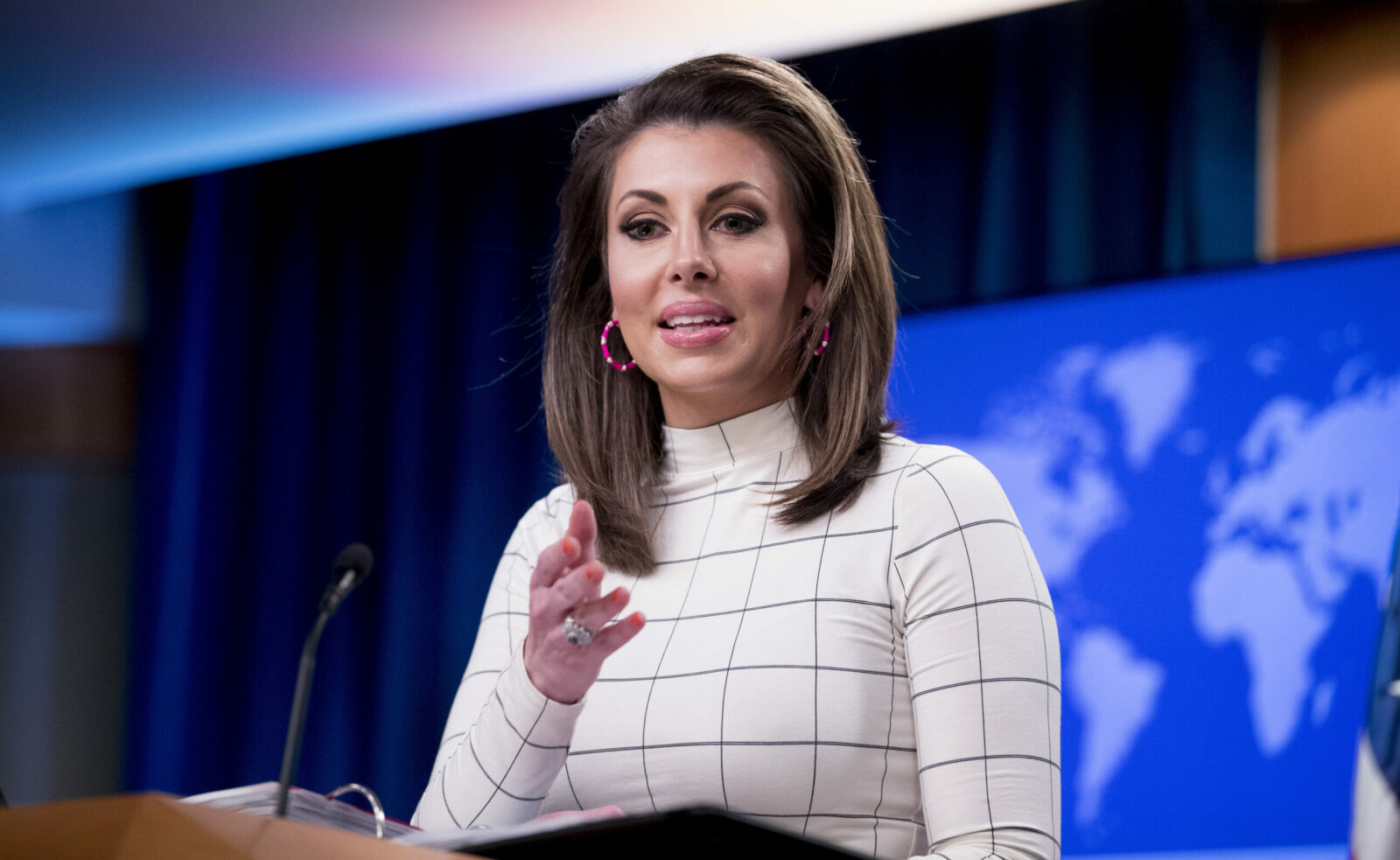 For the State Dept’s top spokeswoman, her journey to Judaism began in Baghdad

'I probably [needed] to find some religion,' Morgan Ortagus says of living in a war zone in 2007

When State Department spokeswoman Morgan Ortagus started college, she set out to study music, with aspirations of becoming an opera singer. Ortagus was a first-generation student at Florida Southern College, a 20-minute drive from her hometown of Auburndale, a small city midway between Orlando and Tampa. Ortagus was vaguely interested in politics — as a child, she watched C-SPAN with her grandfather — but when the 9/11 terrorist attacks occurred during her sophomore year, she changed her major to political science.

Ortagus then embarked on a foreign policy career that has taken her to postings around the world, including in Baghdad and Riyadh. She served in the intelligence community and in the Treasury Department under former President Barack Obama and is now one of the most recognizable faces in President Donald Trump’s Washington.

Nearly every step of the way, Ortagus’s career advancement was accompanied by an improbable Jewish journey: the evangelical Christian Republican converted to Judaism with a Conservative rabbi, culminating in a wedding officiated by feminist icon and Trump foe Ruth Bader Ginsburg. To partisans in D.C., that may seem like a contradiction. But personal integrity is Ortagus’s “brand,” said her best friend, Sam Vinograd, a CNN analyst who served on the National Security Council under President Barack Obama.

Today, Ortagus, 37, serves as spokeswoman for the State Department, reporting directly to Secretary of State Mike Pompeo. Lately, her days have been consumed by the novel coronavirus and the arduous project of organizing repatriation flights for the tens of thousands of Americans who were living, working and traveling abroad in more than 100 countries when the virus broke out. “We have never done this in the history of the State Department,” Ortagus said. “It’s a real testament to the spirit of America that we don’t leave anybody behind.”

Working in Washington is something of a homecoming for Ortagus, whose only prior press job was her first government job, as a junior press officer at USAID. Ortagus started in USAID’s Washington headquarters in 2007 but was soon offered a placement in Baghdad. “Everything was Middle East, like 24/7, at that time,” Ortagus said. As a 25-year-old just a few years after 9/11 and the start of the Iraq War, the answer was easy. “I was like, ‘Me, me, I’ll go!’” she recalled.

Ortagus first started exploring Judaism while in Baghdad. She quickly realized that living in a war zone could be “a little scary,” she said. “I probably [needed] to find some religion.” She saw signs advertising Friday night Shabbat services and, with her Jewish boyfriend back home in mind, decided to attend.

“I just had a sense of it really touching me in a way that religion had not in a very, very long time,” Ortagus said. Following the service, which was held in a U.S. Army trailer, attendees ate a “kosher-ish” meal at the chow hall. “I don’t think we ever had any challah, but we definitely had some rolls,” she said.

Ortagus attended services with Vinograd, who became a fast friend. “There weren’t a lot of young women in Iraq,” Vinograd said. She met Ortagus at a coffee shop in Saddam Hussein’s Republican Palace, a massive compound that at the time housed the U.S. embassy. “Our eyes kind of met across that room,” Vinograd says, “and I think internally we both breathed a sigh of relief or hope or something because we saw another young female face.”

Ortagus spent her days “chasing terrorist finance money,” as she put it, and nights attending intro to Judaism classes at the Edlavitch DCJCC. Shortly after she made the decision to convert, she was asked to serve as deputy Treasury attaché in Riyadh. With her boyfriend (now-husband) Jonathan Weinberger’s encouragement, she decamped for what was then a notoriously unwelcoming place for Jews. While in Saudi Arabia, she proceeded with her conversion.

“I think I have to be the first social media convert to Judaism,” Ortagus said. Every Friday, Weinberger would go to their rabbi’s home and call Ortagus on Skype. The “meetings” continued for a year, until Ortagus returned to Washington and completed her conversion at Adas Israel Congregation.

Ortagus remembers that her rabbi would say how frustrating it must be to convert to Judaism without going to synagogue or celebrating holidays. “I think it’s the opposite,” Ortagus said. “I think this is the most true form of a conversion to Judaism that you could have if you look at the plight of the Jewish people over time.” Her conversion while in Saudi Arabia was difficult, and Ortagus found that to be distinctly Jewish. “I think the fact that I’m observing Shabbat and Passover and everything in secret surrounded by people who hate Jews, that’s probably the most authentic form.”

But, Ortagus added, “Saudi has obviously come a very long way.” She visited with Pompeo in February, and their delegation stayed in the Diplomatic Quarter, where Ortagus used to live. “I didn’t even recognize it,” she said, shocked to see women without their hair covered, sitting and talking with men.

Ortagus was in Riyadh when the Arab Spring broke out. She watched as old-guard leaders fell across the region. “Thirty years of the Middle East being one way, and it’s changed overnight,” she said. A vacation to Syria fell through on the eve of the civil war. “Nine years later, I’m still working on Syria at the State Department. It’s kind of wild.”

After returning from Riyadh in 2011, Ortagus joined the private sector and started running in Republican circles in Washington. She became a national co-chair of Maverick PAC, a political organization for conservative young business professionals. Jay Zeidman, who founded the organization with George P. Bush, said Ortagus “turned the organization really into a new frontier.”

Ortagus was “ahead of the curve in what the Republican Party was embracing, and that really for Morgan was gender parity” — particularly on MavPAC’s board, Zeidman said.

Lisa Spies, a Republican fundraiser who served as the Jewish outreach director for Mitt Romney’s 2012 presidential campaign, agreed. “The Republican Party has a lack of women leaders,” said Spies, who got to know Ortagus when both volunteered with Miss America’s D.C. branch. “We’ve got some good ones, but we don’t have nearly as many as the Democrats.”

Luckily for the Republican Party, Spies says, Ortagus is “not only a woman but a superstar woman.” Spies told JI she pushed Ortagus to run for Congress a couple of years ago. “She actually was open to it,” Spies recalled. “She was always being pushed to do a million different things because everyone wanted her,” though Spies thought Ortagus chose well by choosing to work for the Trump administration. “She could run in a couple years if she wants.”

Zeidman, who served as former President George W. Bush’s liaison to the Jewish community, says Ortagus’s 2013 wedding captured her worldview: “She was just looking at Jonathan like, ‘I’m doing this,’ and that’s just how she approaches life. She sees something and she does it.”

The lead-up to Ortagus’s wedding is its own story. Prior to a large Jewish ceremony, she was joined by immediate family at the Supreme Court, where Justice Ginsburg performed a civil ceremony. How did she get Ginsburg to agree to that? “Well, she’s our neighbor,” explained Ortagus, whose now-husband served on the building’s condo board and got to know Ginsburg, who lives down the hall. “I literally just put a note in her box,” Ortagus says, and later received a typed response on official Supreme Court stationary: Ginsburg would officiate the wedding.

Ortagus felt overwhelmed at the ceremony. “I remember looking around and thinking, ‘How the hell did I get here?’” she says. “I’m just sort of nobody who came here with big dreams and big eyes and worked hard.”

In 2018, Ortagus and Vinograd founded a consulting firm, flaunting what they saw as their unique brand of bipartisanship. They briefly wrote a Marie Claire column titled “Opp-ed” — as in, “opposing political sides” — in which they discussed and explained their political disagreements. (One, from September 2016, was called “In Defense of Melania Trump.”) The two also had overlapping cable careers (Ortagus on Fox, Vinograd on CNN), and they would prepare together. “We’d often talk about, off camera, the key topics that we were both being asked to analyze at work, because that way I could understand the more traditional conservative Republican view,” Vinograd said, “and I would give her my viewpoints so that she understood what kind of the left-of-center view was.”

Ortagus left their firm shortly after its founding to join the Trump administration. Vinograd hopes to eventually have her friend back — “she was incredible at business development” — but in the meantime, she is proud of Ortagus for maintaining her integrity and her relationship with the press when “her boss and the president have a different approach,” Vinograd said. “She’s really maintained her brand as analytic, thoughtful, and kind, and it takes a lot of self control to do that on so little sleep.”