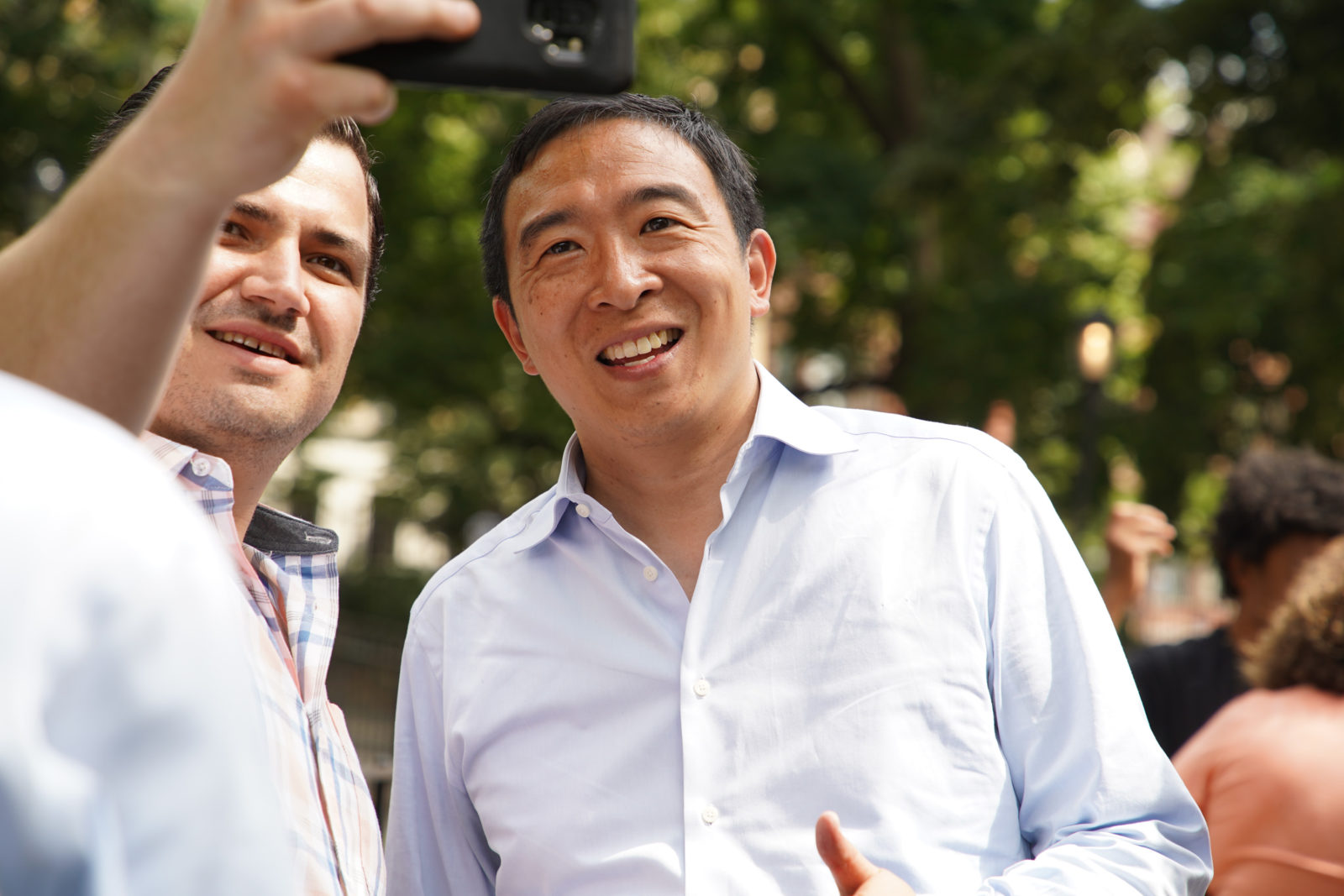 ‘I believe the Forward Party is, in many ways, a natural response to many of the concerns of the Jewish community,’ Yang explained to Jewish Insider

Andrew Yang, the entrepreneur and former presidential longshot, said his experience navigating the fraught politics of the Israeli-Palestinian conflict last spring as a Democratic candidate for New York City mayor — when escalating violence between Israel and Hamas in Gaza coincided with an uptick in antisemitic incidents — informed his decision to launch a third party that he hopes will act as a moderating force in American politics.

“We’re seeing antisemitism arise in different ways now, and that’s something that I find very worrisome,” Yang said in an interview with Jewish Insider. “I believe that’s another reason why we should have a more robust, multi-polar system.”

Yang, who recently registered as an independent after decades as a Democrat, recently revealed that he was starting the Forward Party in an effort to reshape what he views as an entrenched political system in thrall to various forms of extremism and groupthink. The announcement appears in the final chapter of his eponymously titled new book, Forward: Notes on the Future of Our Democracy, published by Crown.

“I believe the Forward Party is, in many ways, a natural response to many of the concerns of the Jewish community,” Yang said.

The 46-year-old businessman turned politician, who is ultimately aiming to attract 20 million members to his new party, lays out six “key principles” in his book, touching on such procedural ambitions as “ranked-choice voting and open primaries” as well as broad policy initiatives like “human-centered capitalism” and “universal basic income.”

While guaranteed monthly payments of $1,000 for American citizens 18 and older was the central proposal of his 2020 presidential campaign — helping him garner a sizable fan base of enthusiastic young followers — Yang emphasized that he is now largely focused on ballot initiatives that will enable ranked-choice voting and open primaries in states around the country ahead of the 2022 midterms.

Yang placed fourth in the June New York City mayoral primary, which used a ranked-choice voting system. But instituting such changes more expansively, he argued, would help create the conditions for new coalitions — such as the one he forged with the Jewish community during his mayoral campaign — capable of loosening the current two-party framework that he views as “very vulnerable to authoritarianism.”

“I think if you have certain ideas, and you only have two parties, that those ideas can become more pernicious and widespread and powerful than if you have more parties that represent different points of view,” Yang told JI. “The last thing that you’d want is certain points of view that are in a subset of the Democratic Party to become more prevalent.”

Yang was alluding, at least in part, to what he characterized as a “strong narrative” among progressive Democrats “that tries to separate everyone into either oppressor or oppressed” — a sorting mechanism that, he suggested, takes a particularly malevolent turn when coupled with growing anti-Israel sentiment on the far left.

“In this narrative, the people of Israel are the oppressors, and what’s interesting is that when you have conversations with other people in other contexts, you could make the case that Jews are actually historically the most oppressed people in the history of the world,” Yang said. “There’s this narrative that’s taking place that’s very binary that will give rise to antisemitism, and that oppressor versus oppressed narrative leaves no room for nuance.”

Yang indicated that he had “encountered people who very much held” that view when his mayoral campaign overlapped with the conflict between Israel and Hamas. As violence intensified last May, Yang weighed in with a supportive statement for the Jewish state. “I’m standing with the people of Israel who are coming under bombardment attacks,” he wrote on Twitter, “and condemn the Hamas terrorists.”

Though his pro-Israel statement echoed those of a number of leading Democratic candidates in the crowded field, Yang found himself subject to the most intense scrutiny from critics who protested that he had excluded Palestinians impacted by the conflict. Over the following days, Yang was uninvited from a Ramadan event and heckled by pro-Palestinian activists at a campaign stop in Queens.

Seeking to quell the backlash, Yang released a lengthy note of contrition in which he clarified his initial remarks. “I mourn for every Palestinian life taken before its time as I do for every Israeli,” he said at the time. His statement, however, appeared to do little to appease his detractors, many of whom excoriated the follow-up on social media.

“There were very, very strong emotions and exchanges, certainly around Israel, and some of the sentiments I encountered I did disagree with very significantly,” Yang recalled. He declined to elaborate, simply remarking that he “had exchanges with people who have extreme points of view that I don’t think should be mainstream.”

But if Yang was disoriented by the intense pushback elicited by his social media message, he was more alarmed by the string of antisemitic attacks that had many Jews in New York on high alert during the May conflict..

“During my mayoral campaign, I became aware of just how much a rising danger antisemitism is, and it’s genuinely frightening to me,” he told JI. “I saw that antisemitism is getting stronger on a level that, I imagine, Jewish people are very aware of and sensitive to. I’m not sure other people would realize.”

Despite his newcomer’s status in the mayoral primary field, Yang, who lives in Manhattan, earned widespread support from the local Orthodox Jewish community thanks in part to his laissez-faire approach to the yeshiva education system as well as his unequivocal rejection of the Boycott, Divestment and Sanctions movement targeting Israel. Yang described the movement as “rooted in antisemitic thought” in an opinion piece at the beginning of his mayoral campaign.

Yang said his newfound relationships with Jewish leaders in Brooklyn and Queens have imbued the Forward Party with a “different urgency,” highlighting “some of the excesses” on “the Democratic side,” most recently including a House vote last month in which an outspoken cohort of progressive Democrats opposed the approval of $1 billion in supplemental funding for Israel’s Iron Dome missile-defense system. “I thought that vote was deeply troubling,” he said.

“I learned a lot from the Jewish community,” Yang told JI. “There’s an integrity to the community I just really adored and appreciated and I’m very grateful for. It’s something that’s missing in far too many parts of this country.”

As he embarks on his latest political project, Yang said he has spoken with Jewish supporters who are disenchanted by the Democratic Party. “They’ve expressed a number of concerns that have made them excited about the Forward Party,” he told JI. “Number one, they see that there is a strain within the Democratic Party that will make support for Israel more and more contentious moving forward — a strain that does, unfortunately, include antisemitism.”

The other element, he said, “is that they see that right now the system is not designed for success, and it’s subject to very negative and authoritarian impulses.”

“I just had a call today with someone who’s the child of Holocaust survivors, and he said to me that the Forward Party is the most important thing going right now because it has a chance to preserve a stable system and that most people don’t see it,” Yang told JI. “Most people are trapped in the bipartisan back and forth. It’s like, OK, this party wins, that party wins. But then my Jewish friend who I just spoke to said, ‘No, the issue is really whether democracy itself will maintain integrity and survive.’ And that’s what the Forward Party’s laser-focused on.”

Yang, who is Taiwanese-American, believes that Jews and Asians in particular represent a natural coalition for the Forward Party amid a rise in hate crimes against both groups. “A lot of this stuff I discovered during the mayoral [campaign],” he said. “I didn’t realize how tied together the Jewish community is with my community and the survival of the system.”

“Jews and Asians are kind of in a similar boat in terms of, like, we need a functioning system of integrity to stand the test of time or else our communities are among those that will be targeted,” he said. “Truly.”

Yang recalled attending an anti-Asian hate rally when he was running for mayor that helped clarify why he now believes forming a third party is necessary. “People started chanting ‘defund the police,’” he told JI. “I said to a friend at the time, ‘If someone thinks that defunding the police would be a good thing for Asians, they need to have their head examined.’”

“The Forward Party is going to build a very significant coalition of Americans who are typically more moderate, more practical, less ideological and want the system to work,” Yang claimed. “I think that will have high overlap with the Jewish communities and the Asian communities who, I think, tend to be a little bit more moderate and practical.”

More broadly, Yang speculated that his party would also appeal to business people and those who work in the tech industry. “Business people right now look at our current political system and are like, ‘Where am I supposed to fall in this?’ — in part because the two parties are hewing toward various extremes,” he said. “I have a lot of friends in the tech community, and many of them are very excited about trying to upgrade the system itself.”

“It’s going to be a really interesting, diverse coalition, and I’m super excited about it.”

Asked if he would run for office again as a member of his own party after two failed Democratic campaigns, Yang said he is currently dedicated to liberalizing electoral systems at the state level.

But he didn’t explicitly rule out the possibility either.

“Right now, I’m focused on 2022,” he said. “We have to try and make the system stronger. I’ll do whatever I think I’m called to do, but I’m genuinely laser-focused on trying to use the time we have, because we don’t have limitless time.”