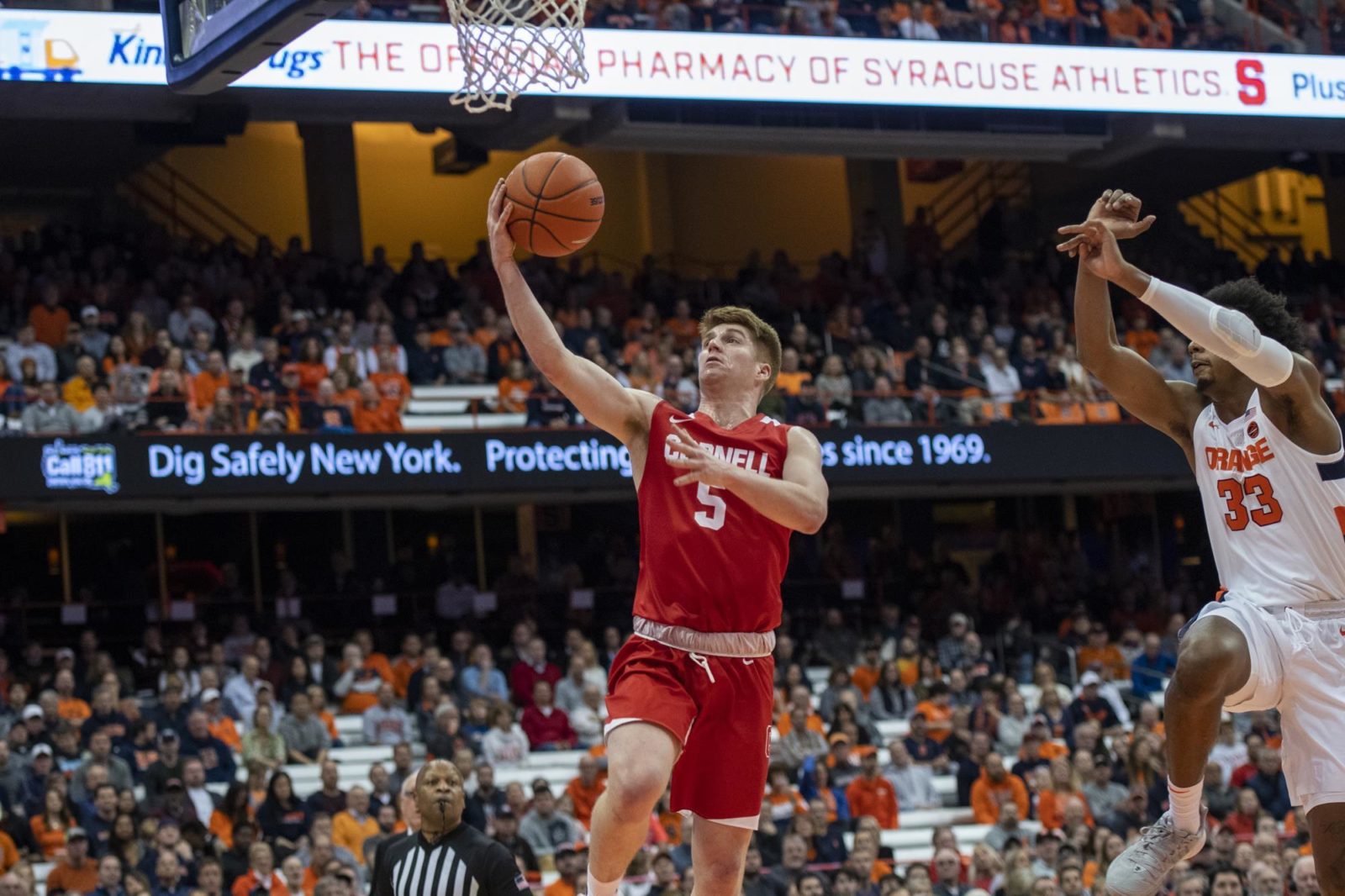 In the District, Judaism, politics and college hoops come together for Bryan Knapp

After the Ivy League canceled his senior season at Cornell, the Charles E. Smith Jewish Day School alum is finishing his NCAA basketball career at GWU

For Bryan Knapp, playing basketball at The George Washington University is something of a homecoming, like hitting shots at your favorite gym or wearing your old high-school jersey.

It isn’t just that the former Cornell guard is returning to his hometown to finish out his NCAA eligibility after the Ivy League canceled all sports during his senior year in Ithaca. It’s that as a GW Colonial, he’ll be taking the court at the university’s Charles E. Smith Center — an arena that shares a namesake with the school where he developed his basketball chops.

The start of the COVID-19 pandemic in March 2020 sent Knapp back home, as classrooms and training facilities at Cornell shut down. But when other teams began to return to campuses for practice last summer, Knapp was not among them; the Ivy League, of which Cornell is a member, announced in July 2020 that it would cancel all fall sports.

“It was really frustrating. We were the only conference in the country that didn’t compete,” Knapp, who is 22, recalled. He completed his senior year without basketball, graduating in May with a degree in political science.

Because he still has a year of eligibility left, Knapp now has another shot at finishing out his time in the NCAA. Off the court, he’ll be pursuing a master’s degree in sports management; on the court, he hopes to play well enough to keep open the possibility of a professional career.

“I’ve always had aspirations of playing professionally in Israel after college,” Knapp said. (At least two other GW alumni have gone on to play in Israel — Moti Daniel, a 6-foot-7, Holon-born Israeli forward who played for the Israeli national basketball team in the 1980s and 90s, and Mike Hall, a 6-foot-8 forward who played one season for the Washington Wizards before an international career took him to Maccabi Ashdod.)

Knapp, who is 6-foot-1, finished his junior year at Cornell with an average of 7.1 points per game, a solid showing for D1 college ball’s only current player from JDS, as Knapp’s alma mater is known around the Beltway. (At Cornell, he follows in the footsteps of the 6-foot-8 Eitan Chemerinski, who played for the Big Red from 2009 to 2013.) Knapp graduated from JDS in 2017 as its all-time top scorer, averaging 27 points per game, and leading the school to its first conference championship since 2004.

“I had a chance to transfer to a bigger school, to a more basketball-oriented school, after my sophomore year” of high school, Knapp recalled. But he decided to stay at JDS. “I thought it would be better to excel and to help lead our team to a championship, which we ultimately did in the Potomac Valley Athletic Conference my senior year.”

Staying at JDS also allowed Knapp to develop interests beyond basketball. “I was in a play at one point. I was in a cappella. I was on the debate team. I was forced down these other avenues that otherwise, had I been at a more sports-centric school, I don’t know that I would have had the time for,” he explained.

Now that he is back in Washington, Knapp gets to spend a lot of time with his family. But he is also finally getting to know Washington for the first time. Though he grew up in the Woodley Park neighborhood, JDS is located in nearby Rockville, Md. “Every morning, the commute was in the opposite direction. So I never really explored downtown. But it’s nice. It’s like being a tourist in my own city, which I enjoy,” said Knapp. He commented on how fun the Foggy Bottom neighborhood is — a comment with which some non-college-aged Washingtonians may disagree — and noted that he enjoys being a short walk or scooter ride away from the White House.

With his Greek roommate, who is also a member of the basketball team, Knapp has been getting to know Washington. “There’s something very funny about someone from Greece — someone from Athens — and someone from D.C. exploring D.C., both being equally clueless to the layout of downtown,” Knapp joked.

As he works toward his degree in sports management, Knapp is trying to keep in mind how to merge his master’s with his political science passion from his undergraduate years. “I wonder,” he questioned, “how I can take a political science background and apply it to the world of sports. I wonder if there’s room for connectivity there. And I think there is.”

Last fall, when Knapp found his schedule freed up without basketball, he and Jimmy Boeheim, a teammate who is now finishing his NCAA career at Syracuse under his father, the legendary Syracure basketball coach of the same name, launched a get-out-the-vote effort among Cornell student athletes. “It wasn’t easy, but it was worth it, and we had an astonishing turnout in the end,” Knapp said.

“It was important for me to not tell people who to vote for but to tell people to vote,” he added. “If not for our efforts, a lot of student athletes wouldn’t have voted. And that didn’t sit well with me.”

Playing in Washington also offers Knapp a return to his political roots. “At Shabbat dinner at our house, or any house really, when we were growing up, we’d go, we’d catch up for 15 or 20 minutes, and then we dive straight into politics for the rest of the meal,” said Knapp. His father, Bill, is a partner at the prominent Democratic media firm SKDKnickerbocker — the first “K” is for Knapp — and he produced Michael Bloomberg’s television ads during the former New York City mayor’s short-lived presidential bid last year. Knapp’s sister Sam works for the Arizona Democratic Party.

Knapp is again a regular at his parents’ Shabbat table at their home in the Foxhall neighborhood north of Georgetown. “Judaism has always been part of our family,” he said. “I almost took it for granted. Everyone I talked to was Jewish, [and] when you get to college, that’s not the case. There are certain subtle overlaps and mannerisms and other day-to-day interactions that you have with Jewish kids your age that you don’t have with non-Jews your age.” 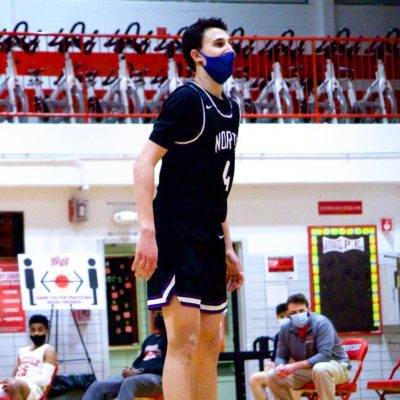 At Cornell, Knapp was active at Chabad. He also had other Jewish teammates at Cornell, as well as a Jewish assistant coach. At GW, he is the only Jewish player on the team, and he hopes to get involved with Chabad in Foggy Bottom as well. “There was a daily dose of Judaism at Cornell, certainly, whereas at GW it’s a little bit different,” Knapp observed. At a recent team dinner, he declined to eat the pork that was served because he keeps kosher.

“​​Then I get to explain, ‘I’m Jewish. Look at my [Star of David] necklace. This is why I don’t eat pork.’ And so that was, I think, insightful for them. But it’s also rewarding for me. When those moments come about, I get to express something that I’m proud of,” said Knapp.

Knapp has not had to personally confront antisemitism, but he is used to probing questions — mostly curious and good-natured — from his Cornell teammates about his identity. In May 2021, when violence flared between Israel and Hamas, “they came to me asking hard questions, but important and pertinent questions, and I loved answering them,” he noted.

From the beginning of his time at Cornell, Judaism was an important part of Knapp’s identity, including on the team. “I never hid my Judaism in any way. The biggest example of that is to look at the roster — it says Charles E. Smith Jewish Day School under my name, that’s the very first thing you see on both the Cornell and GW roster. And I love that,” Knapp remarked. “I look forward to carrying that weight with me.”

He’ll bring that identity with him to the Charles E. Smith Center for GW’s home opener in November against Saint Francis University. And when he steps off the court, he’ll put his Star of David necklace back around his neck.