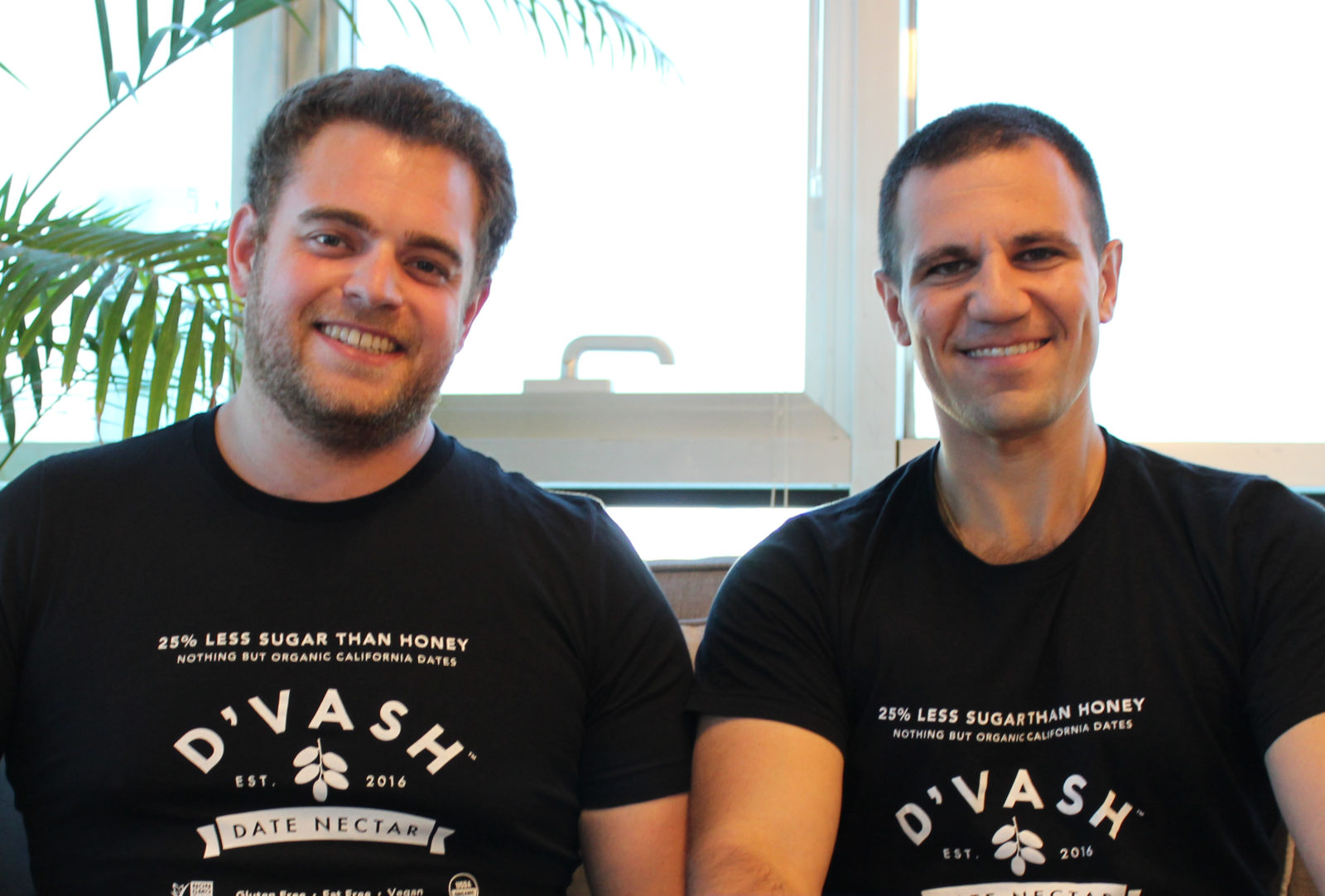 As teenagers, David Czinn and Brian Finkel joked that they would go into business together one day. Little did they expect that their pipe dream would become reality, or that their fledgling business — based on an ancient biblical fruit, and with one foot in the very modern startup nation — would grow into a formidable international operation with private backing and products sold in 7,000 stores across the U.S.

D’vash Organics — whose name comes from the word in the Torah used for honey, which in biblical times referred to date honey — specializes in date syrup and date energy bars. Czinn and Finkel serve as president and CEO, respectively, of D’vash, which currently sells goods in the U.S. and South Korea, with plans to expand to Canada.

Although D’vash is based in California and Czinn resides in Los Angeles, Finkel has lived in Israel since 2013 and works remotely overseas, traversing a 10-hour time difference to communicate with his partner.

With executives on two continents, D’vash lives the premise that it will unite different groups of people. Two Jews from the Midwest working with partners in the United Arab Emirates and Hong Kong, with a business team based in the Philippines, sell their Middle Eastern-influenced products around the world. For Czinn, D’vash bears the legacy of his grandmother’s love of feeding people and the commitment of his parents’ — who are doctors — to a healthy lifestyle.

“I think there’s something very special with food,” Czinn told Jewish Insider. “It bridges a lot of gaps… there’s nothing better than when you sit down at a table and you break bread together. If there’s a good meal, I think it can solve all the problems… [because] you get people comfortable with one another,” explained Czinn.

Czinn and Finkel met at Yeshivat Eretz Hatzvi, a gap-year program in Jerusalem, where they bonded over food, and experienced what Finkel called “one of the most formative years of my life.” 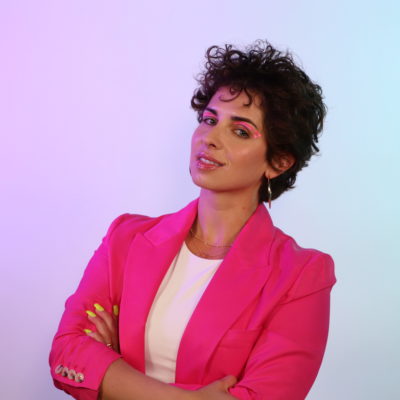 The Cuban Jewish entrepreneur behind 305 Fitness

The origins of D’vash Organics lie in an innocuous phone call — like the numerous phone calls Czinn and Finkel enjoyed as friends — when Finkel described date syrup’s ubiquity in Israel.

“One day… I realized I was eating Silan date syrup all the time. And I kind of just had this epiphany. And I called David, who had been in the food industry already for a number of years, and I said, ‘Hey, what do you think about date syrup?’”

Czinn was confident that date syrup could take off in the U.S. He had initially broken into the food industry when he noticed the health-conscious food culture in L.A. and detected a market for an organic fruit snack company, which he then co-founded with his cousin, called Fruigees. Czinn now saw demand for a cheaper, healthier alternative to honey, and date syrup fit the bill.

The two friends were intrigued about bringing date syrup to an American audience, and the timing was perfect: Finkel was between jobs and Czinn had just enjoyed success with Fruigees. Overcoming the skepticism of friends and family, Czinn and Finkel took the plunge and created D’vash.

D’vash is dedicated to providing a product that is healthy — both for people and the environment. Their syrup is cheaper, more sustainable and contains 25% less sugar than honey; it is also vegan and does not include high-fructose corn syrup. Because pediatricians and parents are concerned about children consuming large amounts of protein, D’vash addresses that worry by manufacturing energy bars without high protein content.

When it was a new company, D’vash endured many rejections before eventually securing vital contracts with sellers and distributors.

“Brian showed me all of the aisles filled with date syrup in the Middle East. We really believed that we had what hummus was 10 years ago, prior to Sabra being acquired by Pepsi,” explained Czinn.

With products already sold in three countries, and contracts with major American stores including Whole Foods, Sprouts, Costco and CVS, D’vash has expanded to the skies in a new partnership with Cathay Pacific Airlines, announced last month. The Hong Kong-based airline will provide D’vash’s energy bars as refreshments on their flights.

D’vash’s success illustrates the broader shifting political climate in the Middle East, and highlights the bridgeable gaps among divided groups. In the company’s early days, D’vash relied on dates grown in the Coachella Valley in California, but as the business expanded, Czinn and Finkel needed a larger date supplier, and stumbled upon the United Arab Emirates-based Al Barakah Dates Factory.

“When we started to reach out to alternative suppliers, we did a deep dive — it was probably a Google search — and we reached out to Al Barakah,” recounted Czinn. Although the date company was initially skeptical, its officials were quickly impressed as D’vash’s orders grew in size and frequency, and were eager to enter a formal partnership with Czinn and Finkel.

Although Al Barakah did not know that D’vash’s founders were Jewish, nor that one is Israeli, they coincidentally floated a potential partnership the same week the Abraham Accords, which normalized relations between Israel and several Arab nations, including the UAE, were announced. By the time Finkel flew to Dubai to meet with his Emirati associates, direct flights had opened between Israel and Dubai, creating a quick option to conduct business.

For Czinn, the Abraham Accords “really made me believe that this entire thing was fate.” It also meant business with the UAE was easier and cheaper because Finkel was a short plane flight away. 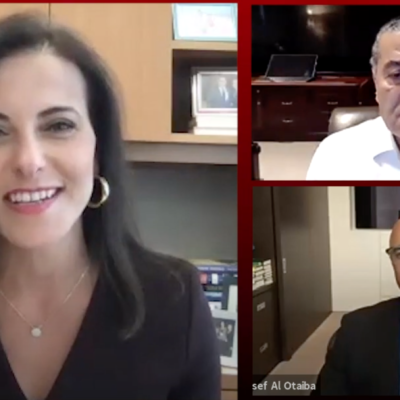 While visiting Dubai to formalize their cooperation, Finkel and his wife went out to dinner at Armani Kaf, Dubai’s first kosher restaurant, with his Al Barakah counterpart and his wife. When Finkel mentioned that he lived in Israel, his new business partner reacted positively and explained that he had long conducted business with Israel using unmarked containers traveling through Jordan; the new peace treaty smoothened his business dealings.

“Now that we’re vertically integrated… we can remain nimble, and build what the market desires, and so whatever the market dictates in terms of what type of products people are looking for, we have all the ingredients necessary in order to create the right products,” said Czinn reflecting on the benefits conferred by partnering with Al Barakah dates.

For the two founders, the learning curve has been steep, but filled with memorable moments. At first, in a push for product sustainability, D’vash manufactured all of its syrups in glass bottles, but ran into trouble.

“We would get emails on a regular basis. No matter how well we would pad the product — bubble wrap it, put it into stronger, corrugated boxes — FedEx and UPS would manage to break it,” related Czinn. In response, the company pivoted to plastic bottles, acknowledging the necessity of using less-green, but more durable containers.

They also learned the power of persistence first-hand. After sending numerous emails to the buyers at Costco touting their new products without receiving a response, Czinn and Finkel emailed the company’s CEO, CFO and COO in a desperate Hail Mary. To their surprise, one of the executives forwarded the email to the company’s buyers, and the buyers responded to D’vash to negotiate a contract.

Once the Costco deal was solidified, the first shipment ran into trouble when it was blocked by a large cargo ship stuck in the Suez Canal. “Never in a million years did I think a large news story would impact mine and Brian’s life,” Czinn reflected.

Although they worried Costco would be upset about the delay due to a “dog ate my homework” type of excuse, the international wholesale company was understanding of the delay. For Czinn and Finkel, the episode reinforced the importance of perpetual resilience.

“We’re constantly having to innovate, think outside of the box, get creative and constantly figure out ways to win,” reflected Czinn.

The duo hope to roll out more products, expand to more countries and score contracts with brands as an ingredient in other foods.

Despite the Boycott, Divestment and Sanctions movement’s slowly growing presence, D’vash has not faced resentment because of Finkel’s Israeli citizenship; on the contrary, Finkel’s experiences in Israel is a chance to create awareness about the Jewish state.