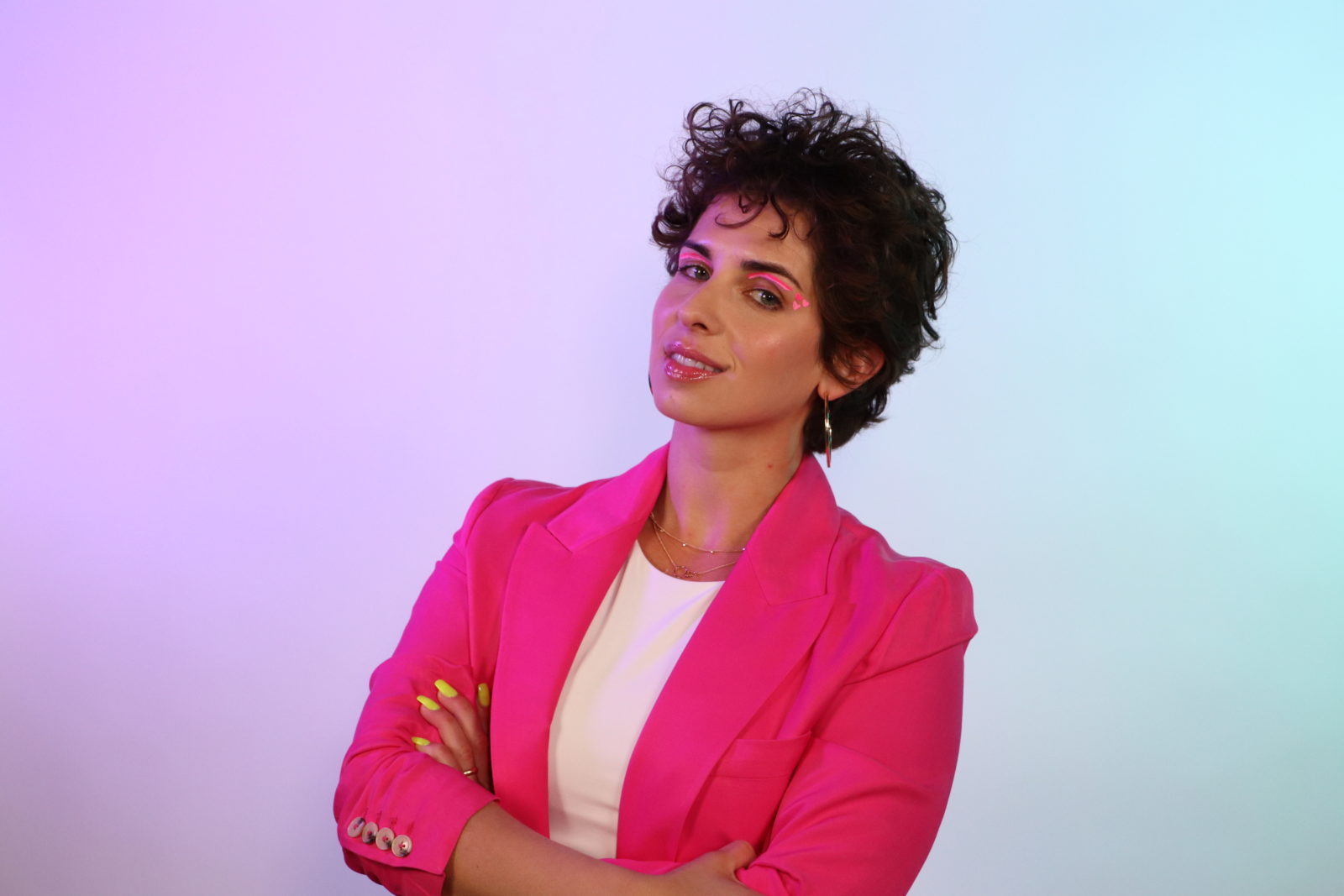 The Cuban Jewish entrepreneur behind 305 Fitness

“I’m having a really crappy morning,” Sadie Kurzban told thousands of viewers in a YouTube live stream. It was April 2020, just weeks into the COVID-19 lockdown. Kurzban was at her parents’ house in Miami, sporting a sparkly crop top, hoop earrings and big curly hair; with an earpiece over her head, she stood on a patio in front of a hot pink wall, Ariana Grande playing in the background.

The 31-year-old founder of 305 Fitness, a company offering popular cardio dance classes to a devoted and growing following, told her fans that she had just learned her business did not receive a Paycheck Protection Program loan from the federal government. “Sometimes, these systems are set up so that the big guys win and the little guys don’t.”

She spoke candidly, unscripted, in front of a grainy webcam — a contrast to the pristinely edited videos from competitors like Peloton. “I’m feeling quite upset, demoralized. But I’ll tell you what. It’s OK,” she said. “The reason why I love 305, the reason why I like to move, is because so much of our lives, we are told we don’t matter. And when I get to move and shake and connect, I’m able to boost that self-esteem and that confidence and most importantly that fire part of myself that tells me I’m worthy and I have to keep trying.” When she finished her pep talk, she launched into a 40-minute high-intensity dance workout.

Normally, Kurzban would have been teaching a class at one of 305’s seven studios in New York, Boston or Washington, D.C. But in March 2020, 305 shut down its in-person offerings and — like so many other fitness companies — began offering free workouts on YouTube, streamed live from instructors’ apartments. The company had no playbook at first; one instructor used cans of beans for the strength-training part of a workout because she didn’t have weights at home. Another almost knocked over his parents’ fine china. Classes were imperfect, but they were authentic, and participants loved it.

“I need your energy! Whoo hoo Sadie DANCE! 👍🏻👍🏻🙌🏻” said one comment. “Thank you Sadie! I aspire to be like you!” another read. “u bring me joy and love and deserve everything.”

For Kurzban, who started the company after winning an entrepreneurship competition as a senior at Brown University, 305 is more than just a dance class. It’s a community, and a way of life — one that investors have bought into, pouring millions of dollars into the venture she founded in 2011. “One of the ways that we stand out is it’s not just a good workout, although it is. It’s also just so good for your mind, body and soul,” Kurzban told Jewish Insider during a recent Zoom interview. She joined the call from a lounge chair on Miami Beach.

Raised on Key Biscayne, a barrier island across from Miami, Kurzban has no formal dance training. “I’m half-Cuban, half-Jewish. I think the dancing comes a little bit more from the Cuban side. It’s just a lot of love of music and confidence and expressing yourself through your body,” she explained. “Latin people, we are a very expressive bunch and do a lot of that through physical humor and movement.”

The daughter of liberal activists, Kurzban was taught to “question everything, including Jewish teachings.” She attended Jewish day school as a kid and learned Hebrew for an hour and a half daily — “Sadly, I know none of it” now, she admits — and is now trying to find ways for Judaism to fit in with her life.

“Friday nights were the time to get together, [and] we did the blessings [growing up],” she recalled, but her family became less observant when her father’s parents died .

“[My father] allowed us to choose for ourselves what we believed in,” Kurzban explained. “I ended up marrying a guy who’s Jewish and whose family really relates to it. So definitely, it’s in my culture and I feel very culturally Jewish. But like many people our age, we are figuring out what it means for us to be Jewish in 2021 and beyond.”

Kurzban’s commentary in that video from last April is standard fare for her: sprinkle some light politics with a motivational speech before smoothly transition to dancing. She learned from her parents to advocate for causes she cared about without concerning herself with others’ opinions. “We never learned to care for other people’s money, or there was never a sense of what the neighbors were doing. It was just, have conviction and belief in yourself and march forward and roll,” said Kurzban.

Her father, Ira Kurzban, is a prominent immigration attorney who has argued on behalf of Haitian immigrants in front of the U.S. Supreme Court. Her mother, Magda Montiel Davis, is infamous in Miami’s Cuban community for an ill-fated and very public display of affection for Fidel Castro. “She was known to actually be in favor of a lot of Fidel’s policies in Cuba, which is very, very rare for a Cuban exile to feel that way,” said Kurzban.

In the early 1990s, Montiel Davis ran for Congress against Rep. Ileana Ros-Lehtinen (R-FL), who retired in 2019 after 30 years in Congress. “She ran as a Democrat in Miami, which was even less popular then,” said Kurzban. Her parents taught her a lesson that has served her well in dance and beyond: “They just really taught me to think for myself, think independently,” Kurzban observed.

Growing up, Kurzban struggled with body-image issues, and found dance to be “the only fitness class where I wasn’t just totally hating on myself and counting calories and being mean to myself,” she noted. “It was the first fitness-style class where I was actually just really enjoying myself and feeling free and feeling proud of my body.”

She got into Zumba in high school, and “slowly but surely made my way from the back row to the front row,” she recalled. By the time she graduated high school, she was teaching Zumba classes; when she got to college at Brown, she started experimenting with her own style, teaching fitness classes for extra cash at the university gym.

She majored in economics but was unsure what to do with the degree. “I was kind of wandering through college and figuring it out,” Kurzban said. “I knew that [I would do] something, probably, where I was some kind of leader or teacher because that’s where I get the most fulfillment.”

She started working on turning her passion into a business a year before graduation, and her senior year, she won $25,000 toward the project in Brown’s Entrepreneurship Pitch Competition.

She took that seed money with the dream of building “a single studio in New York that felt like a nightclub with the best talent. Obviously, we’ve grown bigger since,” said Kurzban. 305 Fitness now has seven studios, and Kurzban hopes to open more; it also has an online membership program, “305 At Home,” where people can stream classes on their phones or TVs; and the company certifies instructors around the country, who can teach 305-inspired classes outside the company’s three brick-and-mortar locations.

When she was first approaching investors, some of them didn’t understand what she was trying to do, and would suggest ways she change her fitness program to focus on metrics — similar to Orange Theory, which tracks participants’ heart rate and workout intensity. “There are all kinds of weird suggestions I’ve gotten through the years,” Kurzban said. But she had an intrinsic understanding of her ideal consumer — young women, like her and her friends. “I just knew in my gut, like, this is the future, this is what people want, is something that’s social and community-driven and fun and self-expressive.”

Unlike some other fitness classes, 305 instructors do not have set choreography they must use, nor do they plan out their entire classes in advance. Each class has a live DJ who chooses the music as they go, and the instructors choose dance moves to match the music. “Everything is to the beat,” Kurzban explained. “It’s high-intensity, high-energy, aerobics or dance cardio, and it blends dance moves like a body roll or a booty shake with more sports drills, like jump squats and jumping jacks.”

305 workouts are not about losing weight or looking a certain way. Sometimes 305’s live-streamed workouts — which are now professionally recorded in 305 studios rather than in instructors’ homes — will feature, next to the instructor, a 305 subscriber who Zooms in from their bedroom, full of excitement but generally lacking in dance skills. The goal is to communicate that the classes are not about skill but about having a good time. “305 is about people feeling good in their skin, people feeling like they can express themselves authentically.” Kurzban has also sought to spotlight LGBTQ and non-white instructors and participants.

Now that 305’s studios are open again, the company has to try to turn virtual participants into in-person, paying customers. “A lot of our business is just driven by word of mouth,” she said. “I think it’s hard to do it until you come see it. I don’t know how well we do on the marketing and positioning front.”

The name “305” is an homage to her hometown (Miami’s area code is 305), inspired by positive and negative aspects of her upbringing. The company’s vibe is “Miami Vice,” with neon blues, pinks and greens coloring the studios and branded apparel.

“I had the idea when I was out dancing with a girlfriend in Miami,” noted Kurzban. “We just looked around and it was so fun. We’ve been dancing for hours. And I wanted to recreate that same party vibe.”

But the culture that emphasized the physical in all its glory — suntanning, clubbing and working out in South Beach — also had a dark side. There is “all of the pressure we put on [people], especially young girls, how obvious that is when you come to Miami, when you grew up in Miami, all of the emphasis on what you look like,” explained Kurzban. “I wanted to rewrite that. I wanted to bring the fun and the sexy and the confidence of Miami without the pressure to fit into the box and look a certain way. So hence, 305 outside of 305.” She hopes to one day open a studio there; before returning to her home in New York earlier this year, she led outdoor 305 classes on the boardwalk in South Beach.

Kurzban might not live in Miami anymore, but her heart remains in the 305. When asked about her favorite song to dance to, she said, “There’s a fun one, this Pitbull one, ‘Move to Miami.’” In Kurzban’s world, everyone is moving to the beats of Miami.