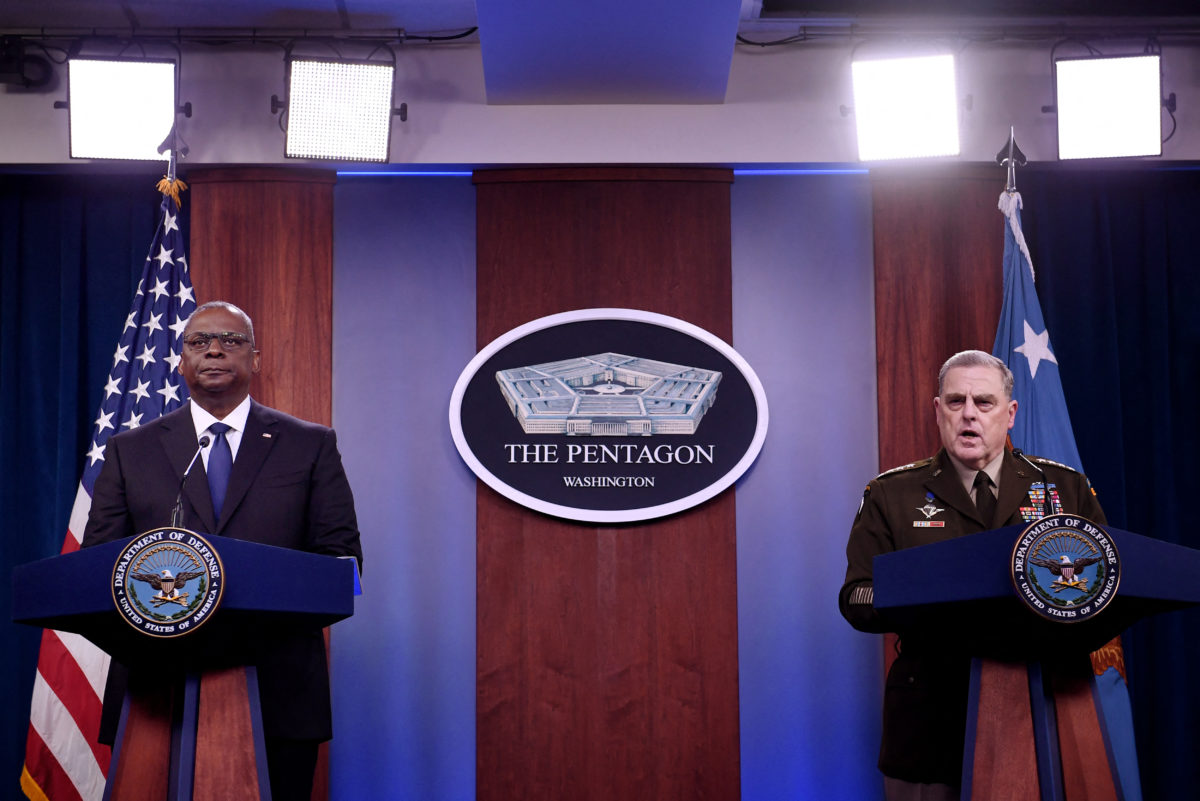 US Defense Secretary Lloyd Austin (L) and Chairman of the Joint Chiefs of Staff, General Mark Milley, hold a press conference about the situation in Afghanistan on August 18, 2021, at The Pentagon in Washington, DC.

Secretary of Defense Lloyd Austin and Chairman of the Joint Chiefs Gen. Mark Milley addressed the American public yesterday for the first time since Afghanistan’s fall to the Taliban, affirming in a press briefing the Biden administration’s commitment to evacuating U.S. civilians and partners amid widespread concerns.

After National Security Advisor Jake Sullivan repeatedly declined on Tuesday to commit to evacuating all U.S. civilians from Afghanistan — the number of Americans remaining in Afghanistan was estimated by White House Press Secretary Jen Psaki to be 11,000 — Milley offered a starkly different picture, saying “we fully intend to evacuate all American citizens who want to get out of Afghanistan” in addition to “as many [Afghan partners] as possible.”

Austin echoed Milley’s assurances, emphasizing that the evacuation mission — the second largest in U.S. military history — will continue “as long as we can until the clock runs out or we run out of capability.” According to the White House, 3,200 people had been evacuated as of Tuesday. Barring further changes, the military has an Aug. 31 deadline for its pullout from Afghanistan.

Sullivan’s comments had prompted widespread concern from lawmakers on Tuesday.

“Our top priority needs to be getting Americans, and the Afghans who helped us, out of the country,” Sen. Jim Inhofe (R-OK) said in a statement to Jewish Insider shortly after the briefing. “There was clearly no good plan for their evacuation – so the Biden administration better make one, now.”

Austin noted that the U.S. is relying on the Taliban to guarantee the safety and free passage of Americans attempting to leave the country through Kabul’s airport because U.S. forces do not have the capability to conduct large-scale retrieval operations outside the airport.

Rep. Tom Malinowski (D-NJ), the vice chair of the House Foreign Affairs Committee and a former assistant secretary of state in the Obama administration, expressed concern about this strategy in a statement to JI prior to the briefing.

“The Taliban told us they would allow safe passage of Americans to the airport. But there is no way for the U.S. government to guarantee that the Taliban will keep that pledge,” he said. “All we can do — and I hope we are doing it — is to make clear to the Taliban that they will face grave consequences if they break that pledge.”

At the briefing, the administration officials repeatedly deflected questions about how the situation in Afghanistan degraded at such a rapid pace, and how intelligence estimates overestimated the strength of Afghanistan’s forces. “Right now is not that time,” Milley said, adding that “there was nothing… that indicated a collapse of this army and this government in 11 days” and blaming the quick deterioration in Afghanistan on “an issue of will and leadership.” Some intelligence reports did indicate a collapse was likely.

Lawmakers continued to raise additional concerns on Wednesday about the U.S.’s chaotic exit from Afghanistan. Twenty-five Republican senators sent a letter to Austin expressing concerns about U.S. military equipment left in Afghanistan, some of which has already fallen into the Taliban’s possession.

Milley demurred when asked about this at the press briefing, arguing that the issue could be addressed at a later date.