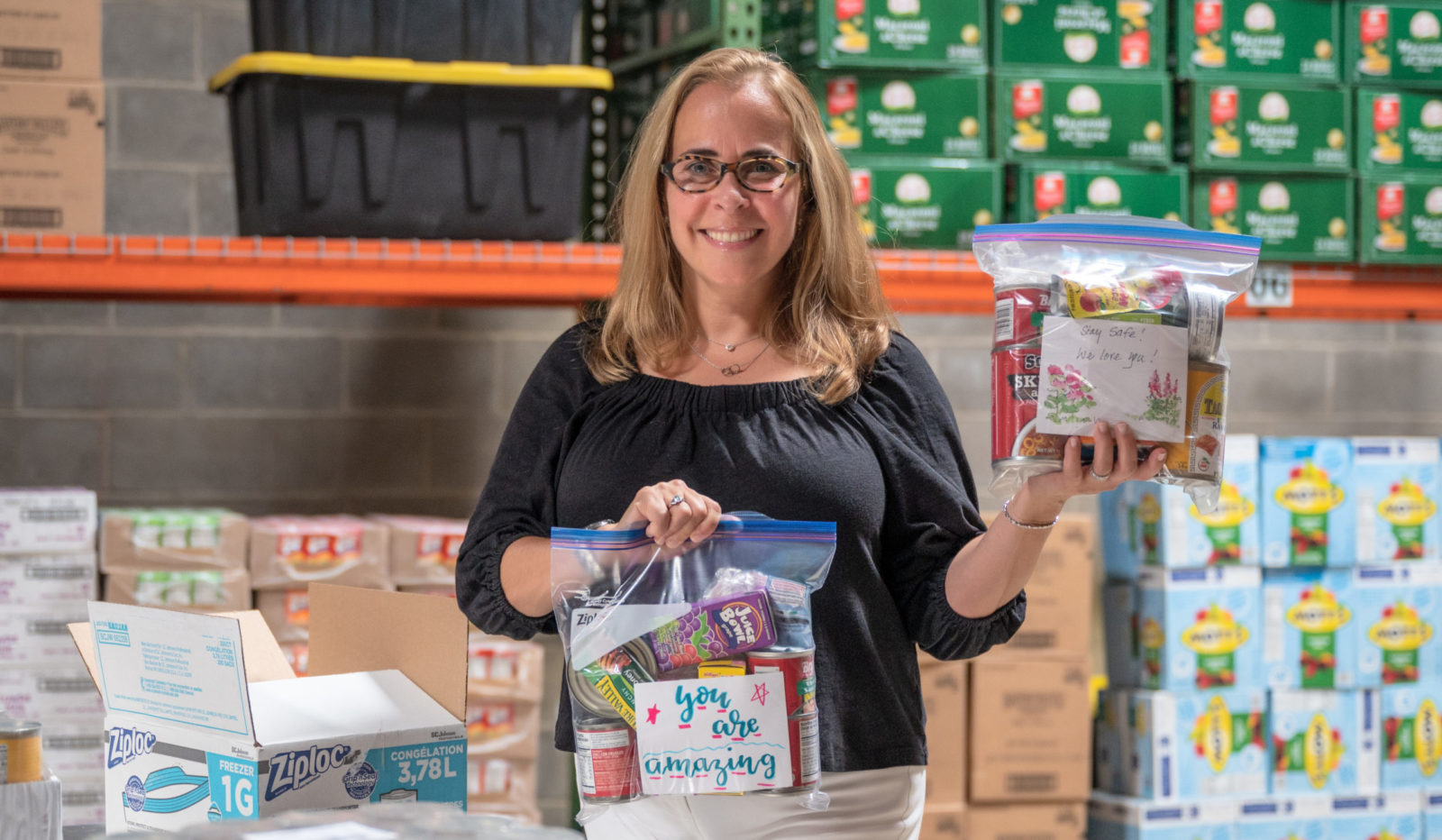 Accounting for childhood hunger in Baltimore

Lynne Kahn draws on her expertise and faith to run Baltimore Hunger Project, which feeds vulnerable kids on the weekends

It’s Friday afternoon in Baltimore City, and kids are bounding out of school, excited for the weekend. They had breakfast and lunch that day at school, but their next meal is uncertain — after 10 meals at school that week, some kids are faced with the reality that they might not get another meal until Monday morning.

And there is Lynne Kahn standing in that “hunger gap” breach, like a nutrition guardian angel. (Kids have called her the “lunch lady.”) Tucked inside the needy students’ backpacks are sandwiches and snacks provided by her expanding anti-childhood hunger nonprofit. The longtime accountant is now keeping tabs on something more precious than an average CPA’s balance sheet.

“It’s so rewarding to be able to do what you are meant to be doing,” Kahn told Jewish Insider in a recent interview from the large warehouse that her nonprofit, Baltimore Hunger Project, just moved into.

Kahn graduated from college with plans to teach English in Italy and then join the Foreign Service. But when she needed something to do while waiting for the results of the Foreign Service exam, she joined her father’s accounting firm — and never left. (She later met her husband in accounting school.)

Before starting Baltimore Hunger Project, Kahn used to organize friends to meet in her garage on the weekends to make sandwiches for local women’s and children’s shelters. “Lynne’s Garage,” as she named the project, kept her busy for 10 years, but she wanted to go bigger. In 2014, she launched her nonprofit to feed some of Baltimore’s most at-risk kids every weekend. Seven years later, Baltimore Hunger Project is a one-woman operation that raises hundreds of thousands of dollars a year and fed more than 1,000 kids over the past year.

Baltimore Hunger Project’s mission is simple — “eliminating weekend childhood hunger,” Kahn explained. “We focus on bridging the hunger gap from Friday afternoons to Monday mornings. The kids we support are the ones who receive free breakfast and lunch Monday through Friday at school. And when they go home, on the weekends, we help supplement what food they may have at home.”

When Kahn started the Baltimore Hunger Project, the organization fed 30 children. She partners with school principals and guidance counselors, who identify the students who are most in need. “We want to preserve the dignity of the kids who receive our food,” Kahn noted. “We bring the food to the guidance counselors, who then slip it into the kids’ backpacks before they head home on Fridays.”

Part of the challenge for Baltimore Hunger Project is making sure people even know about the problem they aim to address.

“Awareness is a really big thing for us. Most people don’t know that weekend childhood hunger exists,” Kahn noted. “When the schools closed, all of a sudden, it became something that people talked about, because they were recognizing how many children relied on food at school, in addition to people realizing that was the safe place for many kids.”

Now, the organization’s work is on pause for the summer, as Baltimore Hunger Project moves into a new warehouse and prepares to return to its bread and butter this fall: getting kids fed over the weekend.

Baltimore Hunger Project has come a long way from its predecessor in Lynne’s Garage, but it is still overwhelmingly powered by volunteers. The organization’s only employees are Kahn, who helms the organization full-time while still working as an accountant two days a week, and a part-time assistant. Everything else — collecting the items for distribution, putting together the food bags, delivering them to schools — is done by volunteers.

“It started out as just Lynne doing something and bringing her friends and family together to help her to do that,” said Alexis Seth, a Baltimore Hunger Project board member who met Kahn through their childrens’ PTA and was an early volunteer at Lynne’s Garage. “Lynne has a magnetism and a charisma that people are drawn to, so she easily makes connections. You will not be a stranger to her for long.”

For Kahn, this work has always been a passion; she grew up in a service-oriented family with a deep connection to Baltimore — her mother volunteered for years at a soup kitchen when Kahn was growing up — and her roots in the community kept her there even when wanderlust came calling in her 20s.

“It’s kind of a family affair,” Rabbi Steven Schwartz said of Baltimore Hunger Project. Schwartz is the senior rabbi at Congregation Beth El, a Conservative synagogue where Kahn and her extended family belong. “My sister is a regular volunteer. My niece joined us and did her senior project from high school for two months with us. My mother’s my biggest fan,” said Kahn.

Kahn’s kids connect to the work, too, even if they won’t tell her that. “It’s not like they think what I do is cool. They never say anything like that. But it shows,” Kahn stated. Her daughter spent a summer making meals for food insecure children, and this year will be living in a house at her university that focuses on food insecurity and raises money for a local food bank.

The work Baltimore Hunger Project does comes from deeply held values, and not personal experience of hunger or food insecurity. “She feels a deep responsibility, given the privilege she has, given the resources she has — I would also say her faith — guides her in her desire to help,” Seth observed.

“I think a lot of the work that she does through Baltimore Hunger Project, to me, is really kind of mitzvah-oriented work. It just comes from that place of understanding what it means to make the world a better place and the responsibility you have to do that,” Schwartz noted. “Her parents are active and engaged, involved in the shul, they come regularly. Her in-laws as well. Her kids are Jewishly connected also. It just gives you a sense of how those values get transmitted through the generations of a family.” 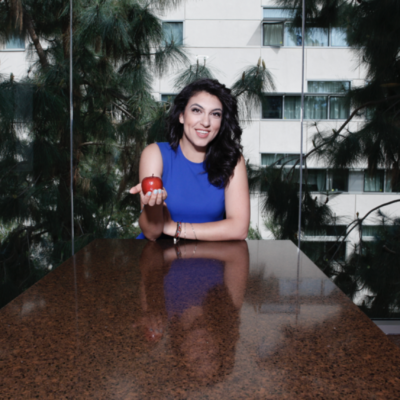 Eradicating food insecurity, one swipe at a time

Kahn grew up steeped in that same Jewish community, with weekly Shabbat dinners and summers spent at Camp Ramah in the Poconos. “Israel is a big part of who I am, too,” Kahn said, adding that she will be visiting Israel next spring with a trip through The Associated — Baltimore’s Jewish federation — to visit Ashkelon, Baltimore’s sister city, which plans to send a delegation to the U.S. in October.

“The Jewish community certainly has supported our work, for sure, both in talent and treasure,” Kahn noted. Baltimore Hunger Project has partnered with The Associated to find volunteers through the organization’s Jewish Volunteer Connection, which matches interested community members with volunteer projects.

“Since she has started, we’ve promoted the volunteer needs that she has,” said Erica Bloom, deputy director at Jewish Volunteer Connection. “We’ve matched volunteers of all ages, including b’nai mitzvah age for b’nai mitzvah projects. We’ve also created what we call an indirect service project, like an ongoing project that can be done for convenience in someone’s home or in a school, in a small group.”

Some of these projects include writing notes or cards to go in the food bags Baltimore Hunger Project gives out to children, part of a “birthday packs” project. “We have asked the community to help us put these together so that every child we support can have a birthday celebration. It’s a cake mix. It’s icing. It’s oil. It’s a birthday card, it’s candles, it’s paper plates, silverware, all put together,” said Kahn.

“Our tagline is feeding bodies and minds, which means it’s so much more than just the food,” Kahn explained. “How do we surround these children — who are like my children — with things that they need, [but] that they might not even know that they need?” Baltimore Hunger Project gave out new backpacks at the start of the summer. It also gives out toothbrushes on a quarterly basis and on occasion sends kids home with books. Last year, Baltimore Hunger Project gave everyone a new winter coat.

As the economy has begun to recover in the wake of the pandemic, Baltimore Hunger Project has seen a change. “We were noticing towards the end of our food distribution in June that our numbers were decreasing. The [number of] people who are coming for food was still significant, but it was a lot less than [it] was coming during the height of the pandemic,” Kahn observed.

But she acknowledges that even working beyond maximum capacity, Baltimore Hunger Project cannot meet anywhere close to 100% of the need in the community.

“Forty-eight percent of the students who attend Baltimore County public schools qualify for free and reduced meals, which means there’s like 50,000 students who could use our support,” she explained. “If we’re supporting 1,500 or 1,600 [students], that’s only like 3% in each school. So I would love to be able to see us support all of the kids in the school that need our help.”

Put another way: “Our goal,” Kahn stated, “would be to put ourselves out of business.”