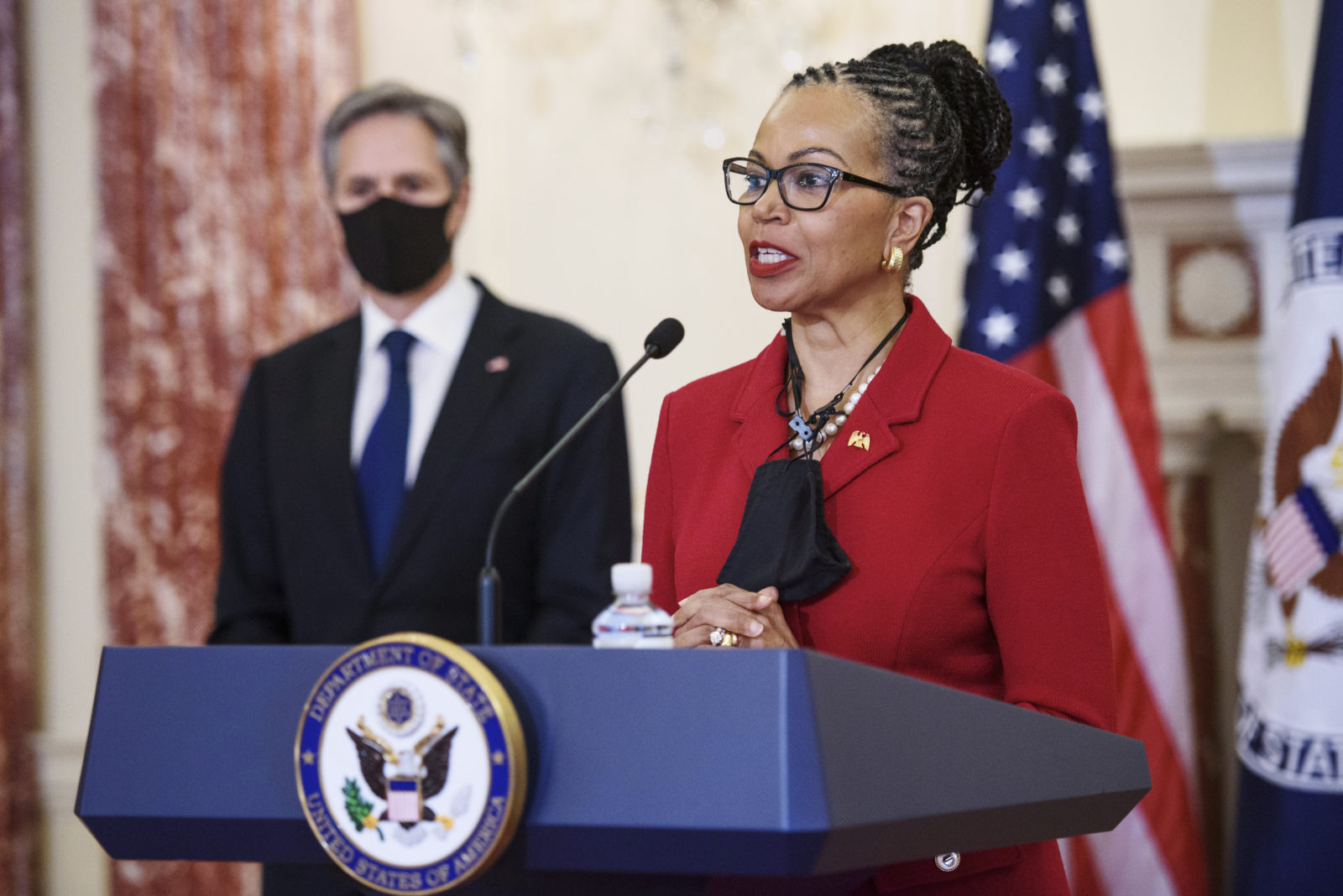 The State Dept.’s diversity officer grew up among Orthodox Jews in Cleveland

There’s a scene in Heartburn, the Nora Ephron novel based loosely on her marriage to and divorce from investigative reporter Carl Bernstein, in which a handful of people are discussing diplomacy in the Middle East. The narrator introduces the fictional “undersecretary of state in charge of Middle Eastern affairs” to her Jewish father, who then turns to him and says, “I suppose they don’t give that job to the Jews.”

The moment is meant to be humorous — it followed the narrator’s wry observations about leaving her beloved New York City for the unfamiliar world of Washington diplomacy — but it relayed a truth that, at the time the book was published in 1983, went without saying: The State Department was an exclusive place, and not all Americans were given equal opportunity to climb its ranks.

At the time, Jewish diplomats were routinely kept away from posts involving Israel or the Middle East, due to concerns that they would be loyal to Israel if conflicts arose between Israel and the U.S. That began to change by the 1990s, when President Bill Clinton appointed Martin Indyk as the first Jewish ambassador to Israel and named Dennis Ross and Aaron David Miller to other senior Middle East posts.

Of course, Jews are not the only minority group to face hurdles in diplomacy. Black diplomats have often been relegated to positions in Africa, due to an assumption that they might better relate to Africans. (A recent letter from the Association of Black American Ambassadors called on the State Department and USAID to “cease the practice of assigning African Americans predominantly to the Africa Bureau.”) Meanwhile, U.S. Rep. Andy Kim (D-NJ) recently shared on Twitter that when he worked at the State Department earlier in his career, he once “received a letter banning me from working on Korea issues just because of my last name,” even though “I didn’t even apply to work on Korea. The State Dept was proactively telling me they didn’t trust me.”

Now, the Biden administration is attempting to mediate the diplomatic corps’s lack of diversity. Last week, Secretary of State Tony Blinken named former Ambassador Gina Abercrombie-Winstanley, a Black woman who served as ambassador to Malta after three decades as a foreign service officer in postings including Tel Aviv, as the State Department’s first chief diversity and inclusion officer.

“When we fail to build a team that reflects America, it’s like we’re engaging the world with one arm tied behind our back,” Blinken said in his introduction of Abercrombie-Winstanley, 64. “And as President Biden has made clear, prioritizing diversity, equity, inclusion, and accessibility is also a national security imperative.”

In a statement to Jewish Insider, Sen. Sherrod Brown (D-OH) praised the appointment of Abercrombie-Winstanley, a Cleveland native. “Gina Abercrombie-Winstanley’s breadth of experience after more than two decades of a career diplomat, with postings in Asia, Northern Africa, the Middle East, Europe, and here in Washington, make her an optimal choice to oversee the State Department’s diversity and inclusion priorities,” Brown said.

Abercrombie-Winstanley did not respond to multiple requests for comment from Jewish Insider, but she has spoken in the past about how her experience studying abroad in Israel helped spark her interest in diplomacy. “My first two plane rides ever were to and from college” — at The George Washington University in Washington, D.C. — “and my third was to Tel Aviv,” she said in an interview with a magazine affiliated with her childhood school district. (The experience was not entirely positive; she said in the interview that she didn’t have a roommate in Israel until another non-Jewish student arrived, making her feel like an outsider. “No one else was willing to live with her, as a non-Jew or with me, as a Black girl,” she said.)

Ron Klein, a former Florida congressman and the current board chair of the Jewish Democratic Council of America, called Cleveland Heights a “very demographically mixed population. This wasn’t one of these areas that was all white or all Black.” Klein graduated from Heights High a couple years ahead of Abercrombie-Winstanley, though he did not know her, and he said it was pretty rare that a non-Jewish kid would take Hebrew. “My recollection would have been almost all Jewish kids taking the class,” Klein said, but it wasn’t entirely surprising: “It wasn’t a pristine suburban perfect place, but it was a great place to really get a good education.”

Even today, the city remains roughly half Black and half white, although many white residents left Cleveland Heights for further-flung suburbs in the “white flight” of the 1960s and 1970s. (The local Jewish federation, which was then located in downtown Cleveland, worked to keep Jews from leaving the eastern suburbs in the 1970s and 1980s, though most community institutions eventually relocated to the suburb of Beachwood, which has a larger Jewish population.)

At the announcement of Abercrombie-Winstanley’s hiring, Blinken cited a Government Accountability Office report from 2020 that found that “racial or ethnic minorities in the department’s Civil Service were up to 29% less likely to be promoted than their white peers with similar qualifications,” even after factors like education and years of service were controlled. The report also found that the share of Black Americans in the State Department’s permanent, full-time workforce decreased from 17% to 15% from 2002 to 2018.

The diversity initiative comes as the Biden administration is seeking to grow the foreign service. Blinken has spoken of staffing up the State Department’s ranks after a historic number of career diplomats and foreign service officers resigned or were fired during the Trump administration. In late 2017, just months after former President Donald Trump took office, the head of the American Foreign Service Association — the union that represents diplomats — said that the State Department had lost 60% of career ambassadors in that year alone.

Abercrombie-Winstanley was among the wave of diplomats who left the State Department early in the Trump administration. “In August, my dream assignment in the Office of Global Women’s Issues was withdrawn less than a week before my start date, and I was told, ‘We don’t want leadership for that office.’ The role remains unfilled,” Abercrombie-Winstanley wrote in a 2018 New York Times op-ed. “It has always been a struggle for minorities and women to reach our full potential in the white-male-dominated world of diplomacy. The State Department has long struggled to reflect ‘looking like America’ among our senior officer corps, and under this president the refusal to utilize the talent, experience and passion of so many people dedicated to serving our nation was heartbreaking.”

In her brief three-year stint outside of government, Abercrombie-Winstanley became a vocal advocate for increasing diversity in diplomacy. And while she has publicly expressed her frustration with the Trump administration, her comments have focused very specifically on its actions and attitudes toward U.S. diplomacy and foreign policy.

“These are some of the most patriotic people you’ll find, people who believe and live their careers in this way that transcends politics of one administration or another,” said Dan Moulthrop, CEO of the City Club of Cleveland, a local civic organization, and a friend of Abercrombie-Winstanley. “They’re so devoted to the American cause and the cause of democracy in ways that I think it’s really hard for ordinary Americans like you and me to understand because we all take politics so seriously.” He observed that this might be why her comments on Trump, and politics in general, have been so considered: “She has always been extraordinarily diplomatic.”

With a group of prominent female foreign policy practitioners, Abercrombie-Winstanley helped launch the Leadership Council for Women in National Security (LCWINS) in 2019, to provide mentorship to women entering the field and advocate for the inclusion of more women in senior governmental roles.

“The joke about the Foreign Service is that it’s ‘pale, male and Yale,’ but that’s not without some historical foundation,” said Tamara Cofman Wittes, a senior fellow at the Brookings Institution who served as deputy assistant secretary of state for Near Eastern affairs in the Obama administration and worked with Abercrombie-Winstanley to launch LCWINS.

Issues of diversity “have complex roots, and it will take a lot of work across the institution” to fix the problem, Wittes said. “Creating this position is part of sending a strong message throughout the [State] Department that this is a priority, and that it’s got to be integrated into everything the Department does,” Wittes said of Abercrombie-Winstanley’s new role.

Wittes did not get to know Abercrombie-Winstanley well until their work together on LCWINS, but at an event early last year, Wittes learned that they shared something surprising in common: “She and I went to the same overseas student program at Tel Aviv University, a few years apart. We had both done that program, we had both gone through the ulpan [Hebrew instruction] there, we both lived in the same dormitory building,” Wittes recalled. “That experience both drew us closer to the field.”

Abercrombie-Winstanley’s career centered on the Middle East and North Africa, taking her to postings ranging from Cairo to Baghdad to Jakarta. She spent a stint in Tel Aviv monitoring the Gaza Strip in the mid-1990s. Indyk, who was ambassador to Israel at the time, told JI that “she was an excellent young foreign service officer in those days.”

In the early 2000s, she became the first woman to serve as U.S. consul general in Jeddah, Saudi Arabia. She has said that the posting gave her the status of “honorary male,” since women in Saudi Arabia — particularly at the time — are often barred from working in public-facing roles. But that also allowed her to learn from women in the country: “I get to see literally half of Saudi society that my (male) predecessor did not,” she said in a 2004 interview. Later that year, Abercrombie-Winstanley survived an al-Qaeda attack on the U.S. consulate in Jeddah, going on to receive a State Department award for her courage on that day.

While working overseas, Abercrombie-Winstanley experienced racism in addition to the sexism she faced in Saudi Arabia and elsewhere. Still, she told The Atlantic last year, “It is only when I am overseas that I am truly and fully American. When I am in the Middle East or in Asia or even in Europe, I am seen as nothing but a U.S. diplomat.”