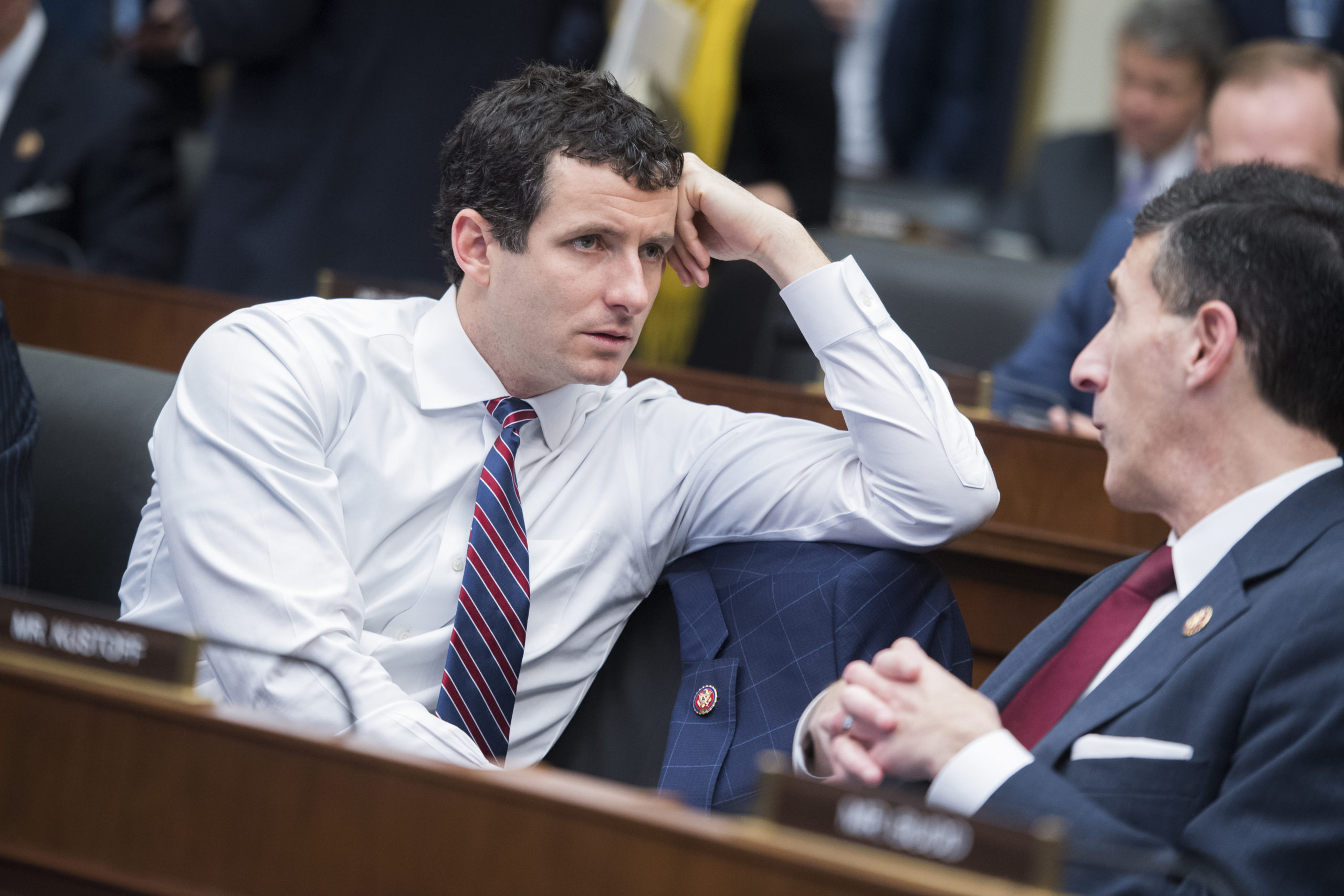 Trey Hollingsworth is for term limits — on his own terms

On January 6, after a violent mob of pro-Trump extremists stormed the Capitol, Rep. Trey Hollingsworth (R-IN) hoisted a metaphorical white flag of surrender in a video on his Facebook page.

“Many of you, most of you, want me today to vote to overturn the decision made by 160 million Americans,” Hollingsworth said as he announced that he would vote to certify the election results. “I know that most of us want to see Trump as president,” he added. “I campaigned with Trump. I voted for Trump. But Trump at all costs, including the Constitution, is too high of a cost. We must at some point say that we have lost this election.”

A disclaimer at the beginning of the video noted that Hollingsworth had recorded his message “before the events of January 6 delayed the joint session of Congress” to certify Joe Biden’s victory.

The 37-year-old congressman — who represents a largely conservative district of south-central Indiana that includes the blue-leaning enclave of Bloomington — was eager to distance himself from the rioters who had just desecrated the halls of Congress.

“There is no space in our system of government for violence or vandalism, and none should be tolerated here or anywhere in our great land,” Hollingsworth said in a statement condemning the attack.

In a mid-December interview with Jewish Insider, Hollingsworth seemed willing to accept that Biden had won the election. Asked if he would be willing to work with the Biden administration as well as other Democrats in Congress, Hollingsworth was quick to express his support for bipartisan cooperation. “Absolutely,” said the three-term Republican congressman, claiming that he has already developed a reputation as the most bipartisan member of the House Committee on Financial Services. “I am going to find places where I can compromise, where we can see an issue overlapping.”

But Hollingsworth added that there were some issues on which he wouldn’t budge, including the Iran nuclear deal. “I think we need to thoughtfully question whether Biden should reenter that deal, and then whether he has the capability to do so unilaterally without approval from Congress,” he said. Hollingsworth emphasized that he would resist rejoining the agreement “every step of the way.”

“Because fundamentally I’m opposed to it,” he said, “fundamentally I don’t believe it’s the right deal, fundamentally, I think, it emboldens instead of restrains Iranian aggression in the region, and that’s the last thing I want to see.”

Still, Hollingsworth was hopeful Biden would build on the recent normalization deals brokered by the Trump administration between Israel and the United Arab Emirates, Bahrain and Sudan. “I think it’s a real chance to build a coalition, one by one in a bilateral fashion,” he said, “that enhances Israel’s and those countries’ security and economic prosperity.”

Though Hollingsworth has never visited Israel, he said he had made a concerted effort throughout his past two terms to support the Jewish state, “trying to expand Israel’s relationships bilaterally, relationships that I hope will deepen economic prosperity, but also deepen their security in the area.”

“A lot of times people say, ‘Gosh, you know, our friendship, our support, our allied relationship with Israel is an issue that matters a lot to the Jewish communities across this country,’” he said. “But I found that that’s not the case. It matters a lot to so many communities across this country. And I’ve got a great district with a diverse group of people inside of it. But I found that this is an issue that matters all the way across all of those dimensions.”

Bob Schuckit, an attorney who serves as Indiana council chair for AIPAC, has known Hollingsworth since he first ran for Congress and collaborated with him on a position paper on Israel and the Jewish community. “He’s a true believer in the Israel cause,” Schuckit told JI, adding that Hollingsworth comes from a viewpoint that the U.S.-Israel alliance is important in terms of common values and intelligence sharing.

“I think he’s a pragmatist, and I think he sees things going on in the Middle East in a very clear light,” said Bernard Hasten, an Indianapolis businessman and pro-Israel activist.

The Jewish community in Hollingsworth’s district is relatively small, though the threat of violence looms. “For some people, these issues may be more abstract,” said Leslie Lenkowsky, a professor emeritus in public affairs and philanthropy at Indiana University Bloomington. “But for Hollingsworth, it’s real. This is in his district.” At least one of Hollingsworth’s constituents, Matthew Heimbach, a neo-Nazi agitator who helped promote the “Unite the Right” rally, was believed to have stormed the Capitol after a photo linking him to the event circulated on social media. (Heimbach denies he was there.)

Experts say Hollingsworth is unlikely to face political repercussions for certifying the electoral vote, despite the fact that Trump may still carry broad support in some sections of the state. “He will not be alone in his response, which makes him unlikely to be singled out for any kind of punishment by the party or by voters,” said Elizabeth Bennion, a professor of political science at Indiana University in South Bend, noting that Hollingsworth was joined by other members of his congressional delegation as well as both of Indiana’s Republican senators when he voted to uphold the election.

Hollingsworth’s decision to vote against Trump’s impeachment will also help insulate him from criticism. “It is the 10 Republicans who voted for impeachment who are facing backlash from within the party,” Bennion noted.

Nor will Hollingsworth be likely to face repercussions for having signed an amicus brief challenging the election results in four swing states. Hollingsworth was among 126 Republican members of Congress who signed on to the amicus brief filed by the Texas attorney general targeting Michigan, Pennsylvania, Georgia and Wisconsin. The lawsuit was summarily rejected by the Supreme Court on December 11.

Lenkowsky, a longtime acquaintance of former Vice President Mike Pence — whom the rioters singled out for payback — understood the congressman’s decision to support the Texas lawsuit as an appeal to Trump’s base. But he was disappointed nonetheless. “I sent him a note after he signed the brief criticizing that,” Lenkowsky said, adding that he received a boilerplate reply. “But then he didn’t object,” Lenkowsky said. “So he’s obviously prepared to take these folks on. The point about Heimbach is there are real threats here. I mean, these guys carry guns.”

The congressman faced accusations of carpetbagging when, in 2015, he moved to Indiana from Tennessee and immediately ran for Congress. The industrial real estate developer, however, has established an amiable rapport with voters in his district, according to Andrew Downs, a political scientist at Purdue University in Fort Wayne. “He has a reputation for relying on nontraditional communication streams with his constituents,” Downs said. “He uses social media, he sends items electronically to voters directly, and that allows him to control the message a lot better.”

Hollingsworth was unavailable for a follow-up interview with JI following the Capitol siege on January 6.

As he enters his third term in Congress, Hollingsworth said he has a few immediate goals, including reinvigorating the economy and passing legislation to institute term limits as well as lobbying bans for members of Congress.

“I would say that the American people, what I’ve seen, are rightly frustrated and fed up with a Washington that continues the status quo,” he said, “where politics instead of policy dominate, where too many people are thinking about their careers instead of thinking about how to improve the lives of Americans.”

“They’re fed up with it, they’re angry about that, and that anger existed four years ago,” Hollingsworth continued. “It existed in the best economy two years ago. It certainly has existed during coronavirus. I think that what I tell my colleagues all the time is people are tired of the political grandstanding. They’re tired of the tweets that mean nothing. They’re tired of members of Congress putting their own careers, their own fame ahead of getting real things done for the American people. That’s why I continue to be the House’s biggest proponent of term limits and lobby bans to make sure we change the way policy is made.”

The first bill Hollingsworth introduced, in January 2017, proposed an amendment to the Constitution limiting representatives to just four terms. He said he was no longer attached to the number of terms but is still devoted to the idea that there should be a fixed limit. “The important thing is knowing that there’s an expiration date,” he said, “knowing that members of Congress can’t be members of Congress forever, knowing they have to get another job again, knowing that they’ll live under the laws that they pass, knowing that, like everybody else, they have to retire with the same options that Americans have.”

“Those are the things that matter,” Hollingsworth added. “I know everybody gets, as the old phrase goes, wrapped around the axle about, ‘Gosh, what’s the right number, what’s the right number of terms,’ and what I’m focused on is making sure that whatever that expiration date is — six years, eight years, 10 years — that there is an expiration date for the length of time a member can be a member.”

If Hollingsworth sounded slightly circumspect, it may be because he is coming up on his fourth term in the House. “Like every other politician I know who has ever said they’re in favor of term limits,” said Schuckit, “it applies to everyone but themselves, and I could give you a list.”