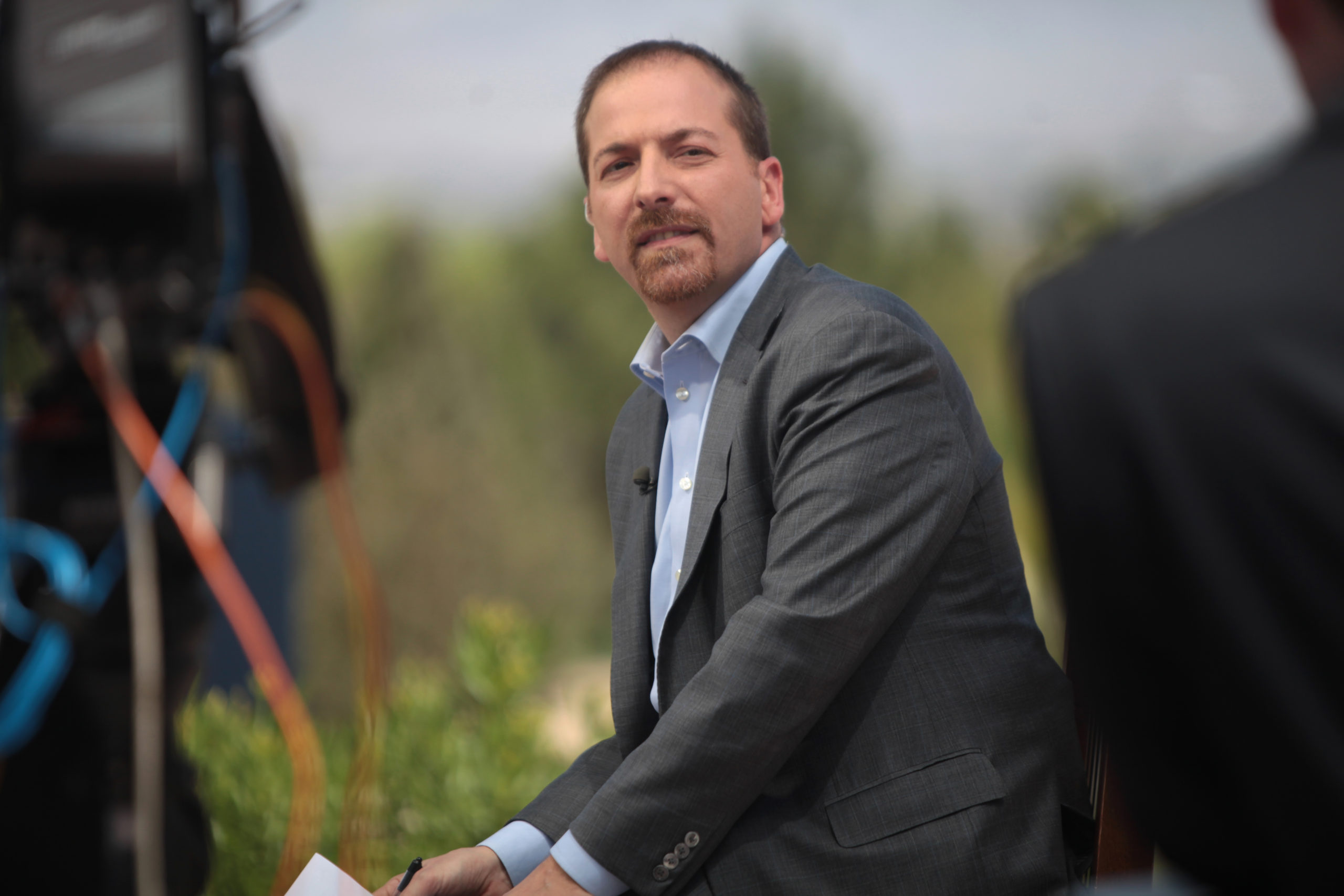 'It was the most meaningful inauguration, I think, for anybody that has lived and worked in this town for 30 years'

Chuck Todd, who moderates NBC’s long-running political program, “Meet the Press,” has covered every presidential inauguration since 1992, when he began his career in journalism as an intern at the Hotline, National Journal’s Washington tip sheet. Joe Biden’s swearing-in ceremony, he says, is one he won’t soon forget. “It was the most meaningful inauguration, I think, for anybody that has lived and worked in this town for 30 years after what happened on January 6,” Todd said in an interview with Jewish Insider on Wednesday, alluding to the deadly Capitol breach that left Washington, D.C., in turmoil.

“I’ll be frank, you spend this much time in this town, you become numb to the pageantry and the ceremony because we never had it any other way,” Todd, 48, elaborated. “It was always ceremonial, and we all knew the order of how this worked.” But the riot two weeks ago changed all that. Washington, on lockdown in the lead-up to the inauguration, had become a veritable military zone. “You suddenly feel vulnerable in what you thought was the safest city in the world,” Todd said. “That was the backdrop today. All of a sudden, every ceremonial part of the inauguration, you couldn’t help but wonder, ‘What’s the vulnerability here?’”

The proceedings went as smoothly as possible, all things considered. Still, Todd recalls a time when his adopted city was considerably more laissez-faire — and he wonders what we have lost in the process of increasing security in the capital. “When I first got here in Washington, D.C.,” he told JI, “you could drive and I think you could even parallel park next to the White House on Pennsylvania Avenue.”

Things have changed since then. “We boarded up our network’s windows, and we weren’t the only network that did this — all the networks that have a presence on Capitol Hill covered up their presence, covered the signs up with Hefty bags,” Todd said. “The question I have is, ‘How long are we going to live that way in this town?’ And that I don’t know the answer to. Is this going to be the start of where D.C. has to constantly feel on edge the way I think New Yorkers felt for a couple of years after 9/11?”

Whatever the outcome, Todd was hard-pressed to imagine a time when that tension goes away entirely. “People may feel relieved today, or they’re exhaling or whatever you want to call it,” he said. “But I can tell you how I feel. None of us believe what happened on January 6 is isolated. I mean, I hope it is. Obviously, we all hope it’s an isolated uprising that will never happen again. But what we’re seeing here, I think there’s a lot of concern that this is the beginning of a new way that D.C. is treated for a while.”

Even with that view in mind, Todd was still encouraged by the president’s inauguration speech calling for unity in an increasingly fractured political environment. “I do think that that only adds to the credibility of what he’s going to try to do,” Todd said of Biden’s appeal to bipartisan cooperation. “I don’t know if it’s going to work. But one thing about it is that I think there’s a genuine belief he’s going to try.”

“Biden’s going to want to work with Congress,” Todd added. “We haven’t had a president since LBJ who has actually looked forward to working with Congress. Don’t underestimate what that means.” Todd, who also serves as the political director for NBC News, speculated that Biden might be capable of bringing more Republicans to his side than such occasional moderate allies as Sens. Mitt Romney (R-UT), Lisa Murkowski (R-AK) and Susan Collins (R-ME). “I have this theory that in the first six months, he will find two dozen Republicans, on various issues, who he can work with.”

Asked to envision the journalistic landscape under the new president, Todd predicted that Biden’s apparent willingness to work with Congress will most likely change the way reporters seek out scoops. Though the president’s administration is expected to be a much more disciplined vessel than Trump’s leaky ship, there are ways to bypass tight-lipped presidential staffers, according to Todd.

“One of the hallmarks of the Obama years is it was easier to almost cover it outside in,” Todd said. “It was harder to cover it inside out because they were a tight unit. Not to say that there weren’t plenty of ways to report from the inside. I was inside being a White House correspondent. But it was always a lot easier to report on the White House through Congress.”

That precedent will serve reporters well, Todd suggested, as they cover the Biden administration. “If you’re a reporter in this town, the best White House scoops are going to come off from Capitol Hill,” he said. “As we all know, Capitol Hill isn’t as tight of a ship as the White House, now is it? So you’ll have that.”

Still, Todd is hopeful that Biden, who has appeared on Meet the Press a number of times in the past, will make himself available to the news media. “There’s a couple things that they can learn from Trump both on what to do and what not to do,” he mused. “One thing that they ought to learn from Trump is that, don’t have one story a day, don’t have one item a day that you’re trying to push or do, don’t get stubborn like that. Flood the zone, because you might get more accomplished if you do that. But the other thing is, be careful. I do think Trump’s words became meaningless. I can’t tell you the day they became meaningless, but you know what I mean?”

“If you worked or lived in Washington,” the past four years were “a bit traumatic in different ways,” according to Todd, who was often singled out for ridicule by the former president. Not that he worried too much about Trump’s taunts. “Look, I’m a big boy. That’s fine,” he told JI. “In some ways, I got numb to it,” Todd added. “But my family didn’t.”

Todd described his chaotic experience bearing witness to the Trump years on national television as akin to a non-stop roller coaster ride. “The closer you were to covering him, the more unstable it always felt,” he said. The ride stopped, he said, not on inauguration day but when Trump’s Twitter account was suspended, leaving the former president without his most powerful megaphone in his final two weeks in office.

“It finally stopped and it’s like, I’m finally off the ride, I’m not going to throw up anymore,” Todd said. Finding his bearings, though, could take some time. “You might still be trying to steady yourself, and I do think a lot of the press corps feels this way.”

The inaugural proceedings, despite the ominous militarized backdrop, appear to have helped Todd find his balance, even if only temporarily. “I just felt like I sat up straighter paying more attention to every little part of this inauguration,” he said. “It’s not as if I never did, but it was like, you just didn’t want to take it for granted.”