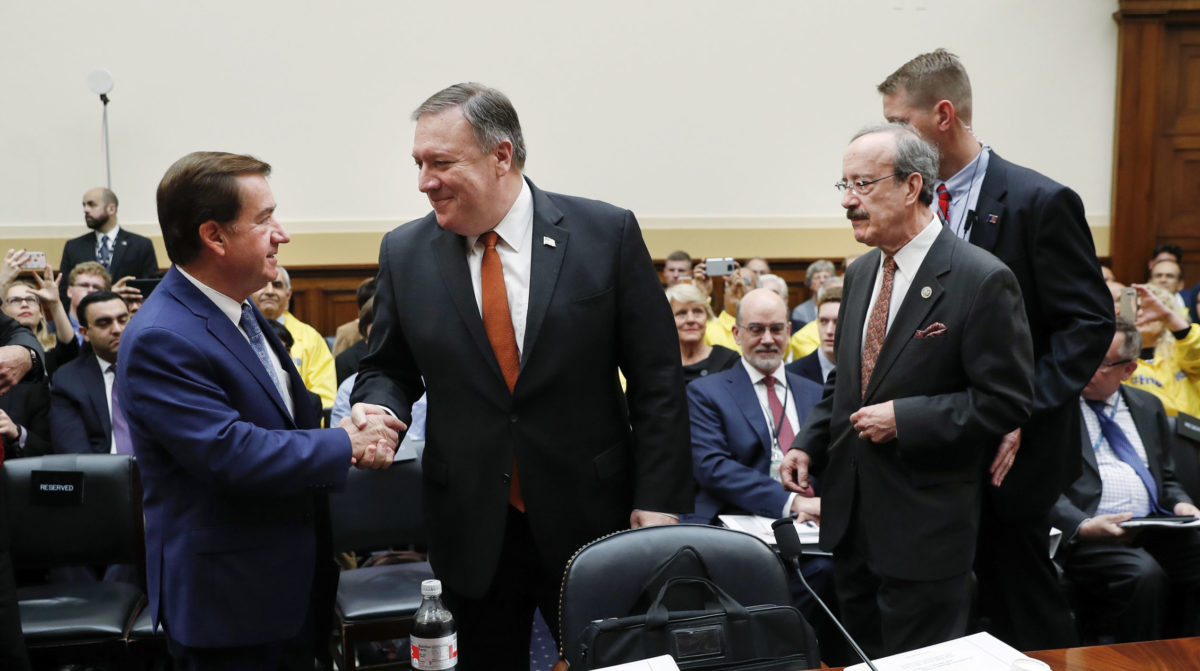 Former chairman of the House Foreign Affairs Committee Ed Royce (R-CA) praised an agreement signed at the State Department last week that ensures Sudan will pay $335 million to the families of the Americans killed in the 1998 bombings of the U.S. Embassies in Kenya and Tanzania in exchange for being removed from the list of states sponsoring terrorism.

The agreement — signed Friday and announced on Monday — is part of a normalization deal between Sudan and Israel facilitated by the Trump administration. The compensation has been put in an escrow account pending the rescission of Sudan’s State Sponsor of Terrorism designation and congressional legislation that would restore its immunities to the country’s new transitional government.

Sen. Bob Menendez (D-NJ), the ranking member of the Senate Committee on Foreign Relations, has threatened to block the legislation if the deal does not also address claims against the African nation from victims of the September 11 attacks.

In a recent interview with Jewish Insider, Royce, who served as chairman of the House Foreign Affairs Committee until his retirement in 2018, called the agreement “an extraordinary diplomatic achievement” for the Trump administration “and for the national security interests of the U.S. But also a measure of justice for the families that have waited over 20 years for this day to come.”

Royce, who now serves as policy director at the Brownstein Hyatt Farber Schreck law and lobbying firm representing the families of the 1998 bombing victims, warned of an “unfortunate outcome” if Congress does not seize the moment to sign off on the agreement’s implementation.

“Sudan says they won’t hold that money indefinitely for the victims and the family members of those who lost their lives in the attacks,” Royce explained. “So there is urgency here because we know that when there’s a window of opportunity like this, and you have our national interest, our sense of justice to the victims, as well as our relationship with our ally all on the line, you want that to be front and center of the attention that the Senate will give to this issue. The clock is ticking.”

Edith Bartley, whose father and brother were killed in the embassy bombings and is now a spokesperson for the families of the bombing victims, said in a statement, “With so much at stake for our families — as well as for our national security and that of our regional allies — lawmakers cannot let this long-sought agreement fall victim to legislative gridlock and quibbling.”

Royce also expressed concern that if the deal falls apart, the progress made on diplomatic relations between Israel and Sudan could be at risk. He also warned that a delay could push Sudan to draw back and strengthen its relationship with Iran, pointing out that Sudan served for years as a route for the transfer of weaponry from Iran to its proxies in the Middle East, including to Hamas in Gaza.

“The fact [is] that now, instead of being an ally for Iran, we have a government which is hostile to the actions that Iran took, starting with the intelligence services in Iran that helped undermine and overthrow that government 30 years ago,” Royce asserted. “And so this is of enormous significance in terms of changing the momentum that we’ve seen reversing in the region against Iran. This is something that I’m hopeful every member of the Senate looks at as they finalize this agreement.”

Royce added that the deal is an interest of all of America’s allies in the region, who expect to see Iran isolated and is a process that “would bring stability to the region.”

“This is not the end of this process,” he continued. “This is the beginning of a process that we know is in motion, because of the communications we receive from other governments that are looking and watching. All of this is on the line and that’s why we must continue the moment.”

Royce also commented on the retirement of his successor at HFAC, Rep. Eliot Engel (D-NY), who was defeated by Jamaal Bowman in the Democratic primary. “I believe that Eliot Engel kept his eye on the ball throughout his entire career, focused on foreign affairs and was deeply committed to seeing what could be done to bring an architecture of stability that would generate economic prosperity around the world, and peace and security around the globe,” Royce said. “And I believe he accomplished a tremendous amount through this commitment he had in his nearly 30 years in the Congress. I think many of us are going to miss Chairman Engel when he retires. I will, and I know many of his colleagues will, and I know many of those who take foreign policy seriously will deeply miss him as well.”