In ‘The Orchard,’ a Talmudic tale serves as a coming-of-age parable 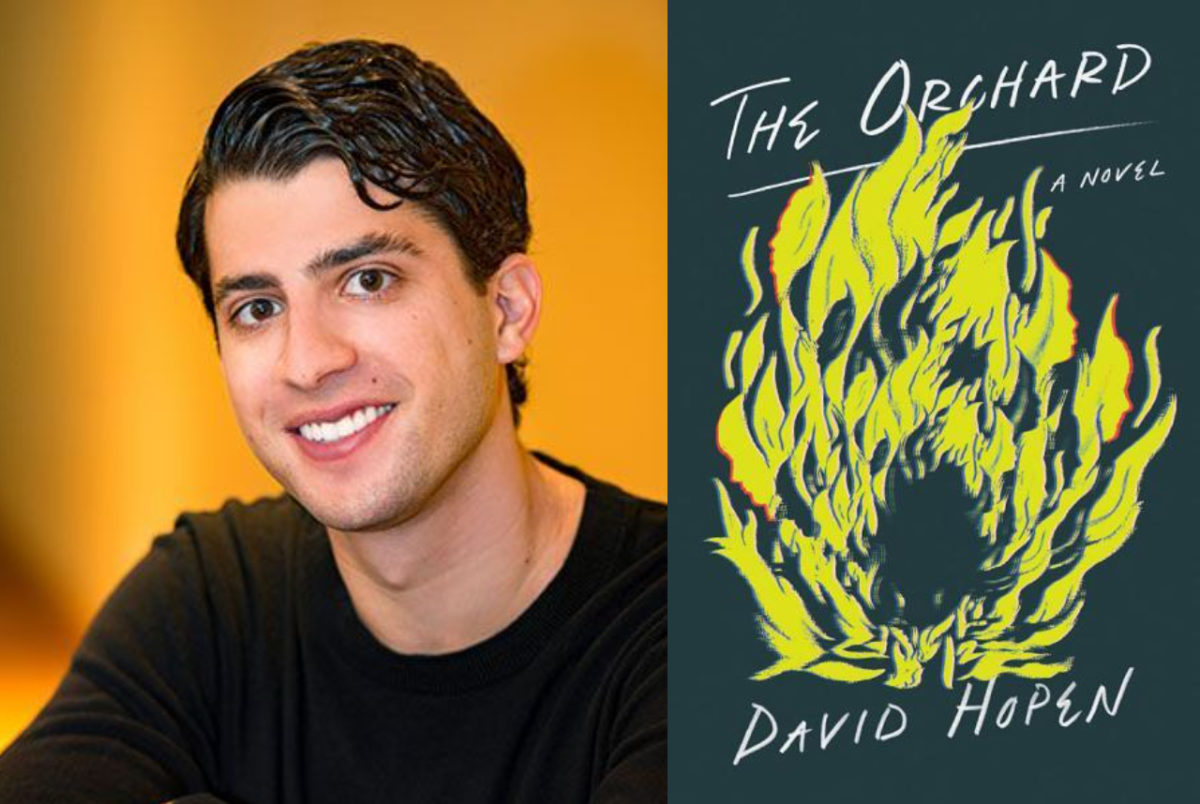 Author David Hopen and his new book, 'The Orchard.'

Ari Eden is a religious teenager struggling to acclimate to his new surroundings after his family moves from an ultra-religious community in Brooklyn to a wealthy Miami suburb.

In that respect, the character couldn’t be further from his creator: first-time author David Hopen, a Yale Law School student — and South Florida native — whose book, The Orchard, hits shelves today.

The Orchard takes the classic coming-of-age story and adds a Talmudic twist, following Eden as he moves from his religious community in New York and settles in with a crowd of rebellious teenagers at his new school in the fictional town of Zion Hills, a less observant and more opulent South Florida Jewish community.

Hopen, 27, insists that the book is not meant to be a fictionalized version of his life or his community. Writing the novel was an opportunity to reflect on the insular world in which he had grown up, something he felt his friends and fellow community members were often unable to do. When he left for college, he experienced what he described as “culture shock,” but gained the distance to reflect on his relationship with his community.

“It’s something you almost take for granted at first, for instance that you are spending half the day studying Jewish texts, Judaic classes, engaging in prayer, then going in the second half of the day to rigorous secular classes and partaking very much in the greater secular cultural world,” Hopen said. “That was something that started to interest me as an avenue worth exploring in fiction.”

HarperCollins, the book’s publisher (via the imprint Ecco), describes The Orchard’s main character as a “devout Jewish high school student whose plunge into the secularized world threatens everything he knows of himself.”

Writing the book was also a coming-of-age journey for Hopen — who grew up in an opulent (and real) South Florida modern Orthodox Jewish community. He started writing the book while a senior at an Orthodox Jewish high school in Boca Raton, and continued the project throughout a gap year at a yeshiva in Israel, his undergraduate studies at Yale College and a master’s degree at Oxford.

Growing up, Hopen said, “I felt that I was in a particularly interesting subculture in America that I didn’t see reflected in a lot of literature.” As Hopen sees it, modern Orthodox Judaism is “its own fascinating and very beautiful experiment within America.”

“When it works the way it’s designed to,” he explained, “it is a very compelling synthesis of a way to center a meaningful life on community and on foundational beliefs without sacrificing participation in the greater modern world.”

The book is Hopen’s attempt to introduce a broad audience of American readers to the modern Orthodox community, using teenage protagonist Eden, to enable readers to ask big questions about faith and the quest for meaning in the modern world. So far, he appears to be hitting his goal — ahead of the book’s release today, it landed on The New York Times’s list of “New Books to Watch For in November.” At the top of the list is Barack Obama’s memoir.

Although the book is meant to appeal to a wide audience, it does not dumb down its references to Judaism. “There are Hebrew phrases scattered in. But I think they’re very much contextual,” Hopen explains. The book also touches on “parts of the Western canon and just other cultural references,” part of Hopen’s decision to write a book “that could appeal to everybody who is interested in a thoughtful read that gets into questions that I think are faced by anyone involved with faith in an increasingly secular world.”

The Orchard uses a Talmudic myth, Pardes, to guide the novel’s narrative. In the Talmudic tale, four rabbis enter an orchard (‘pardes’ in Hebrew), and each comes face to face with God. As Hopen put it, all four rabbis were “irreversibly changed” by the encounter — some for better, and some for worse.

Hopen transposes this story onto his characters. After his family moves to Florida, Eden lands in a social circle of ambitious and defiant boys, who “begin conducting unconventional and increasingly dangerous moral experiments,” Hopen explains.

It’s a traditional coming-of-age story in an entirely new setting, and Hopen isn’t shy about his ambitions for the novel — he wants it to entertain readers and stick with them long after they’ve read the last page, as well as guide them to think about how to find meaning in their own lives.

“That question has become particularly more acute in the wake of the last six to eight months, given COVID and given just the current American landscape,” Hopen said. “I think people are increasingly interested in those bigger questions and are turning to faith or other kinds of communal structures just to think about those questions.”

Hopen first began writing fiction as a child, producing “binders and binders full of fantasy epics” that he forced his parents to read. The Orchard began as a pet project during his senior year of high school, which he continued as an undergrad in his spare time, taking breaks from English papers to write a few pages here and there. By junior year — four years after he started writing the book — Hopen had 100 pages, and, finally, a serious mentor who helped him figure out how to move it forward. In a one-on-one writing tutorial with National Book Award winning-author Susan Choi, Hopen began to approach his book more seriously, which began with turning out pages more consistently. He had a draft of the book by the time he graduated, and got an agent soon after, while studying for his master’s at Oxford.

Recently, he’s been juggling law school classes with virtual book talks and interviews, moving from a civil procedure seminar on Zoom to a book event “in” Ann Arbor. Everyone is telling Hopen how frustrating it must be to have to skip the book parties and the glitzy events that come with a much-lauded debut novel. But to speak to groups across the country without leaving his desk in New Haven is a “bright part” for him.

More than anything, Hopen is excited to see a project that he worked on throughout the most defining years of his life finally enter the world. “It already feels like I’ve grown old with this book, but now it feels like there’s this new life and people will experience it for themselves,” Hopen says. “Books are meant to be read.”

Hopen isn’t concerned about scrutiny from the Orthodox world; ultimately, he views The Orchard as a loving tribute to his community. “The book is very much not intended to operate as any sort of critique or as a way of exposing something,” says Hopen, who remains a practicing Orthodox Jew. “It’s, in my opinion, something that is affirmative and sheds actually a very positive light on what I think is overall a beautiful way of living.”