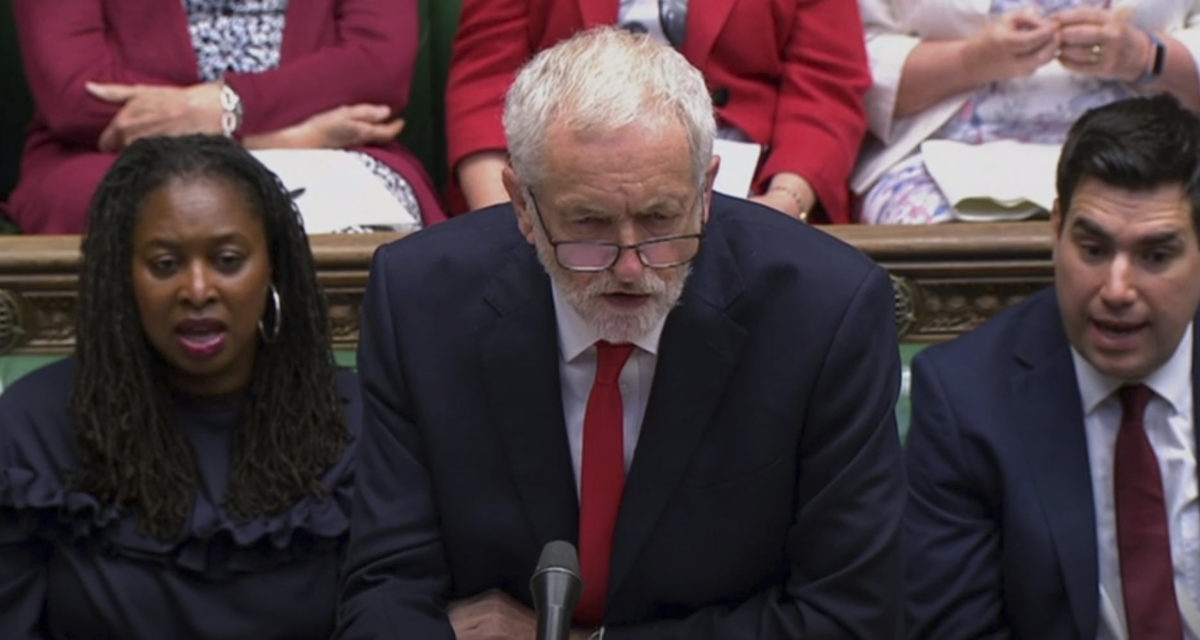 Former U.K. Labour leader Jeremy Corbyn was suspended by the party on Thursday for rejecting the findings of a long-awaited report by the Equality and Human Rights Commission (EHRC) that found “unlawful acts of harassment and discrimination for which the Labour Party is responsible.”

The report detailed numerous instances of unlawful behavior, examining at least 70 complaints of antisemitism made since 2016.

In a press conference following the release, current Labour leader Keir Starmer accepted the findings, calling the report “comprehensive, rigorous and thoroughly professional.” Apologizing to the Jewish community, Starmer admitted: “I found this report hard to read and it is a day of shame for the Labour Party… On behalf of the Labour Party, I am truly sorry for all the pain and grief that has been caused.”

The EHRC report, which concluded the party “at best, did not do enough to prevent antisemitism and, at worst, could be seen to accept it,” directed a series of changes to Labour’s reporting and investigation process. Under U.K. law, the mandates of the non-departmental government agency are legally enforceable.

In a statement, Gideon Falter, CEO of the Campaign Against Antisemitism (CAA), which submitted one of the first complaints to the EHRC, called the report “groundbreaking.”

“The EHRC’s report utterly vindicates Britain’s Jews who were accused of lying and exaggerating, acting as agents of another country and using their religion to ‘smear’ the Labour Party. In an unprecedented finding, it concludes that those who made such accusations broke the law and were responsible for illegal discrimination and harassment,” Falter continued. “The debate is over. Under Jeremy Corbyn’s leadership, the Labour Party became institutionally antisemitic. It drove almost half of British Jews to consider leaving the country.”

In addition to finding a persistent culture accepting antisemitism, the report found that the party had a “practice or policy of Political Interference” in responding to internal reports of antisemitism. This included efforts to “smear” complaints as fake, incidents which the EHRC found to have violated the Equality Act of 2010.

Complaints of antisemitism first emerged not long after Corbyn’s election as Labour leader in 2015. A left-leaning longtime backbencher, Corbyn rose swiftly through the party’s ranks following the resignation of former leader Ed Milliband. The allegations of antisemitism continued through Corbyn’s time as opposition leader, resulting in the resignation of numerous high-ranking Labour MPs, who accused him of harboring antisemitic views and protecting others accused of antisemitism. The controversy was a major campaign issue during the 2019 parliamentary election, which Labour lost. Corbyn eventually resigned following Labour’s landslide defeat.

Starmer, who previously served in Corbyn’s shadow government, skirted calls to punish the former party leader after succeeding him earlier this year. On Thursday, Starmer, in response to repeated media questions, again refused to criticize his predecessor, calling the findings of the EHRC a “collective failure of leadership.”

Corbyn, however, appeared far less accommodating. In a statement released on Facebook, Corbyn — while denouncing antisemitism — claimed “the scale of the problem was also dramatically overstated for political reasons by our opponents inside and outside the party, as well as by much of the media.”

The comment appeared to be the last straw for the Labour leaders who were already found by the EHRC to have unlawfully smeared and minimized complaints of antisemitism. Shortly after Starmer finished answering media questions — and reportedly after the Labour leadership failed to persuade Corbyn to retract his statement — a party spokesperson announced the suspension of the former leader pending an investigation.

The suspension sent shockwaves across the U.K. and U.S., where progressive politicians, including Sen. Bernie Sanders (I-VT) and Rep. Alexandria Ocasio-Cortez (D-NY), had previously praised Corbyn. Neither Sanders or Ocasio-Cortez responded to a request for comment, but shortly after news of the suspension, the Democratic Socialist Party, of which the New York representative is a member, tweeted a message of support for Corbyn.

In his remarks, Starmer urged Jewish Labour members, including Louise Ellman and Luciana Berger, to return to the party after having been “driven out.” Neither Ellman nor Berger, who acknowledged speaking personally with Starmer, indicated if they would rejoin the party.

In a statement, Ellman called the report “devastating.” Calling for the party to create an independent investigations system and adopt the IHRA’s working definition of antisemitism, the former MP added, “It is only by facing up to the enormity of what has happened and adopting these measures that the Labour party can be a safe place for Jewish people and a truly anti-racist party.”