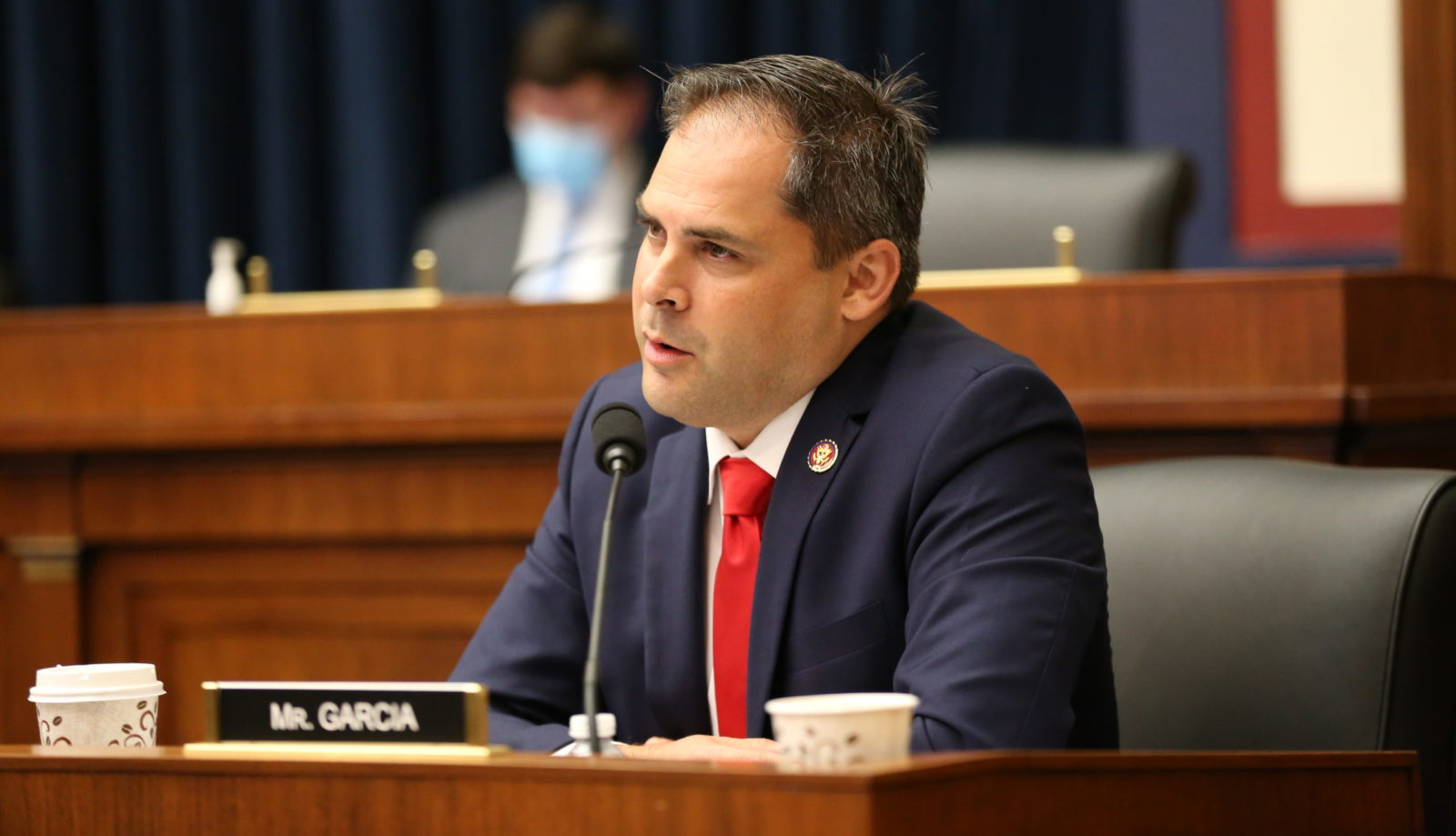 Mike Garcia is hoping he can hold on past November

The California congressman won a recent special election by a comfortable margin, but he is facing a more challenging rematch in the fall

Mike Garcia announced his plan to run for Congress in April 2019. He thought he would be competing in the November 2020 election against Katie Hill, the former representative who unseated a Republican incumbent and flipped her district last cycle as part of a wave of new California Democrats. But Hill resigned only 10 months into her term, after she became embroiled in a House ethics scandal.

Instead, Garcia ran in the special election to replace Hill, advancing to the May runoff in which he defeated Democratic State Assemblywoman Christy Smith by 10 percentage points and turned the district red again.

“I didn’t imagine myself taking office until next January when I started this journey,” now-Congressman Garcia told Jewish Insider in a series of recent interviews. “As far as I’m concerned, we’re seven months ahead of planned schedule.”

Not that Garcia, 44, is getting complacent. The former Navy pilot-turned-defense contractor, who assumed office on May 19, made clear that he is still very much in campaign mode. He is readying himself for a challenging rematch against Smith in the general election as he takes on what he described as a backlog of casework in the 25th congressional district, which includes most of northern Los Angeles County.

“We’ve been running effectively all year,” he said.

Although Garcia won by a considerable margin in May, The Cook Political Report has ranked the race a toss-up. Garcia is a staunch supporter of President Donald Trump, whose sagging poll numbers could affect the congressman’s chances in a state Trump lost by 30 points in 2016.

“There is likely to be a vastly different dynamic in November compared with a low-turnout special election,” said Mark A. Peterson, a political scientist at the University of California, Los Angeles.

Still, the Republican incumbent is in a relatively strong position as he braces for the fall. He has managed to outraise his opponent by about $1 million, having pulled in nearly $4.5 million, according to the Federal Election Commission.

In the runoff, Smith earned the endorsement of Barack Obama and had the backing of the powerful Democratic Congressional Campaign Committee, but still failed to best Garcia — an outcome that suggests some weaknesses, said Richard Fox, a professor of political science at Loyola Marymount University.

“On paper, she looks like a perfect candidate,” he told JI, “but she didn’t raise money very well.” Garcia, on the other hand, is an ideal contender, Fox said. “He’s like a dream profile for some Republicans in a district that’s increasingly Latino.”

Garcia, who is of Mexican descent, believes that his experience flying combat missions in the Iraq War prepared him to become a representative earlier than expected.

“This is where my background and what I’ve done in the past was a bit of an advantage, just being able to come quickly up steep learning curves in complex environments,” said the freshman congressman, who recently joined the Committee on Transportation and Infrastructure along with the Committee on Science, Space, and Technology as he settles into his role on Capitol Hill.

His priorities in Congress, he told JI, include immigration, national security and investing in the military, among other things. He believes that Trump has been unfairly maligned for his foreign policy initiatives, praising the president’s efforts to combat ISIS along with the decision to assassinate Iranian Gen. Qassem Soleimani in January. “It was a valid kill,” he said.

Garcia argues that stability in the Middle East is a “reasonable” expectation and supports a drawdown of U.S. troops in the region.

“Peace in the Middle East is a longer-term goal and expectation, but I think there is a realistic near-term opportunity for stability in the Middle East,” he said. “I don’t know that that requires the U.S. to be as present as it has been over the course of the last, I’ll call it, 30 years. It certainly does involve investment and continued partnership with Israel in order to maintain, or to achieve and then maintain, stability.”

“The U.S.-Israel relationship is still and will likely be, for as far as we can tell, the most critical alliance that this world has right now,” said Garcia, who endorses Trump’s Middle East peace proposal even though the Palestinians were not directly involved in its conception. “I think it’s a positive move forward as long as the Palestinians can see the value in it as well and honor it.”

Garcia told JI he has a close relationship with the president. “He was very supportive in helping us get elected and he was gracious enough to host my family and I in the Oval Office after I was sworn in,” he said. “So he’s a supporter of mine. I’m a supporter of his as well, and I think what he’s done for Israel is unprecedented.”

The congressman’s faith in Trump may be genuine, but the president has lost the faith of even some of his most faithful party devotees, who accuse him of bungling his response to the coronavirus pandemic.

Garcia, though, thinks Trump has been treated unfairly.

“I don’t think he’s being negligent at all,” said Garcia, adding, “This is uncharted territory. For someone to sit on the side of the river and throw spears at the folks that are in the boat rowing as hard as they can to get us through this challenge and this pandemic is a little sanctimonious.”

Meanwhile, Garcia is focusing on making his case to constituents as well as he can during the pandemic, which has eliminated the possibility of traditional door-to-door campaigning.

So has Smith. “Though these times have undercut our ability to interact with voters in person, our mission to elevate their voices and concerns remain our main focus,” Danni Wang, Smith’s campaign communications director, told JI in an email, accusing Garcia of being “just another out-of-touch businessman-turned-politician.”

Garcia, though, believes he’ll have enough time to prove himself in office come November.

“It obviously is an advantage to be the incumbent heading into November, and we’re going to do everything we can to execute, and represent the people,” said Garcia. “But this is definitely unusual — definitely a special election, special being the operative word.”