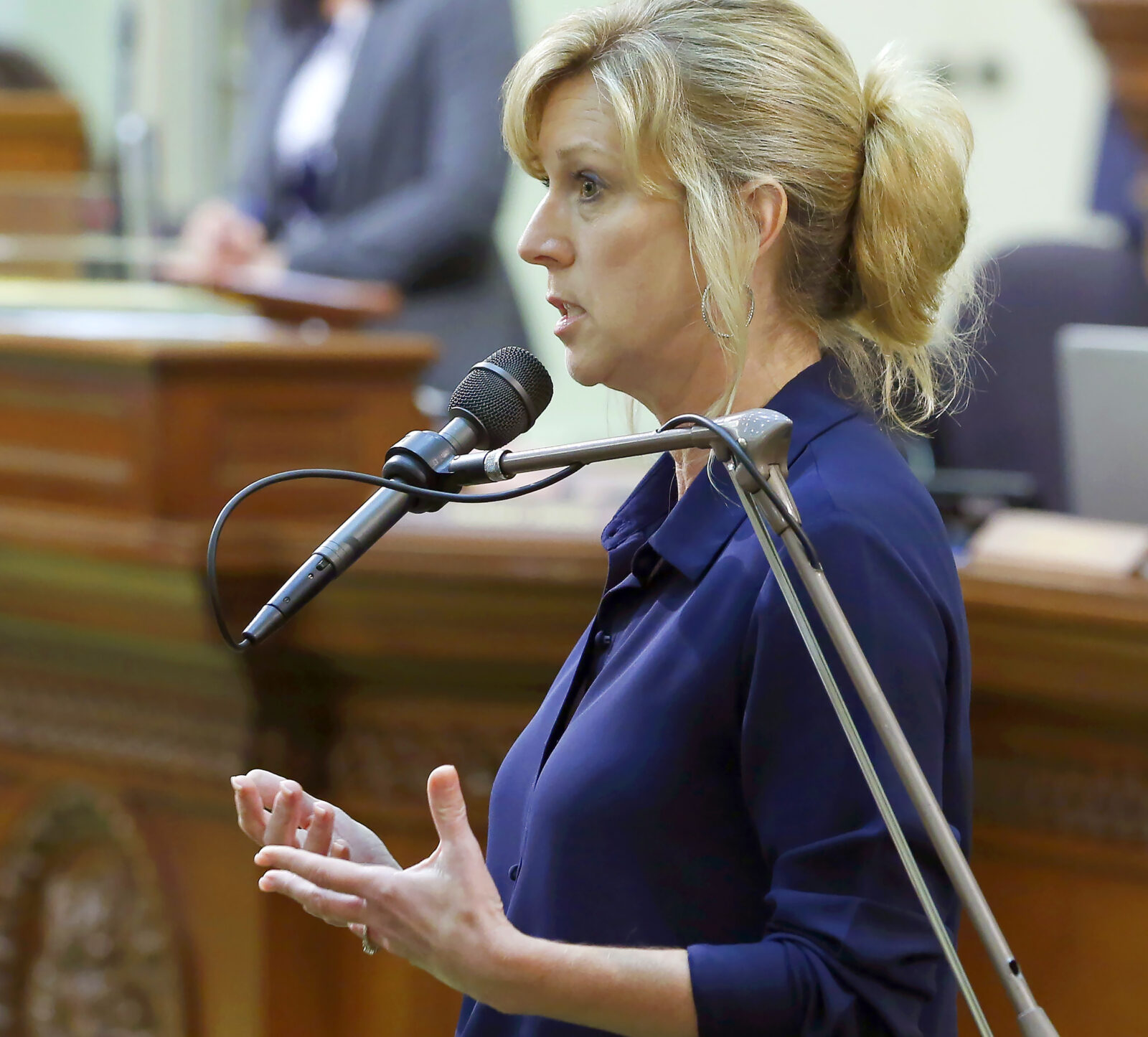 The ‘mom of Democratic politics’ in CA-25 aiming for Congress

Christy Smith helped swing the district blue in 2018. Will she be its next representative?

Two weekends before California’s Super Tuesday primaries, Assemblywoman Christy Smith sits in the auditorium of Eastside High School in Lancaster, California. Smith is listening to a woman on stage discuss the stroke she had at age 29, shortly after giving birth to her first child. “I had pre-eclampsia,” the woman says. “Combined with my already high blood pressure, I had a stroke.”

After listening to several speakers, it’s Smith’s turn to introduce herself on stage. “I am also a mom who had pre-eclampsia, so thank you very much for sharing that story,” Smith begins, before listing legislation she helped pass as part of the Women’s Caucus in the California State Assembly.

Today’s visit to the health expo is part of Smith’s larger strategy in the Antelope Valley, a region in the high desert northeast of Los Angeles. “She is here to listen,” Kunal Atit, Smith’s deputy campaign manager, tells Jewish Insider. As an assemblywoman for the 38th State Assembly district, Smith represents the Simi and Santa Clarita Valleys — roughly 58% of California’s 25th congressional district, which Smith hopes to represent in Washington. The Antelope Valley — “where most of the diversity is in the district,” Atit said — presents a whole new voter base for Smith. The Antelope Valley’s unemployment rate is around three times higher than that of Santa Clarita and Simi Valley; Lancaster’s population is nearly 22% Black, whereas Simi Valley’s population is about 1% Black.

Over the past four months, Smith has raced to build name recognition in these communities and understand the unique issues facing voters here. The brief campaign window follows the resignation of Rep. Katie Hill (D-CA) from her seat in Congress after her ex-husband accused her of having an extramarital affair with a male campaign staffer, which resulted in an investigation by the House Ethics Committee. Hill denied the claim, but later admitted to an “inappropriate” relationship with a female campaign aide. Hill resigned at the end of October, and Smith — a longtime friend of the congresswoman — announced that she would run to fill the vacancy in the March 3rd special election.

Hill quickly threw her support behind Smith, telling The Huffington Post, “there’s no one else that I could even think of that I would want to run for this,” adding that Smith is the “the mom of Democratic politics” in the district.

It’s a title Smith accepts with a gracious laugh. It was Smith’s strategy that helped build Democratic momentum and ultimately flipped both the State Assembly seat she won and the congressional seat Hill won in the 2018 midterms. “In surrounding districts, all of which have had safe Democratic seats for so long, there was this activism that was just waiting to be tapped into,” the assemblywoman explains. “So I started, in 2015 and 2016, going to countywide meetings, and going to other clubs and organizations and saying, we could use your enthusiasm, your investment, and support here in the 25th district.”

Hill’s landmark win drew the attention of the national Democratic Party, and was heralded as part of the blue wave that swept the midterms. With Hill’s resignation less than a year later, the eyes of both national parties are now back on the district, and a host of new hopefuls have entered the race. Among the new competitors is far-left progressive Cenk Uygur, who created the political talk show Young Turks.

Uygur received an endorsement from Sen. Bernie Sanders (I-VT) in December, but the support was quickly retracted after misogynist and anti-Jewish and Muslim comments made by Uygur on his talk show surfaced.

In a 2012 episode of The Young Turks, Uygur stated that conservative Orthodox Jewish men and Muslim women were “wasting their lives” — a claim he recently defended, stating “I believe the things they believe are not correct.”

Despite his comments, Uygur has the potential to capture some of the more progressive voters in the district who see Smith as too moderate. The assemblywoman pushed back, calling Ugyur’s “nod to the progressive movement” more of a marketing ploy, “because he has a very troubling history of saying things that are anything but progressive.”

“Politics is politics, right?” Smith said, shrugging off the NRCC leak. She does worry, however, that despite the polling numbers, Democratic turnout for the expected May 12 run-off election will be low. “We want to ensure that our turnout is robust and that we get the numbers that we need to hold onto the seat,” she continued, adding that party leaders in Washington view her race as a “great predictor of whether or not we can hold the House in November.”

After returning from Lancaster with Smith to her campaign headquarters in Santa Clarita, Jewish Insider sat down for an interview with the assemblywoman, and the conversation shifted to concerns facing the Jewish community.

Smith acknowledges the rising trend of antisemitism and xenophobia in America today. “It’s something that we’re mindful of going into this election season — how front of mind it is for so many people that antisemitism, racism, anti-immigrant sentiment are all so closely tied in to what’s happening now,” the congressional hopeful said. “And it is that collective concern that I think we all have, whichever of those communities you identify with, that we acknowledge we need to be going in a different direction.”

One of the few bills Smith introduced to the State Assembly — legislation creating parity for victims of human trafficking to receive compensation — was crafted in partnership with Bet Tzedek Legal Services. She also voted in favor of a bill introduced by the California Legislative Jewish Caucus that provides $15 million in assistance to nonprofits at risk of hate-motivated violence.

“We’ve had a great working relationship with her,” Jesse Gabriel, vice-chair of the caucus, told JI. He added that Smith’s intelligence and thoughtfulness make her a strong ally for the Jewish community.

In her support of Israel, Smith said that she looks forward to heading to Washington and “ensuring that our one ally in the Middle East that still has a wonderful, liberal, functioning democracy is something we’re standing up and fighting for.” The congressional candidate added that a two-state solution is “the way to go,” but should be organic, rather than imposed by Washington. Smith further noted that she opposes both conditioned aid to Israel, and the BDS movement “as means of creating pressure in the current context.”

Smith is expected to make it onto the ballot for the May runoff election, but it remains to be seen whether the woman who helped to flip the district will be able to keep it blue.