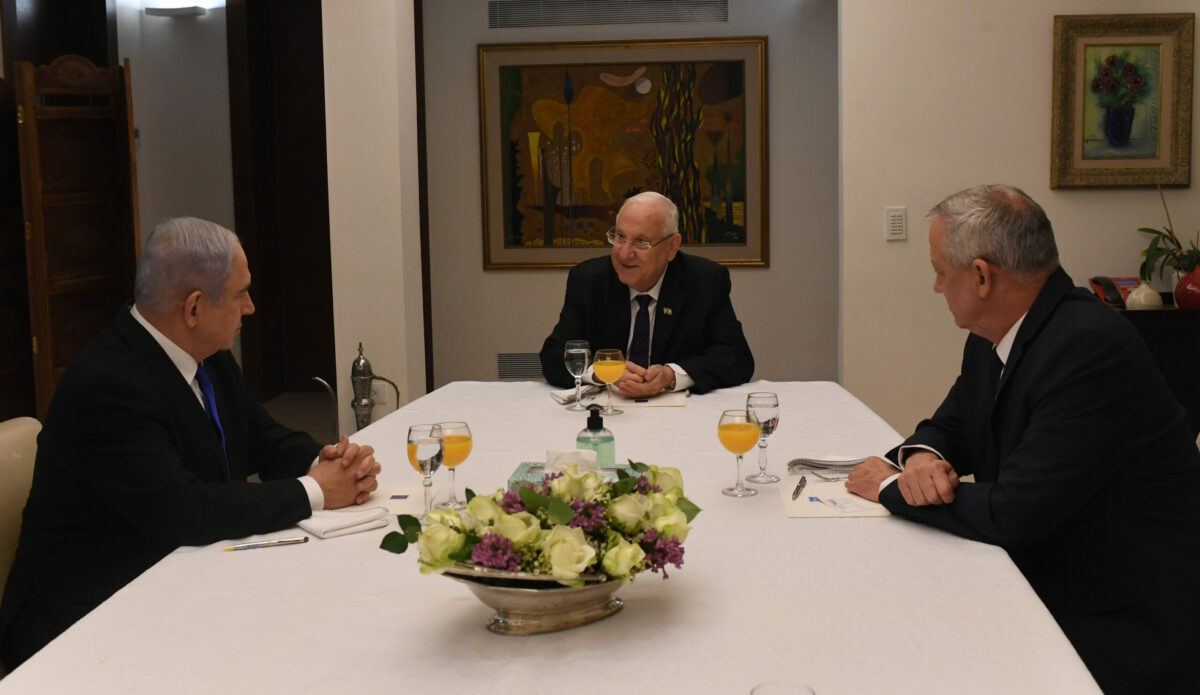 In a stunning turnabout, Israel’s Blue and White Party split in two yesterday, paving the way for Benny Gantz to join Prime Minister Benjamin Netanyahu in an unity government. After a year of political turmoil and three election cycles, Netanyahu appears poised to enter his fifth term as premier.

How it all went down: On Thursday afternoon, Blue and White leader Benny Gantz broke off from his political partners Yair Lapid and Moshe “Bogie” Ya’alon. Gantz nominated himself as the next Knesset speaker after the parliament was forced by the Supreme Court to hold a vote following the dramatic resignation of Likud’s Yuli Edelstein a day earlier. Gantz put himself up for the job in order to block MK Meir Cohen — of Blue and White’s Yesh Atid faction — from being elected to the position and ending unity talks with Likud. Seventy four MKs — including all of Likud — voted for Gantz, while 18 voted against and the rest abstained.

Parting ways: Lapid’s Yesh Atid faction and Ya’alon’s Telem faction officially split from Blue and White yesterday. Lapid exited the party’s Whatsapp group yesterday afternoon, wishing Gantz’s Israeli Resilience faction the best of luck. Later in the evening, Lapid and Ya’alon jointly denounced Gantz’s decision, saying he “betrayed” the will of voters in order to “crawl” into a government led by Netanyahu. Gantz later tweeted thanking Lapid and Ya’alon for their partnership, and saying he made the decision in order to avoid a fourth election “during such a challenging time.”

Why it matters: Gantz’s move paves the way for an imminent three-year rotation agreement to be signed between him and Netanyahu. The Blue and White leader will reportedly serve as defense minister for 18 months until he is slated to replace Netanyahu as prime minister. A Likud member is expected to serve as finance minister, while a Gantz ally will likely become foreign minister.

Coalition wrangling: It was not immediately clear if Netanyahu’s traditional allies — Yamina, Shas and United Torah Judaism — would be joining the unity government. Experts predict that Labor’s Amir Peretz is also likely to join the coalition, splitting off from the alliance formed with Meretz ahead of the last election. “[Yamina’s Natfali] Bennett is flexing some muscles because he wants to remain defense minister, and if he’s not defense minister then he wants to be finance minister,” Jerusalem Post diplomatic correspondent Lahav Harkov told JI. “So maybe there will be some sort of blow up… but I think in the end Bennett will prefer to be in the government than in the opposition and will go with [Netanyahu], even if it means he’ll be humiliated for the umpteenth time.”

The winner: Netanyahu is close to fulfilling his plan to remain in power during his corruption trial, retire on his own terms, and revel in his success to dismantle the “anyone but Bibi” camp since losing his Knesset majority last April.

Call of duty: Ari Harow, a member of Likud and former chief of staff to Netanyahu, tells JI: “Unity is what the people of Israel have wanted for some time, and with the current coronavirus crisis, unity was a necessity. Gantz did the right thing for the country by bringing a much-needed sense of unity. Politically, he was out of options.” Harow pointed out. “He would have faced a difficult challenge to his leadership within the Blue and White party had we gone to a fourth election.”

Betraying voters: Dahlia Scheindlin, an international public opinion analyst who worked for the Joint List as a researcher in the March 2nd election, told JI that Gantz “seemed to have been frightened” about forming a minority government with the support of the Arabs MKs to oust Netanyahu. Scheindlin noted that Gantz campaigned almost exclusively on committing to get Netanyahu out of office, “and the only thing voters actually knew about him, he’s not held up.”

Explaining Gantz: Haaretz reporter Anshel Pfeffer posited that Gantz was simply “exhausted” after three elections, and “the relentless smear campaign orchestrated by Benjamin Netanyahu.” He says the prime minister took advantage of Gantz’s patriotism to convince him that the coronavirus pandemic demands a unity deal.

View from Washington: Jason Greenblatt, former White House Mideast peace envoy, told Jewish Insider’s Jacob Kornbluh that the Trump administration has shown “time and time again” that it stands behind Israel and its duly elected government. Greenblatt, who is now an outside observer with ties to the administration, called it “heartening” to see Gantz work toward a unity government with Netanyahu. “This unity is needed now more than ever,” he stressed. “It gives me hope that if this effort is successful, perhaps peace might be possible between Israel and the Palestinians, and Israel and its Arab neighbors. I am very glad to see Prime Minister Netanyahu and Speaker Benny Gantz trying to work together during these very difficult times.”